911 calls not enough to shut down Kensington drug corners

One block of East Westmoreland Avenue, one year, 412 calls to 911

How many 911 calls does it take to stop illegal activity in your neighborhood?

That’s what some residents in West Kensington are asking themselves after years of reporting everything from idling vehicles to drug-fueled shootouts. Behold the anatomy of one crime-ravaged street, as told through a year of 911 call records obtained by PhillyVoice.

Between October 2014 and September 2015, one block of East Westmoreland Street logged 412 phone calls to the police, an average of 1.13 calls a day.

• and dozens of other concerns

The numbers appear to reflect the neighborhood at large.

West Kensington straddles the 24th and the 25th police districts, rubbing shoulders with the Fairhill section, aka The Badlands. In these areas, conventional wisdom holds that “no snitching” is the law of the land. See something? Say nothing.

But it’s not unusual for the 24th district, which spans West Kensington to Port Richmond, to receive more than 10,000 calls to 911 in a month. In April, the dispatch center recorded 6,641 calls in just one service area that covers West Kensington. (Note: Philadelphia’s 911 call information is not yet available through the city’s open data initiative. But police usually share their dispatch numbers with residents at district meetings.)

Behind closed doors, call data suggests that some residents practically have the police on speed dial. Their daily concerns range from trivial to life-threatening. In the predominantly Latino Badlands, 25th District Police Captain Michael Cram said his experience often contradicts the widespread notion that low-income minority communities don’t report crimes. More surprising is who picks up the phone.

“We love our cops in the 24th and 25th. They’re just totally outnumbered. If the city can do anything, it’s to bring in more cops.” – Donna Aument, 33rd ward leader and lifelong Kensington resident

“If you see our crime victims that actually report crimes against them, you’d be like, ‘Oh my God.’ Some have been locked up 10, 15, 20 times,” Cram said. “They report the crimes.”

For some folks trapped in these areas, however, it’s easier – and safer – to look the other way, especially with regard to everyday drug dealing.

“Neighbors don’t feel safe coming forward providing information to the police,” said one longtime resident near East Westmoreland Street, who spoke on condition of anonymity for fear of retribution. “They’ve done so in the past, which resulted in little or no action, and its gets them in trouble with [drug] dealers.”

Police say they rely on anonymous tips to crack down on drug and gang-related activity. But that requires a trust that some residents feel isn’t always strong. One time, the resident recalls placing a 911 call to report open-air drug activity near his home. When the cops showed up, an officer allegedly told a drug dealer that a neighbor within eyeshot had called the police. Threats to “snitches” later made their way down the block, the resident said.

There were homicides two days apart last August near this block of East Westmoreland Street. Neighbors said it was the result of a drug beef gone rancid. District police’s number-one priority is to break up drug-trafficking blocks where gun violence threatens to erupt, but even with a constant patrol, business resumes right next door. 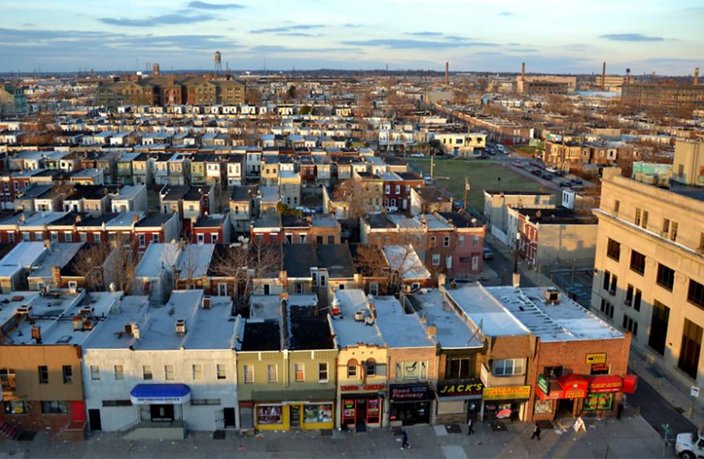 The view from Kensington and Allegheny avenues looking north over East Westmoreland Street, in West Kensington. More than 6,600 calls to 911 were made in April in just one service area that covers West Kensington, dispatch records show.

'IT'S CLEAR THAT SOME OF US CARE'

It’s no secret. Calling 911 on drug dealers isn’t going to resolve the conditions that have turned Kensington and Fairhill into a drug mecca over the last four decades. Nor can police arrest their way out of the problem.

Nonetheless, cops continue to book an astonishing number of alleged offenders. Last year the 24th and 25th districts made a combined 5,824 narcotics arrests, only a small decrease from the years before, even after the city’s new marijuana decriminalization policy went into effect. Yet the area’s drug trade is still booming. Meanwhile, the 26th district, which covers Fishtown and South Kensington, reported just 529 narcotics arrests last year.

For some, that’s a source of despair. For others, it’s a fact of life to be worked around in more creative ways.

“It fits the stereotype of Kensington,” the same resident said. “You hear it all the time. ‘Those people’ want the neighborhood to be that way. ‘Those people’ are the reason that Kensington stays infested with drugs and crime. But if you look at the data, I think it’s clear that some of us care, that we don’t want the neighborhood to be this way.”

Other neighborhood stakeholders – like Donna Aument, the 33rd ward leader and lifelong resident of the neighborhood – say that neighbors need to be more vocal about supporting the police.

“We love our cops in the 24th and 25th. They’re just totally outnumbered,” she said. “If the city can do anything, it’s to bring in more cops.”

In April, Police Commissioner Richard Ross confessed that the department was short about 400 officers, a manpower gap that has been felt by districts citywide. On top of that, cops (both on and off the record) have bemoaned the “Ferguson Effect,” the sense that they’re being heavily scrutinized in the wake of the Black Lives Matter movement across the country.

“I’m not saying that every cop out there is perfect, but [neighborhood residents] do have to support them a little better than they do,” said Marnie Aument-Loughrey, Donna’s daughter and a community organizer at the Kensington Independent Civic Association. “And they have to stop worrying about whose rights are going to get infringed on a little bit when they’re trying to stop the illegal drug sales.

“Our children's’ rights are more important than the criminals.”