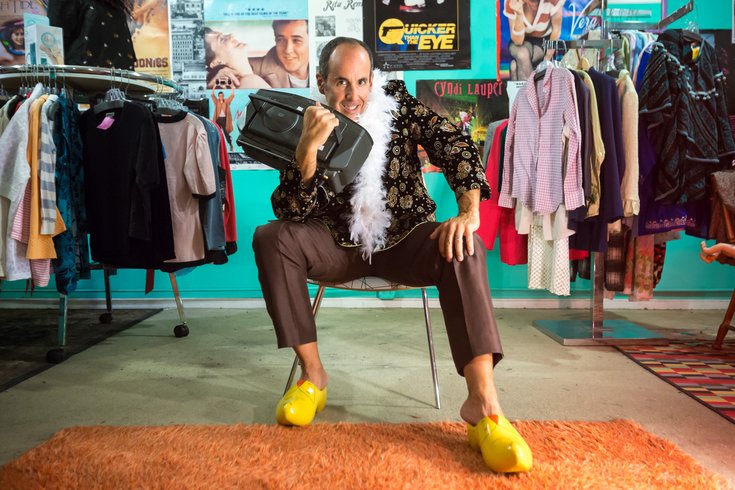 Behind the lumbering doors of the three-floor shop at 5th & Passyunk is far more than just a massive collection of whimsical, quirky, and vintage second-hand goods.

“I was a teenager in the queer community when AIDS hit. We were just watching people dying left and right and not even knowing what it was. We always said that we were AIDS activists and junk lovers, so we put the two together and this is what we created,” remarks manager and co-founder Christina Kallas-Saritsoglou.

RELATED READS: Never have men's hand-me-downs looked this good | 5 worst things you could say to a DJ | Internal reflection: Idol Light jewelry is much more than meets the eye

Since starting the shop 12 years ago, Philly AIDS Thrift has raised over $2 million for AIDS-related organizations and blossomed into a Philadelphia institution for lovers of eccentric and hard-to-find clothing, overlooked records and weird artifacts. 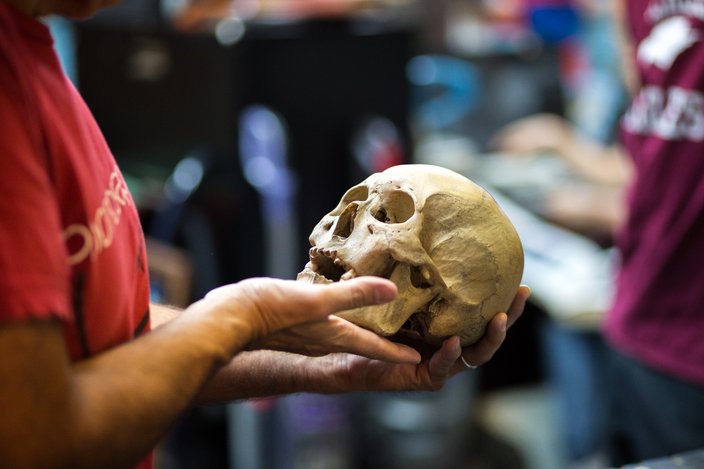 One unusual item at Philly AIDS Thrift is a human skull, believed to be of a 26-year-old Malaysian man. The item is not for sale.

This skull belonged to a 26 year old Malaysian man. It was a retirement gift this guy got from his job and when he passed away, his wife didn’t want it in the house anymore. We don’t sell it because we don’t know if there any laws around selling human remains.” -- Adam Proctor, manager

While there is certainly a plethora of things on hand at Philly AIDS Thrift, it’s clearly not just about the weird and fantastic items. A genuine sense of community oozes out of every pore of the place, with regular shoppers laughing and joking with employees throughout the store.

“We wanted to create this fun, safe place and make a difference in the community. There’s a lot of space here that’s not used for actual selling. We have tons and tons of regulars that come by to hang out with the staff and talk,” Kallas-Saritsoglou adds.

Starting off in 2005 as a threadbare operation in a tiny building just around the corner from their current location, AIDS Thrift has expanded to include pioneering gay bookstore Giovanni’s Room as well as an HIV testing center on premises.

When famous trans-rights activist Donna Mae passed away, AIDS Thrift received her wardrobe and polaroids of her in the various ensembles. People drove far and wide to buy her clothing once it was announced that AIDS Thrift had it, but now the polaroids remain.

At the time when it opened, Giovanni’s Room was one of the first openly gay bookstores in America and received its fair share of hate. 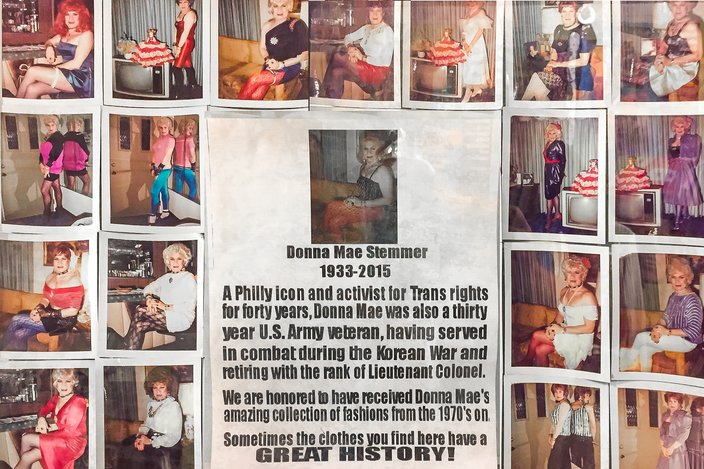 A photo illustration made from a tribute to Donna Mar Stemmer, which hangs on the second floor of Philly AIDS Thrift.

“Cars used to stop at the red light to throw bricks at Giovanni’s Room. The original owner saved all those bricks over the years and used them to pave his garden,” Kallas-Saritsoglou said.

Robert Del Femine, known widely amongst the DJ community as “Del,” is all too familiar with the impact of AIDS in the gay community. Del’s brother, Jimmy Del Femine, was an accomplished light-man at one of the first major disco clubs in Philadelphia, and died of AIDS in 1989.

“Jimmy asked me to go to Giovanni’s Room to get him literature on treatment when he is in the hospital. This was all pre-internet, of course, and all the information was printed in staple-bound little pamphlets. We’ve come a long way since then,” said Del.

Besides being an avid DJ, Del’s career at Johnson & Johnson gives him unique perspective on healthcare and AIDS treatment.

“If you have HIV and get diagnosed and treated early, we’re finding that now it only affects life expectancy by about 24 months.”

Del has had countless gigs since his first gig filling in for a DJ running late in July of 1978.

“My brother Jimmy called me and said, ‘Don't tell mom where you're going. Grab records and come to the club.’ I played for two hours and made $50.”

Tomorrow night, Del joins the lineup of WKDU’s 14th annual Electronic Music Marathon for a special remote broadcast disco party from the Philly AIDS Thrift store. All weekend long, WKDU will be raising money for AIDS Thrift and the station by hosting a who’s who of Philly DJs around the clock.

Check out some looks comprised of 100 percent AIDS Thrift clothing below and get ready to boogie!

Tune into WKDU all weekend long at 91.7 FM in Philly or listen on the webstream to catch the action.