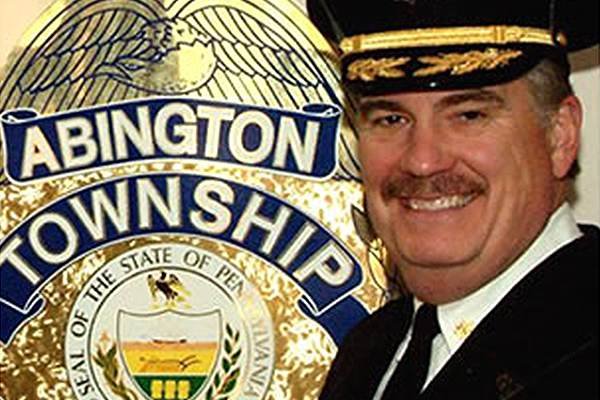 While getting credit for your accomplishments always feels good, pleading for it often comes off as needy and tacky.

To recap from our story written by John Kopp later that day, Kelly took to the airwaves to diss media outlets who – in his estimation – “deleted the race of the individual when they were telling the story” of a 32-year-old man who allegedly pulled out a revolver and urged his police officers to shoot him late Sunday night.

In a nation wrought with tension over law enforcement’s relationship with the communities they took an oath to protect and serve, it’s a tinderbox-type story that could’ve been a positive one.

It could’ve been fashioned as evidence that police seek to de-escalate at a time when critics maintain – justifiably, in many cases – that they’re more apt to shoot first.

It could’ve been a case study in officers using compassionate logic to save a suicidal man’s life.

It could've been used in training when best practices to avert "suicide by cop" scenarios are discussed.

Why’s that? Kelly’s complaint was apparently bogus in the first place.

While Kopp noted that we don’t know what Kelly or his department’s spokespeople said in phone or in-person interviews with other reporters – the chief didn’t return his calls on Wednesday – one peculiar detail quickly surfaced.

If you read the “Armed, Suicidal Subject Confrontation” press release issued under the Abington Township Police Department letterhead, you will see many details about the case.

That officers got into a “physical altercation with a suicidal subject.”

That the male “took a revolver out of his jacket pocket” when talking to police.

That police “immediately grabbed the gun and attempted to disarm him but he resisted and began to fight.”

That, during the ensuing struggle, “the weapon was discharged in a safe direction, causing no injuries.”

And that charges are pending. 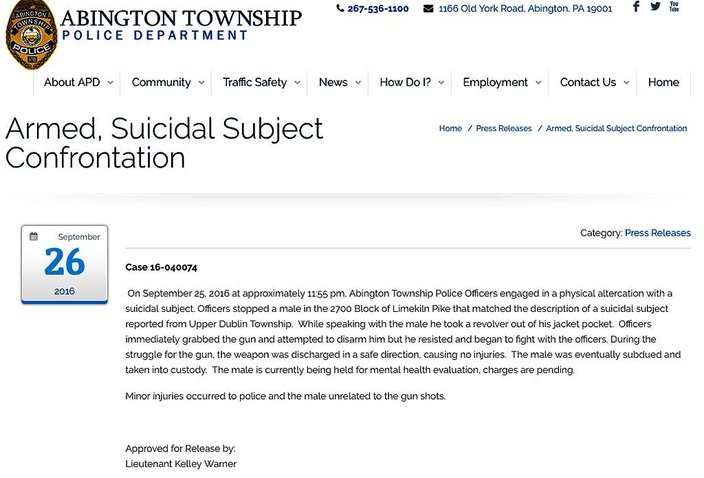 Listen, I get it. Your officers did a great job diffusing what could’ve been a deadly encounter. They should be lauded for providing a case study in what should become the norm for departments across the country – regardless of the race of those involved on either side of the confrontation. And, y'all need all the positive spin you can get these days.

I’ll even side with the legion of anti-PC commenters who loathe a journalistic penchant to strip race from suspect descriptions in crime stories, something that’s irked me for years now, and factored, I think, into the chief’s comments. Despite arguments to the contrary, that doesn’t unnecessarily paint a blanket demographic picture of criminality; it’s a necessary detail to help police capture alleged criminals.

But when you accuse “the media” of stripping details from a story that weren’t provided in the first place, at least in your publicly available version of the events, you distort a valid issue and invalidate the argument you were trying to make to a radio audience with a pro-law-enforcement, conservative bend.

Sure, they’ll eat it up, but that’s not what this story should’ve been about.

What Kelly did was take a commendable example of police doing what they’re supposed to do (and doing it well) and distort it into a whiny straw-man rant.

What they’ll remember (if people are even still talking about this by Monday) is Kelly using it as a chance to grumble about the media failing to report something that the department didn’t even report in its press release. That's all because Chief William Kelly wasn't as good at public messaging on Wednesday as his officers were at saving lives on Sunday.

So, kudos to them for their valuable work. I hope their boss doesn't get in the way of getting the credit they deserve next time.

Oh yeah, if you want to know the race of the suspect, you'll have to call Kelly. Seems like he'll be more than happy to tell you.