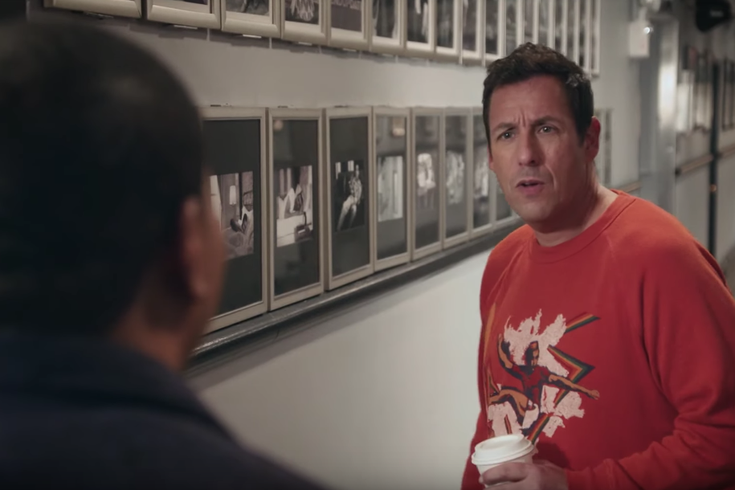 Adam Sandler will host "Saturday Night Live" for the first time on Saturday, May 1.

Adam Sandler is returning to "Saturday Night Live" to host the show for the very first time on Saturday. The sketch comedy show released the promo for Sandler's hosting gig...and it looks like the comedian's being watched.

The promo trailer begins with a nostalgic Sandler taking a trip down memory lane. As he reminisces on his early days on "SNL" with photos from old skits, things take a weird turn when he notices some very candid pictures of him in his home.

Just as Sandler sees an unsettling photo of himself looking at a photo himself, a very creepy Kenan Thompson appears to say in a monotone voice, “Adam, you never really leave.” Thompson then breaks his intensity to say he’s joking before hugging him to reveal ghost-like eyes with the words, “Welcome Home Adam,” on the screen.

Yeah, um, we’re not freaked out or anything. Sandler will host “Saturday Night Live” along with musical guest Shawn Mendes, on NBC at 11:30 p.m.

Sandler began his career on "SNL" as a writer in 1990 and was brought on as a cast member the following year in 1991. After  the 1994-1995 season saw low ratings, he was fired alongside Chris Farley. The comedian has made guest appearances on the show, but this will be his first time hosting.