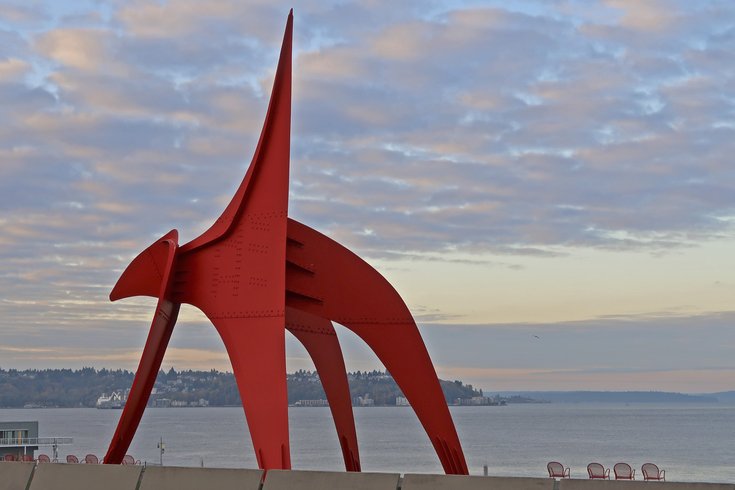 Alexander Calder was a sculptor internationally known for his mobiles. He was born in Lawnton, Pennsylvania, and lived in Philadelphia while attending prep school Germantown Academy. Above is his sculpture "Eagle" displayed in Olympic Sculpture Park in Seattle, Washington.

A new museum for Alexander Calder, artist and Pennsylvania native, will be built on the Benjamin Franklin Parkway in Philadelphia, the Calder Foundation announced Thursday.

Construction of the building, described as a "cultural space," and "sanctuary," will begin in 2021 across from the Barnes Foundation and Rodin Museum, between 21st and 22nd streets. It's being designed by Herzog & de Meuron who re-designed London's Tate Modern, a museum built inside a decommissioned electric factory.

Alexander Calder, who lived from 1898 to 1976, was a sculptor internationally known his moving sculptures, a style christened as mobiles by Marcel Duchamp. Calder was born in Lawnton, Dauphin County, and only lived in Philadelphia for a few months while attending prep school Germantown Academy.

Calder is the youngest of three generations of sculptors of the same name whose artworks are already a part of the fabric of the city. His grandfather, Alexander Milne Calder, sculpted the giant William Penn statue that stands atop City Hall. His father, Alexander Stirling Calder, designed the Swann Memorial Fountain in Logan Square, close to the parkway.

The youngest Calder's work is displayed in the Free Library of Philadelphia and Philadelphia Museum of Art. Works for the new space will be loaned in a rotating display from the Calder Foundation, based in New York, The Inquirer reported.

The Calder museum originally was proposed two decades ago but stalled until now. Former governor and Philly mayor Ed Rendell was among those who lead the push for a Calder museum in 1999.

"There’s no doubt in my mind that Philadelphia is the only place for it," Rendell told The Inquirer. "Calder’s influence is felt all over the city, particularly in City Hall. This may be the final piece of the puzzle for the Parkway."

Not much else is known about the space except that it is tentatively named "Calder Philadelphia."