All-Sport Power Rankings: Ohio State on top of the world

From Buckeyes to Cowboy haters, a look at who's having the best week in sports

In sports, much stock is put into a team's record. Often, however, the best stories in sports deal with more than just wins and losses. With that in mind, I decided to start a new type of power rankings, one that takes into account general awesomeness and not just on-field success.

After beating Oregon to win the first National Championship of the playoff era, their first title since stealing one from the Miami Hurricanes in 2002, would be reason enough to push them to the top of the list. Add in a third-string quarterback and a running back in a crop-top, and the competition isn’t even close.

The Pistons started the season looking like they would contend with the Sixers for the worst record in the NBA. Then they cut veteran forward Josh Smith. Just cut him. Nothing in return.

Since then, they’ve won nine of their last 10 games, including a 13-point win at the Mavericks on the second* night of a road back-to-back.

Former Dolphins player Rob Konrad is more of a man than you are. Don’t take that personally. He just is.

While fishing off the coast of Florida, a large wave tossed Konrad from his boat and into the water. Nine miles off shore, without a life jacket, and his boat motoring away on autopilot, Konrad was left with one simple choice: sink or swim.

So Konrad swam - for sixteen hours … in the dark … with sharks and jellyfish - until he finally made it back to land. That’s the stuff of legends.

Here's an excerpt from the story on ESPN.com:

Konrad said he got bit "by a whole bunch of stuff." A shark circled before moving along.

"There was a lot of stuff glowing at night, probably some jellyfish," he said.

He could also see lights along the coast and pick out landmarks. As he tired, he gained emotional strength.

Twice he was nearly rescued. A recreational fishing boat approached to within 50 yards, but Konrad couldn't flag it down. Then a Coast Guard helicopter searching for him flew overhead.

"They had their lights on me and kept going," Konrad said. "They didn't see me. That was a difficult time." [via espn.com]

Winter in Ohio can be harsh. LeBron knows this. He’s from Arkron. He also spent his last four winters in Miami, so he a frame of reference for just how pleasant it can be this time of year in other parts of the country. Making this winter extra harsh is the fact that the Cavaliers are in free fall, losing their last five games* and nine of their last 11, and currently find themselves in sixth place in a very weak East.

*Including a loss to the Sixers

But don’t worry about King James. He’s not there. After injuring his back earlier this month, LeBron went to - you guessed it - Miami for rehab and even made an appearance at the National Championship on Monday night to cheer on his Buckeyes. 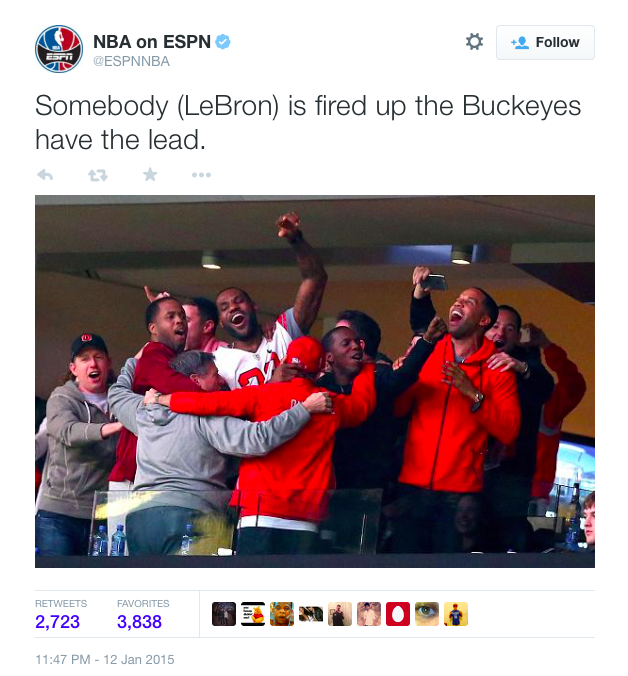 He could return to action Tuesday night, but that would be with a somewhat different looking group of teammates, as the Cavs traded away Dion Waiters for J.R. Smith and Iman Shumpert and also acquired center Timofey Mozgov from the Nuggets.

They’re one of two remaining undefeated teams in college basketball, but have struggled the in SEC play early, needing overtime against Ole Miss and two overtimes to beat Texas A&M. They shouldn’t have too difficult of a time with the rest of the conference since No. 19 Arkansas is the only other ranked team in the SEC.

This was a big week for Chipper. Not only did he muscle Howie Roseman out as Eagles GM - while taking over personnel management - but he also go to fly down to Arlington to watch his guy, Heisman winner Marcus Mariota, play for the National Championship. 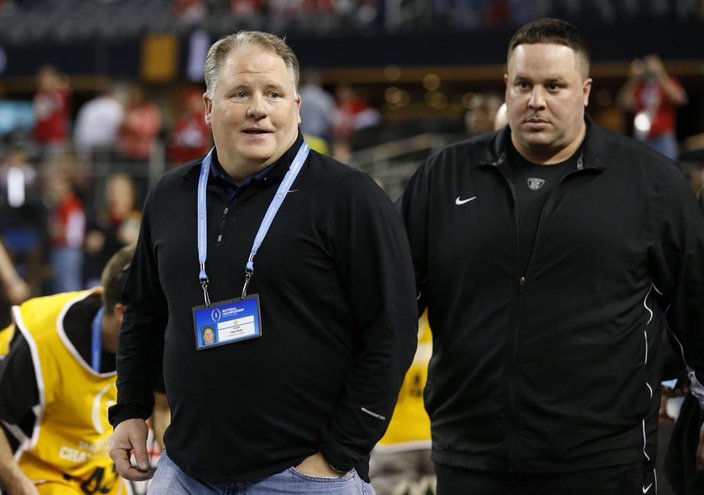 But, Matt, Oregon lost and Mariota didn’t play that well?

Precisely. Mariota’s struggles certainly didn’t help his draft stock, which is music to Chip’s ears. If the Eagles coach truly has his sights set on his former quarterback, he’ll have a lot of other teams to compete with, regardless of how Mariota played Monday night. With that poor showing, however, the Hawaiian may have inched slightly closer to potentially becoming an Eagle. For Chip, that’s a win.

Not to mention, a Ducks’ win would have led to several columns talking about how Oregon is better off without Kelly, and I can’t imagine him enjoying that.

According to a report in The Philadelphia Inquirer, the university, state officials and the NCAA are discussing a settlement that could result in the the Joe Paterno’s 111 wins, which were wiped from the record books in the fallout of the Jerry Sandusky scandal, being restored. As a graduate of the University of Miami, another school that was terrorized by Mark Emmert and the NCAA, I’m pulling for you guys. Sure, I root against you every Saturday, but those sanctions were patently absurd. And I’m always a fan of seeing a greedy, hypocritical, power-obsessed institution having to admit it was wrong.

Come on, haven’t you ever wanted to pepper-spray an Ohio State fan?

The Flyers snapped a six-game losing streak Monday with a 7-3 win over the Lightning, but winger Jake Voracek has been hot throughout. The 25 year old currently leads the league in points with 52, and was voted into his first NHL All-Star Game over the weekend along with teammate Claude Giroux, who is tied for second in the league with 48 points.

The UFC's light heavyweight champ, who entered rehab for cocaine abuse last week, had the fastest recovery in the history of addiction. According to the fighter's mom, Jones is not only out of rehab after one day, but he'll be at the Patriots-Colts game this Sunday. Good for him, I guess?

When isn't this guy winning? 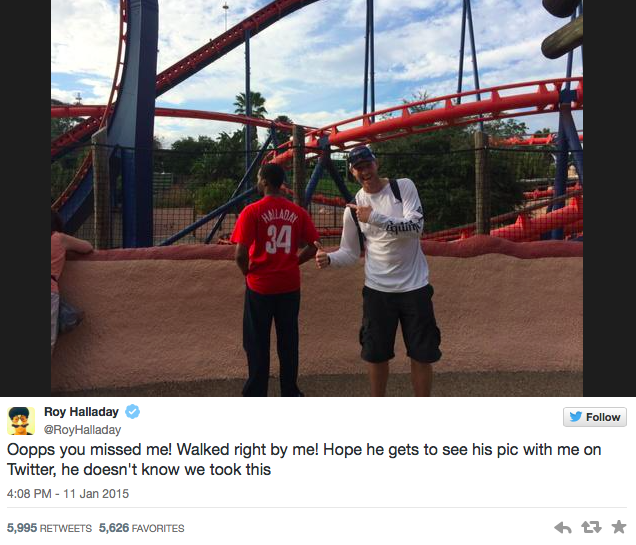 Every NFL fan across the nation - except for those that cheer on the Cowboys - seemed to be united against Dallas Sunday afternoon. Thanks to an obscure NFL rule and a one-legged Aaron Rodgers, this weekend will be a Cowboys-free zone. That means no Jerry Jones. No Chris Christie. No Tony Romo. No obnoxious Cowboys fans to make fun of.

Wait, are we sure that's what we wanted? It sounds like all the fun has been sucked out of the NFC Championship.