Rob McElhenney, Glenn Howerton and Charlie Day are taking their popular show on the road this fall 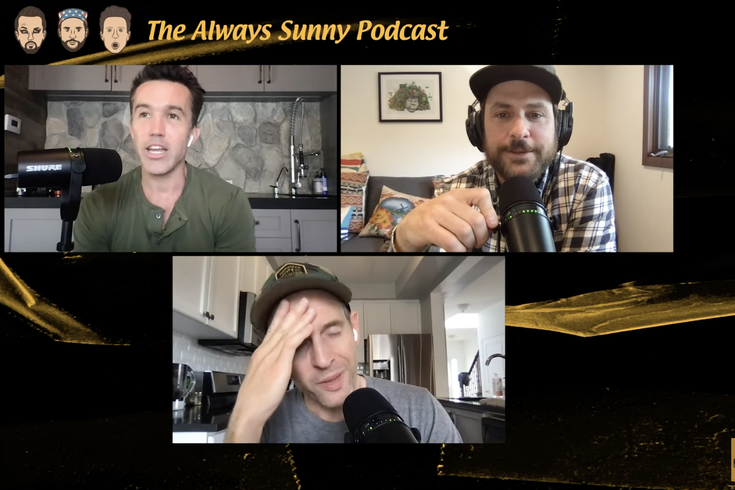 Rob McElhenney, Glenn Howerton and Charlie Day will bring 'The Always Sunny Podcast' to The Met Philadelphia for an in-person taping on Sunday, Sept. 18, 2022.

Diehard fans of "It's Always Sunny in Philadelphia" may want to save Sept. 18 for a special appearance of "The Always Sunny Podcast" at The Met, where The Gang is now slated to hold an in-person taping of the show.

Rob McElhenney, Charlie Day and Glenn Howerton will be on hand to continue their journey through 15 seasons of the record-breaking FXX series. The podcast features episode-by-episode analysis of the sitcom, from memories about the writing process to the hijinks and magic on set.

It also has its fair share of moments that can only be described as great friends being idiots together.

Listener, creep, whatever you are. Thanks for hanging out with your buds at The Always Sunny Podcast.

To date, the podcast has charged through 36 episodes and amassed a cult following not unlike the series itself, which is now the longest-running live action sitcom in American TV history. At one point, "The Always Sunny Podcast" edged out "The Joe Rogan Experience" as Spotify's top podcast on the streaming platform.

“We’re really excited to take this show on the road, and bring the Podcast to Bourbon & Beyond in Louisville and the iconic Met Philadelphia," said Glenn Howerton, who plays Dennis Reynolds on the show. "There’s nothing we enjoy more than being in the same room as all the amazing Sunny fans out there!”

The show at The Met is the second of two planned that weekend, beginning with a Saturday appearance at the Bourbon and Beyond Festival in Louisville, Kentucky on Sept. 17.

Since its debut in 2005, "It's Always Sunny in Philadelphia" has followed The Gang through years of misanthropic adventures based out of the fictional Paddy's Pub in South Philadelphia. The show's distinctive blend of satire and black comedy gets recast in a new light on "The Always Sunny Podcast," giving listeners uncensored access to the derangement of the stars.

It's not yet clear whether co-stars Kaitlin Olson and Danny DeVito might make an appearance at The Met. Tickets go on sale at 10 a.m. on Friday, June 17.

'The Always Sunny Podcast' at The Met Philadelphia