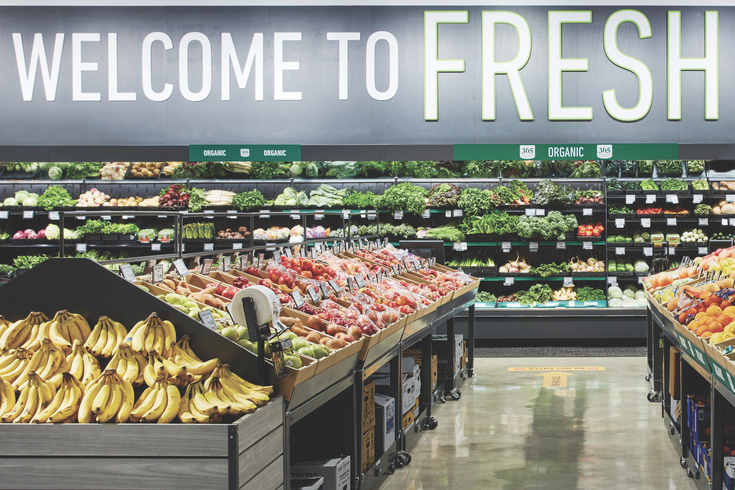 Amazon Fresh is preparing to open a supermarket at the Broomall Commons Shopping Center in Delaware County. This will be the concept's second store in Pennsylvania after the first opened last year in Warrington, Bucks County.

An Amazon Fresh grocery store, the burgeoning supermarket concept from the e-commerce giant, is expected to open in the near future at a shopping center in Delaware County.

Signage for the grocery store went up this week at the Broomall Commons Shopping Center, 2940 Springfield Rd., next to the Planet Fitness and PetSmart stores.

Amazon Fresh spokesperson Laura Hayes confirmed that the store is coming to Broomall, but the company did not provide a timeline for a grand opening.

Amazon's lower-cost supermarket has been in the midst of an expansion and currently has 29 locations in six states after opening its first store in California in 2020. The only Pennsylvania store open at this time is in Warrington, where Amazon Fresh opened its doors at the Creekview Center last August.

The company is expected to open another store in Bucks County inside the former Kmart on Street Road in Bensalem.

In Philadelphia, an Amazon Fresh has been rumored for the ground floor of a mixed-use development project at the corner of 5th and Spring Garden streets in Northern Liberties. The company also applied for a Pennsylvania liquor license at another location in the Red Lion Plaza on Roosevelt Boulevard in Northeast Philly, meaning it could have plans for another store at a property there.

One of the major selling points of Amazon Fresh is its seamless online shopping experience for both pickup and delivery, including free same-day service for Amazon Prime members.

The store's Dash Cart also provides an appealing option for small- to medium-sized shopping trips, with a digital display that keeps track of a shopper's total cost as items are added to the cart. Those who use Dash Carts can skip the checkout line for easier payment.

In contrast to Amazon's Whole Foods brand, Amazon Fresh appeals more to middle class customers and emphasizes speedier fulfillment of online orders. A section of the store is also dedicated for the pick-up and return of Prime packages.

Amazon's push to enter to the grocery space is part of the company's larger strategy to compete with Walmart and others by utilizing its vast network of fulfillment centers and warehouses for speedier service.

In March, Amazon announced it would shutter all 68 of its 4-star, Books and Pop-Up locations as part of a shift in its brick-and-mortar strategy. A greater emphasis on Amazon Fresh and Whole Foods markets may become more of a priority for expansion.

Those interested in working at Amazon Fresh can check out the company's job listings, which have been posted for the upcoming locations in Broomall and Bensalem.