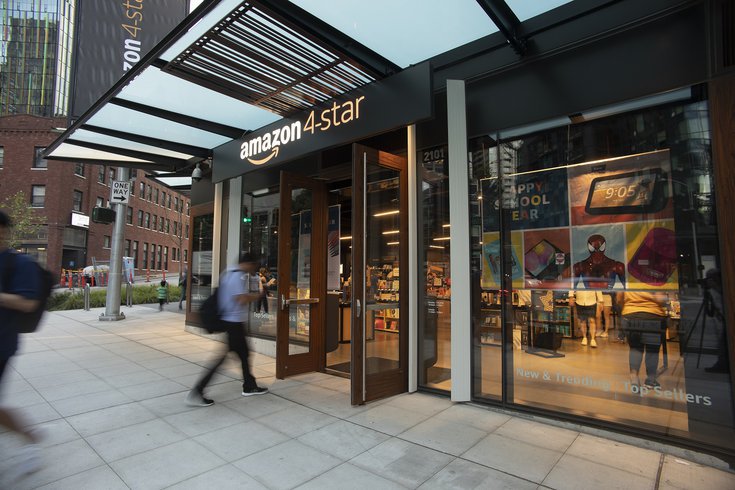 Amazon will close all 68 of its 4-Star, Books and Pop-Up physical locations as part of a shift in its brick-and-mortar strategy.

An Amazon 4-Star store that was set to open at the Cherry Hill Mall this year will not see the light of day.

The tech giant will close all 68 of its 4-Star, Books and Pop-Up locations in the United States and United Kingdom as part of a shift in its brick-and-mortar strategy, Reuters reported.

Amazon said its Amazon Go, Amazon Fresh and Whole Foods Market locations will not be impacted by the reorganization. The company also is expected to shift its focus to a burgeoning department store brand called Amazon Style.

Representatives from the Cherry Hill Mall and its owner, PREIT, did not immediately respond to requests for comment.

The 4-Star store at the Cherry Hill Mall was scheduled to open in the first half of 2022 between Armani Exchange and MAC in the Macy's wing. The store has been listed as "coming soon" on the mall's website with no specific opening date.

Amazon rolled out its 4-Star stores in 2018, but the retail concept only accounted for a small percentage of the company's overall revenue.

Described as "a place where customers can discover products they will love," the 4-Star shops have featured an assortment of the company's best-selling products. Everything sold is rated four stars and above, considered a top-seller or a trending product.

The products include consumer electronics, kitchen and home products, toys, books and games. Customers also can pick up and return online orders, and Amazon Prime members can get online discounts for in-store purchases.

Amazon has opened 33 4-Star stores in 17 states, including two locations in New Jersey. No stores have opened in Pennsylvania. The company had plans to expand to 43 stores in 21 states.

Despite the dissolution of the Cherry Hill store, Amazon still plans to expand its retail footprint in the Philadelphia region.

The company has opened an Amazon Fresh grocery store at the Creekview Center in Warrington, Bucks County. Another is coming to the Brookwood Shopping Center in Bensalem, but an opening date has not been set.

Amazon applied in November for a Pennsylvania liquor license for a space located at the Red Lion Plaza on Roosevelt Boulevard in Northeast Philly, fueling speculation that the city might be getting its first Amazon Fresh grocery store.

There's also been speculation that an Amazon Fresh grocery store is planned for the redevelopment of a shopping center in Northern Liberties at the corner of Fifth and Spring Garden streets.