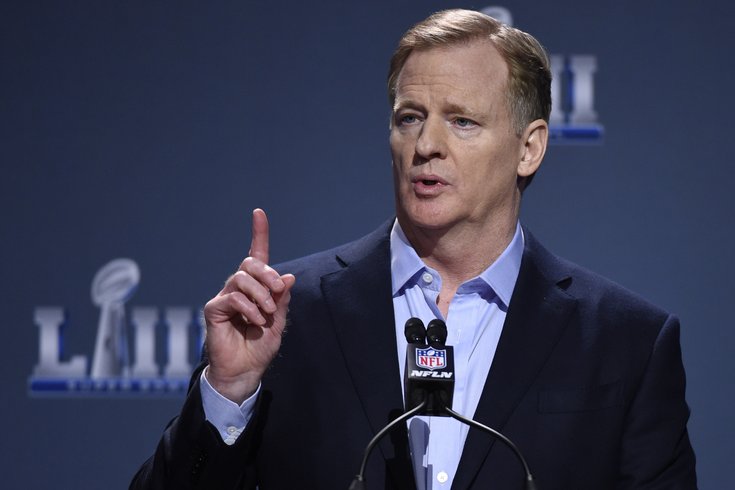 Roger Goodell got what he wanted — a 17-game season.

Goodell makes $40 million a year, but clearly his job description does not require him to respect the 200 million people worldwide who watched last night’s Super Bowl. In fact, based on the past two weeks, his top priority is to insult, at least once a year, the intelligence of every fan who loves professional football.

In a 50-minute news conference in Atlanta that was missing only a juggler and a clown, the commissioner offered his usual babble about how fantastically the NFL is doing – in other words, how wonderfully he is doing – despite the tiny little problems that crop up from time to time.

Unfortunately for him, the problems were not small this time. One of the two teams in the biggest game of the year, the Rams, did not belong there. A historically bad non-call on the final drive by New Orleans in the NFC championship game decided the outcome. The Rams were not worthy. The Saints were.

The tape doesn’t lie, even when the commissioner does. None of the refs saw fit to throw a flag after Nickell Robey-Coleman crashed helmet to helmet into Tommylee Lewis a full second before the arrival of the ball. For the record, that is two fouls, both blatant, both missed.

For 10 days, Goodell offered no official comment on an incident that led to a lawsuit, official boycotts of the Super Bowl in New Orleans and a national conversation that questioned the integrity of the NFL. As is his custom, the $40 million man ducked the questions for as long as he could, even though he said in 2015 that “I’m available to the media almost every day of my job.”

When he finally did speak, he only made the situation worse.

In just those few words – which Goodell had 10 days to prepare – he provided grounds for dismissal in any line of work outside of the idiot-proof NFL. First of all, he let the losing coach present the position of the league? At the emotional peak of a season-nullifying loss? Really? And second, he said he talked to Payton and the players. He was half right.

As Michael Thomas, the top receiver on the Saints, so eloquently tweeted: “He ain’t talk to us.”

Goodell’s army of flaks immediately walked back the comment about the players, saying it was all a big misunderstanding. Hey, for $40 million, you can’t expect the commissioner to speak clearly, can you?

The real story is that Goodell is playing to an audience of 32 – the owners – not 190 million. He doesn’t give a damn about the fans – never has, never will. He is terrible at the simple job of representing with honor a sport we all worship. And he knows it.

Why else would he parade to the microphone representatives of Mexico, England, China, the Weather Channel and a kid – all lobbing softballs designed to show how much Goodell has expanded the reach of the NFL during his brilliant 12 years as commissioner.

That same day, Sean Payton came out of hiding after binging on ice cream and Netflix and reiterated his devastation at the call that wasn’t made, and the Super Bowl that he was unjustly denied.

Under Payton’s jacket was a t-shirt that said more about Goodell that all of the blabber the commissioner could summon for nearly an hour at the Super Bowl. It carried an artist’s rendering of the commissioner with a big, red clown’s nose.

I would like to end this column with a correction. Earlier, I said the only thing lacking from the commissioner’s news conference was a juggler and a clown.

The clown was right there, in plain sight, at the podium.

• I had my problems with Gabe Kapler during his unorthodox first season as Phillies manager, but I believe his explanation for that incident that happened when he was in the front office of the Angels four years ago. He said he had no idea that a 17-year-old girl was sexually assaulted while in the presence of two young players in the Angels organization, and that’s the reason he never reported it to police. Kapler may have some odd quirks, but I have no reason to question his character. That’s why I’m buying the story.

• Maybe I’m a just blind optimist but I think the odds are improving every day that the Phillies will end up with Bryce Harper. The best way to read what’s happening is to study the playbook of Harper’s powerful agent, Scott Boras. The late entry of San Diego last week was vintage Boras – leveraging the best offers with the hint of an even bigger one. The Vegas sports books are predicting that the Phils will win the Harper sweepstakes. That’s good enough for me.

• Hockey has always been a bit of a mystery to me — including the year I was the Flyers beat reporter covering for the Inquirer — but I don’t think even the experts can explain what’s going on right now. After another improbable win Saturday, the Flyers have won seven in a row, their best run in three years. Even better, they have found a franchise goalie, Carter Hart. Wouldn’t you love to know what ex-GM Ron Hextall and ex-coach Dave Hakstol are thinking?

• Chris Long has been an Eagle for only two years, but it’s hard to come up with a single player who has had such a positive impact on his team and the community is such a short tenure. For his exemplary play and his extraordinary charity work, Long won the Walter Payton Man of the Year award over the weekend. Whether he returns next season or not, Long’s legacy as a winner, on and off the field, is secure.

• The end of another football season is always a sad time, but at least we won’t have to hear any more about how wonderful Tony Romo is. This just in: He is not wonderful. In fact, he intrudes on every broadcast with his incessant babbling and even his trademark play-predicting, as he did again during Super Bowl 53. There was a time when analysts were praised for blending into the game, not overwhelming it. I must admit I enjoyed last night’s Super Bowl, though. Thanks to the mute button.