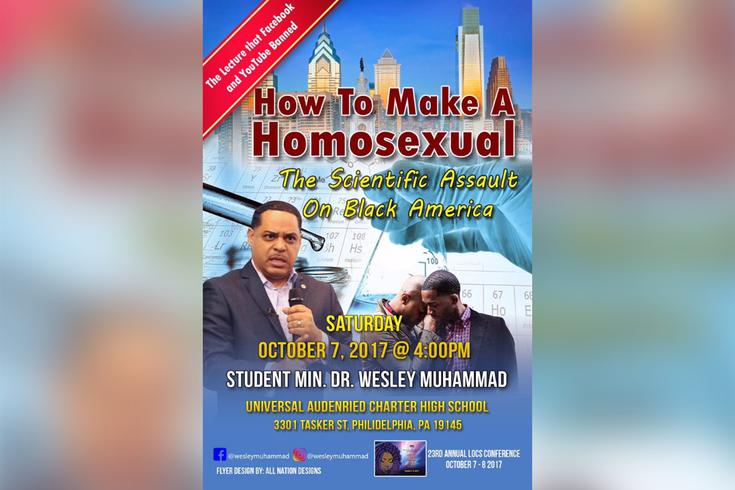 A flyer shared by Wesley Muhammad for a speech he was scheduled to give at a Philadelphia conference. Muhammad has since been uninvited from the conference.

A conference planned at a Philadelphia charter school has disinvited a controversial speaker who claims the United States government has conducted a "homosexualization" of the black community.

Wesley Muhammad was scheduled to speak at the International Locks Conference, an expo on natural black hair, beauty and health taking place Saturday and Sunday at the Universal Audenried Charter High School in Grays Ferry.

According to a flyer distributed online, Muhammad was to give a talk called "How To Make A Homosexual: The Scientific Assault On Black America."

In the caption, Muhammad wrote: "The Homosexualization of the Black Community is one of the clearest and most egregious illustrations of the US Government's Scientific Assault on the Black Man."

But G Philly reported Thursday that Muhammad, who has espoused theories in the past like the government altering marijuana to feminize black men, had been axed from the lineup of speakers.

In a statement to the website, the organizing committee said the topic on the flyer differed from what was agreed upon, and that the views on the flyer don't necessarily reflect those of the committee.

Muhammad confirmed G Philly's report on Facebook, saying his lecture had also been banned on the social media platform and YouTube.

He wrote that he would still deliver anti-Semitic and anti-LGBTQ information from the lecture at a mosque in Delaware. The mosque shared Muhammad's flyer in a separate Facebook post.