After an amazing month ending in a devastating loss, some fans are making it difficult for Philly to shed its reputation 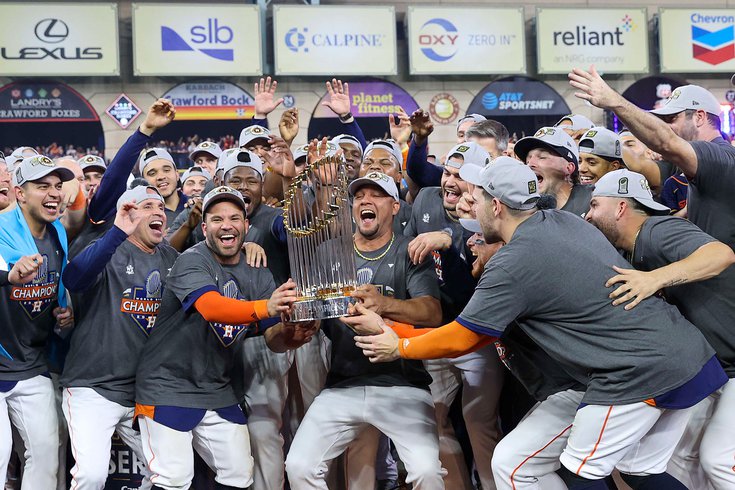 The Phillies fell to the Astros in heartbreaking fashion. And some Phillies fans made sure to make it known with questionable behavior.

I have lived in the Philadelphia area for the last five years. I have grown to love this city, the people in it and the teams that represent the heart of what Philly truly is. I even own significantly more Philadelphia sports apparel than I have for Houston. But as a Houston native, and someone that has a tattoo with the Astros logo, there was no way I could turn my back on my 'Stros this week.

My family warned me not to wear Astros gear until the series was over, especially with me being a 5-foot-2 woman weighing 105 pounds, but I defended the city, saying I am one of them and they wouldn’t hurt me. Now I am starting to realize that some of the stereotypes I have been defending for years might actually be true.

"These complete strangers felt they had a right to touch my body, harass me and even threaten my safety, just for the clothes I was wearing."

This World Series has been a wild ride with highs and lows for both teams. The Astros came into the World Series with a perfect postseason, sweeping both the Mariners and the Yankees. On the other side, Phillies barely made the playoffs thanks to the MLB’s expansion of the postseason and they surprised the world with their outstanding performance.

For the first two games, I flew down to Houston to watch the Phils and the 'Stros start this dream come true series. As someone that enjoys a little bit of instigation, I wore both teams' swag throughout my stay, but at the bars I was decked out in my powder blue Phillies jersey. I got a little bit of heat for it from Houston fans, but nothing outside of a little friendly banter and everyone was in good spirits.

On the night of Game 6 of the 2022 World Series, I went out to cheer on my Astros at a bar on South Street, proudly wearing my Astros hat and tee.

Walking to the bar after finding parking, I was addressed multiple times with people spitting profanities at me, and the game hadn’t even started. Realizing that this might get a little more heated than I would be comfortable with, I chose to go to a bar that was mostly empty, but things got even worse from there.

The friend I was with pleaded with me to not cheer on the Astros and to sit and watch quietly, and even though I felt like that was wrong to expect of me, that’s what I did.

Over the duration of the game I had people come up to my table pulling at my shirt telling me to take it off, and knocking my hat off my head and kicking it across the room. As bad as that sounds, that’s not even what made me scared. Two different grown men, at separate times throughout the game, approached me and told me directly that if the Astros won they would find me after to “beat the sh*t out of me.”

These complete strangers felt they had a right to touch my body, harass me and even threaten my safety, just for the clothes I was wearing.

As I sat and watched quietly, being approached and harassed by Phillies fans, a friend of mine from New Jersey, who was at Game 6 in Houston, had a completely different experience.

Although there were a few fans that tried to be disrespectful, they were quickly put in their place by other Houston fans. Astros fans in Minute Maid park were telling the few rude attendees to “knock it off and enjoy the game” and that “you're ruining it for all of us.” The atmosphere in the park was described as Phillies fans and Astros fans sitting side by side "acting like extended friends" throughout the game.

Leaving the game, my friend walked out in his Phillies jersey and received hugs and compliments on the team's performance. Even the police officers checked on him walking to his car, which is more than I can say for the officers I passed on South Street.

I am shocked, but more than anything I’m heartbroken. How could Philadelphia let me down so hard?

To me, this series was full of love and friendly play as my heart's team played my home team. I am the first to understand that when your team is playing, emotions get involved. But at what point does a wholesome sport like baseball become a reasonable excuse to treat another human being as lesser?

Philadelphia, you have disappointed me. I would have been out on Broad Street climbing poles alongside you if the Phillies had won. Though I never expected you to celebrate with me in my team’s win that night, apparently the world knows you better than I ever did.

Daniyyel Macy is the wife of managing sports editor Evan Macy and is an occasional contributor to PhillyVoice. She can be followed on twitter here.