At South Jersey meeting on GOP health plan, news of a vote delay

If Obamacare is repealed, 43,000 constituents in one district would likely lose health care 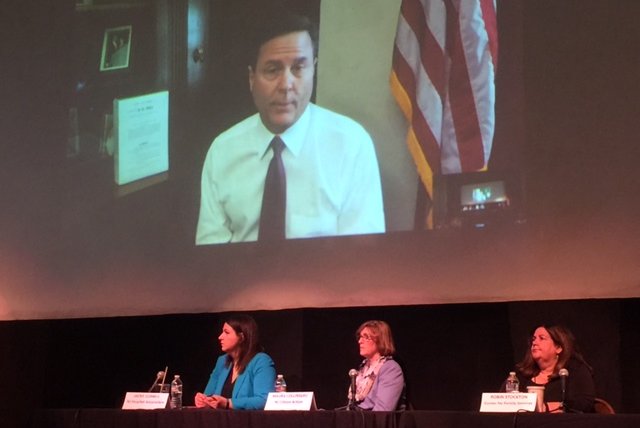 Congressman Donald Norcross appears via Skype from Washington during a community meeting on the Republican plan to repeal Obamacare in Collingswood on Thursday. During the meeting he announced that a vote on the repeal had been postponed – a sign that the replacement plan lacked the votes to pass in the House.

At a community meeting Thursday afternoon on the Republican plan to repeal the Affordable Care Act, U.S. Rep. Donald Norcross, D-1, had a real-time announcement to the crowd gathered in Collingswood:

The House vote, scheduled for Thursday night, was postponed – because GOP leaders lacked the votes to pass it.

Norcross made the announcement via Skype from Washington, where he had been prepared to vote against the repeal of Obamacare. The news was greeted with applause by the supportive crowd of about 100.

In a count by The Associated Press, at least 30 Republicans said they opposed the bill, enough to defeat it. But the number was in constant flux amid the 11th-hour lobbying. Including vacancies and expected absentees, the bill would be defeated if 23 Republicans join all Democrats in voting "no."

The only Republican member of the House from New Jersey to declare support for the GOP replacement plan is Rep. Tom MacArthur, R-3rd.

During the community meeting, Norcross joined with representatives of the New Jersey Hospital Association, New Jersey Citizen Action, the Center for Family Services and New Jersey AARP to speak against what he called "Trumpcare."

All spoke about the harm that would result under the Republican plan in Norcross' district, where an estimated 43,000 residents would lose health coverage.

But most compellingly, the crowd heard from Chuck Garrity, 44, a former health care executive who lost his job 18 months ago and has been covered by the ACA ever since. Recently, however, he discovered he and his children have a genetic disease that wouldn't be covered under the Republican plan.

Having health insurance has enabled him to focus on opening a craft brewery in several months that will create jobs and generate taxes, he said.