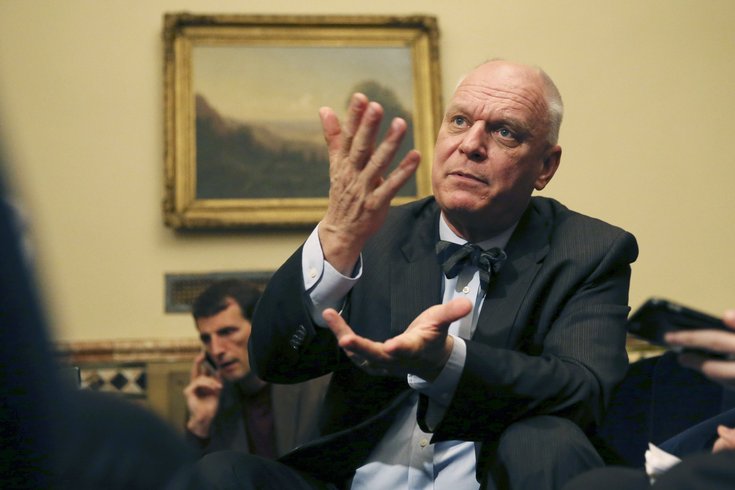 Atlantic City Mayor Don Guardian answers a question as he waits in the Statehouse for the New Jersey Senate and Assembly to go into session Monday, March 14, 2016, in Trenton, N.J.

City Hall in Atlantic City will shut down April 8 until May 2, leaving non-essential employees without a paycheck for three weeks, Mayor Don Guardian announced Monday.

According to the Press of Atlantic City, city officials had warned in Trenton earlier in the day that the financially strapped shore town would be unable to continue paying city employees after April 8 if they can't raise more money to pay them.

The Press reported, Guardian put out a statement later Monday afternoon saying the city would close at 4:30 p.m. April 8 and will reopen on May 2 when the city expects to get its next payment of quarterly taxes.

Essential employees, such as police and fire, will continue working through the closure and be reimbursed once it concludes.

The mayor said in Monday’s announcement he would continue to seek options from the state in order to avoid the April deadline. The city's poor credit makes it nearly impossible for it to get a bank loan.

Guardian and his chief of staff Chris Filiciello were in Trenton on Monday to meet with state legislators to find ways to avoid the city's financial "day of reckoning," as the mayor put it, according to the Philadelphia Inquirer.

Filiciello told the Press the city is "running out of money" and that "everyone is in trouble."

One of the possible stop gaps discussed was a bridge loan. The state let Atlantic City borrow $60 million in 2014 to continue paying employees and the loan was paid back, the Inquirer reports.

Monday's announcement also comes before New Jersey voters take to the polls in November and decide whether two new casinos can open in North Jersey. The mayor said those proposed casinos would cause three more in Atlantic City to close.

Earlier this year, Gov. Chris Christie proposed a state takeover of Atlantic City in order to restructure its government and finances. A recent poll found a slim majority of state residents oppose the plan, believing the city should take care of its own problems instead.