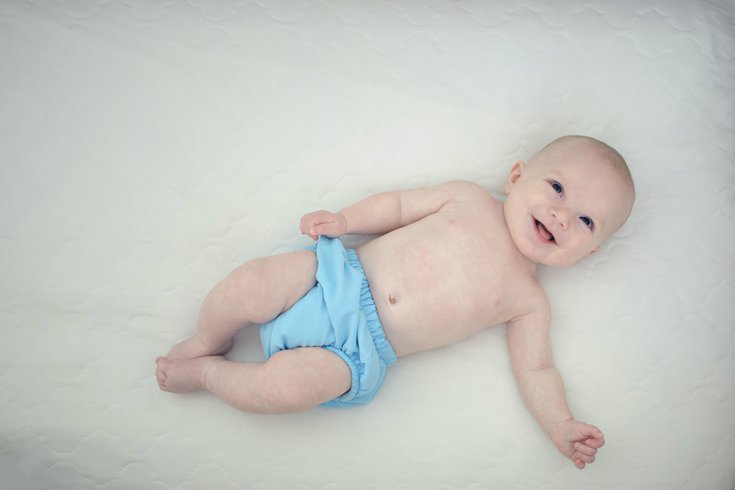 'Meconium is like a time capsule, revealing what the infant was exposed to before it was born. It contains all sorts of molecules encountered and accumulated from the mother while in the womb, and it then becomes the initial food source for the earliest gut microbes,' said Charisse Peterson of the University of British Columbia in Vancouver.

All new parents are warned about those first diaper changes right after birth. That first poop — called meconium — tends to be black or greenish and very sticky, almost tar-like.

While moms and dads may haggle over who gets to do the honor of that first and often messy diaper change, the state of the meconium usually doesn't cause too much concern.

A new study, however, suggests that analyzing the contents of this first stool, which is made up of the materials the infant ingested in utero, including mucus, amniotic fluid, bile, water and skin cells, could predict his or her risk for developing allergies, asthma or eczema.

Scientists have known that these conditions occur when harmless substances trigger an immune system response, and that gut bacteria diversity may play a role. One theory is that good gut bacteria trains the immune system to not overreact to the surrounding environment.

"Meconium is like a time capsule, revealing what the infant was exposed to before it was born. It contains all sorts of molecules encountered and accumulated from the mother while in the womb, and it then becomes the initial food source for the earliest gut microbes," Charisse Peterson, of the University of British Columbia in Vancouver, said.

In this latest research, Peterson and her colleagues analyzed the meconium of 100 babies involved in a larger Canadian child development study.

The researchers then used the data to predict using a machine-learning algorithm which infants would develop allergies by their first birthday. When the babies were a year old, the researchers then conducted skin tests on each of them to measure the reactivity of their immune systems. The predictions were 76% accurate.

Overall, 25% of the group who had more diverse chemicals in their meconium had a 50% less chance of developing an overreactive immune system compared to those babies with less diverse meconium. The team also found a similar connection between diverse gut bacteria in the meconium and later immune reactivity.

"Our analysis revealed that newborns who developed allergic sensitization by one year of age had significantly less 'rich' meconium at birth, compared to those who didn’t develop allergic sensitization," the study’s senior co-author, Brett Finlay, a professor at the Michael Smith Laboratories and departments of biochemistry and molecular biology, and microbiology and immunology at the University of British Columbia, said in a statement.

Children with allergies are at high risk of developing asthma, added senior study co-author Stuart Turvey, a professor in the University of British Columbia's department of pediatrics. This new algorithm, he says, can help identify at-risk infants who could benefit from early intervention.

Want to reduce your baby's risk of developing allergies, Harvard pediatrician Claire McCarthy says feed your baby peanut products and eggs instead of waiting to introduce them later — unless there is a suspected allergy. Exclusively breast feeding, avoiding unnecessary antibiotics and making sure the child gets outside more at an early age can also help.

The study was published in Cell Reports Medicine.