Although 34th in life expectancy and 13th in happiness (behind Austria), the United States ranks first in the world in the categories of 1) dying from unintentional poisoning and 2) putting cheese where it had never been before.

Whether these stats are related is up for debate.

But the fact remains, America is the global leader in cheese archeology and it’s not even close. Where most countries would look at a food item and say “Why add cheese?” we see that same item and say “Why not?” And where some might decide there’s enough cheese already, we say, “Let’s do this.”

As I mentioned in a previous column , Pizza Hut’s 1995 release of a “stuffed crust pizza” was a watershed moment for junk food. It was a big deal with a big ad campaign, including one featuring our future el presidente. I remember going to a Pizza Hut and trying the pizza for myself when it was released. The big gimmick was that it was supposedly so good, you could eat it backward, which I did and thought it was the same as when I ate it forward: the cheese in the crust tasted weird. I never tried stuffed crust again.

This year, Pizza Hut re-released its Bacon Stuffed Crust Pizza, an experiment they’d first embarked on two years ago. Although embedding applewood-smoked bacon into pizza crust might have seemed like an especially bold move back then, it has since been overshadowed by the sheer bravado of their hot dog-filled crust breakthrough of 2015.

But is the Bacon Stuffed Crust Pizza good?

It took two days to find out. 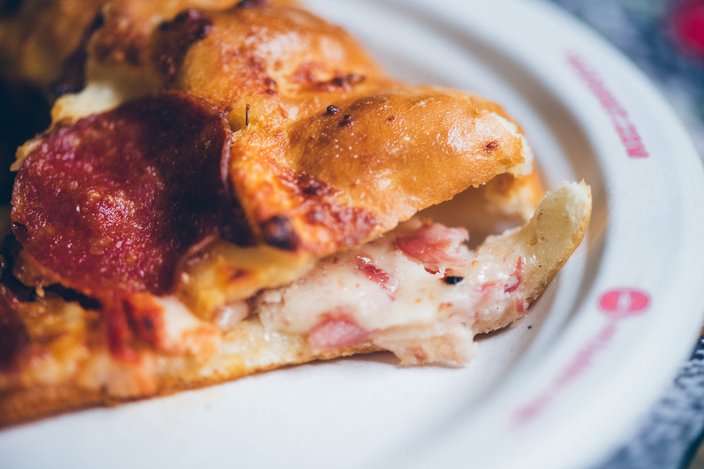 My first attempt at testing the pizza was Thursday night. I placed my order on Pizza Hut’s website and shortly thereafter received an email informing me that my delivery would arrive at approximately 10:06. At 10:36, a full hour after placing my order, I called the store. Even though they had technically closed at 10, I figured someone would be there to give me a status update.

I was very wrong. The only voice on the other end was imploring me to stay on the line, pausing only for advertisements promoting the Bacon Stuffed Crust Pizza. Cruel. Foolishly, I waited another hour, fantasizing that somewhere out there was a delivery person working hard to make his or her appointed rounds, despite the late hour. I passed the time by reading online reviews of this location, which were all negative. Finally, I gave up and walked to Wawa.

I later found out I wasn’t charged for the no-show pizza, so that’s nice.

Normally, I would just give up, never order from Pizza Hut again, and move on.

But I have a job to do. So I tried again the next night, this time from a different location, and the pizza arrived. By the end, I wished it hadn’t.

So I tried again the next night, this time from a different location, and the pizza arrived. By the end, I wished it hadn’t.

The actual pizza portion of the pizza was decent, with its sweet sauce and great amount of cheese. I still think Pizza Hut has the best pie out of the big chains, and a recent lackluster Domino’s visit affirmed this.

The alleged star of the pizza, of course, is the bacon and cheese-filled crust — and it was without a doubt the pie’s weakest link. Outside, the crust was super-dry as compared to Pizza Hut’s usually buttery crispness. Inside, I found a blend of three different cheeses, none of which were melted all the way. The scattered sprinkling of bacon bits did give it a somewhat smoky flavoring, but overall, it tasted like a bite of uncooked Hot Pocket filling.

After my long quest to eat this pizza, I felt absolutely terrible. I’ve never been kicked in the gut by a mule, but I imagine it was similar to the after-effects of eating this. Full disclosure: I also ate another of the restaurant’s items for an upcoming Bad For You, but nevertheless, I can’t imagine anyone eating a Bacon Stuffed Crust Pizza and then thinking, “Yep, I stand by that decision.”

Verdict: No, thank you. Order a regular Pizza Hut pizza instead. It might even show up. 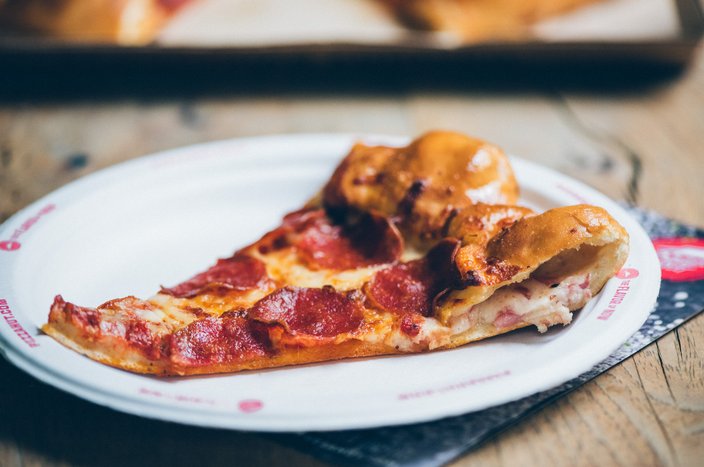