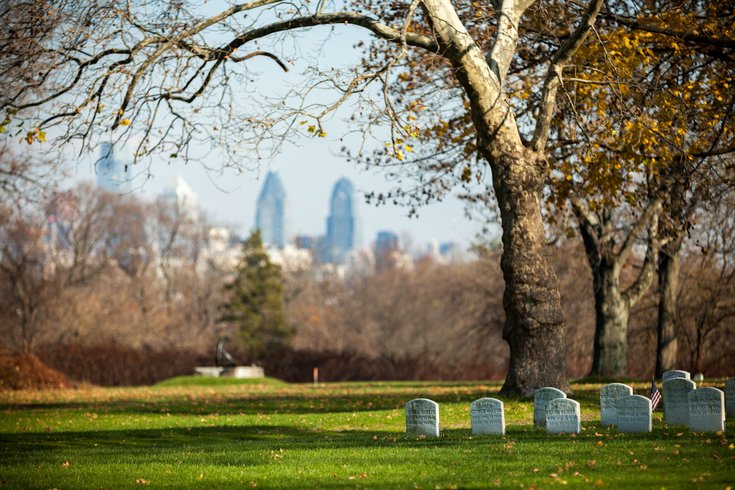 The Philadelphia skyline can be seen in the distance from a back corner of Mount Moriah Cemetery, where the graves of many fallen military personnel rest.

The Schuylkill River Trail (SRT) was recently named USA Today’s Best Urban Trail. But on the west side of the river, a less famous section of the trail connects other great green spaces in Southwest Philadelphia, like Bartram's Garden and Mount Moriah.

Bartram’s Garden, on the western banks of the Schuylkill is the oldest botanic garden in North America. It also serves as a hub in this developing section of the SRT, part of the region’s growing Circuit Trails network. (This map from the Bicycle Coalition of Greater Philadelphia will steer you there.) 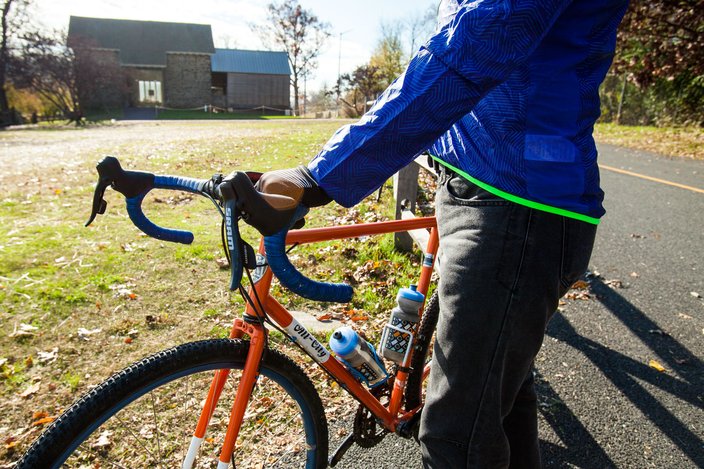 From the time you set foot on the trail, you’ll be on the East Coast Greenway, a huge project which is building a traffic-free connection from Maine to the Florida Keys. For now, you can use Philadelphia’s latest piece of Greenway to connect to Cobbs Creek and one of Philadelphia’s oldest garden cemeteries, Mount Moriah.

Leaving Bartram’s Garden, follow this route and the bike lanes to 58th Street. Then, you’ll get on a paved sidepath. If it feels strange to you to be riding on what seems to be a sidewalk, that’s good, as in most cases it’s illegal in Philadelphia if you are over 12 years old. In this case, the sidewalk was replaced with a multiuse trail, meant to be used by walkers and bikers. 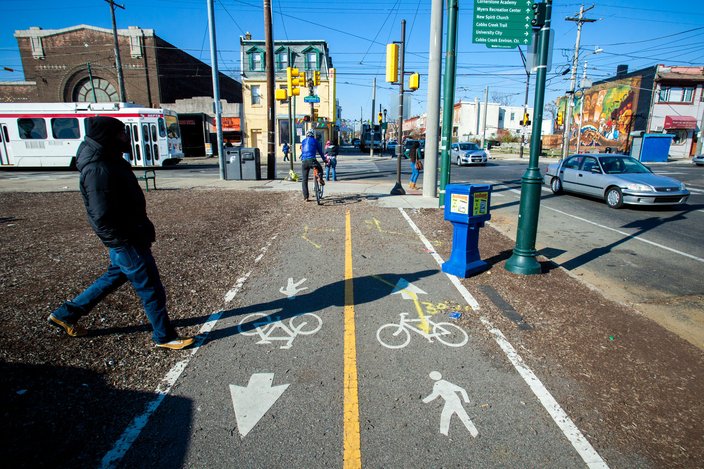 The 58th Street Greenway, which opened in June of 2013, will take you past ballfields, through the Woodlands Avenue commercial district (where if you’re lucky, a food truck will be waiting), and to the Myers Recreation Center. On Chester Avenue, the path turns to the left.

At 59th Street, you’ll be biking on the road for a few blocks. Follow the green sharrows. For drivers, they’re a reminder that bicyclists are allowed to take the full lane. In this case, they also happen to point to more green space. 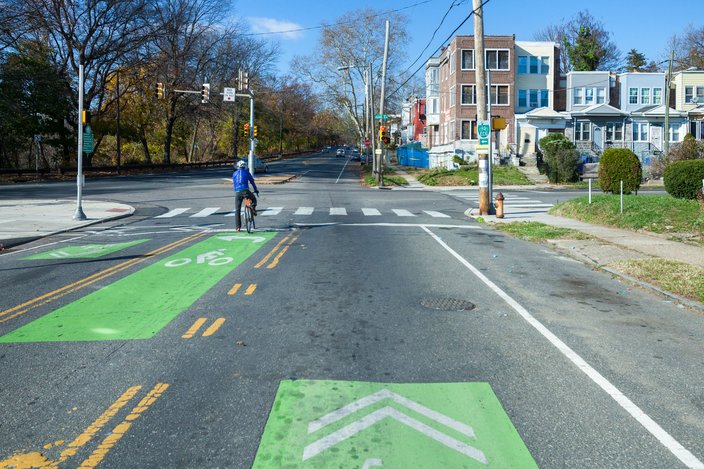 Portions of the route that are not in a bike lane are on roads with "sharrows", indicating that the roads are shared by both bicycles and cars. (Thom Carroll/PhillyVoice)

After biking a few blocks uphill to Warrington and coasting down to Florence, you’ll be at the Cobbs Creek Parkway. You can use Philly’s first bike-only left turn lane to wait for the signal to safely cross the parkway. On the other side, you’ll be on the Cobbs Creek Trail. Turning right would take you north to Market Street.

You’ll turn left and ride the paved trail set off from the busy street. In less than a half mile, you’ll see Mount Moriah Cemetery to your right. 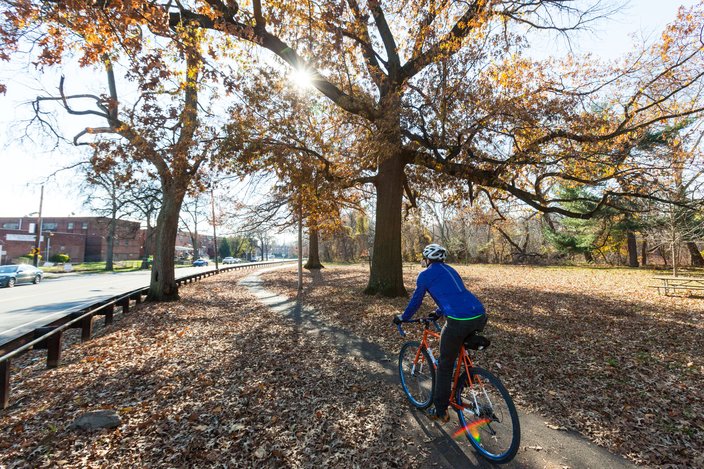 The Cobbs Creek trail, which runs next to the Cobbs Creek Parkway is the final segment of the route before the entrance to Mount Moriah Cemetery, and an easy 1/2 mile ride. (Thom Carroll/PhillyVoice)

Like its slightly older and better-known cousin, Laurel Hill Cemetery, Mount Moriah is one of America’s early garden or “rural” cemeteries. Unlike Laurel Hill, Mount Moriah had suffered from years of neglect before coming under the care of an active friends group.

Paulette Rhone, President of the Board of Friends of Mount Moriah Cemetery, wants you to know that you are welcome to explore. “I’d love for everyone to know that cemeteries, especially large rural cemeteries, are for the living, not just for the dead. They are for the living, first of all to pay respects to those who are buried there and also to enjoy it as a living green space … especially in urban areas where there’s a shortage of green space.” 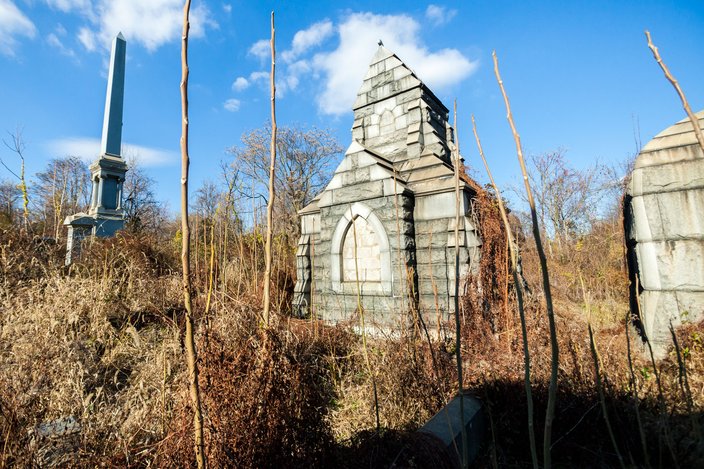 While much of Mount Moriah Cemetery is maintained, large portions of it are overgrown, resembling a time once forgotten. (Thom Carroll/PhillyVoice)

Wandering through the paved, gravel, and grassy paths of Mount Moriah, you’ll see the evidence of years of neglect as well as encouraging signs that the friends group is making progress. After climbing up from the Cobbs Creek Trail to the top of the hill and taking the paths to the right, you’ll see stunning views of the city from the military burial area. Among the graves maintained by the Department of Veterans Affairs are headstones of soldiers who died in the Civil War.

Carefully cross the busy Cobbs Creek Parkway to see the other side of the cemetery, which sits in the Kingsessing neighborhood. Paulette Rhone would be happy that you chose to “embrace cemeteries instead of shunning them” while exploring Philadelphia. 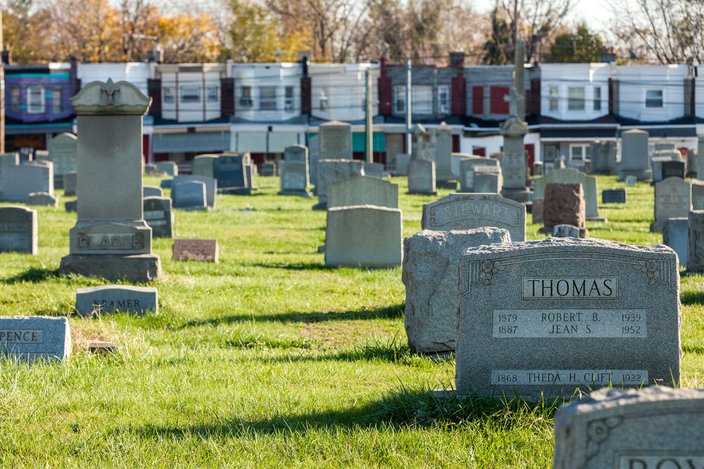