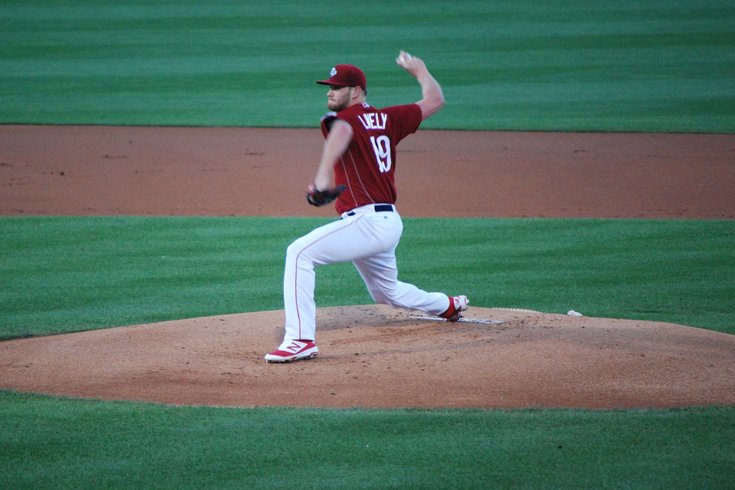 Ben Lively entered Game 1 of the International League semifinals with a 3.06 ERA in 19 starts at Triple-A Lehigh Valley. He had allowed just four base runners (three hits, one walk) in his last three starts entering Wednesday night.

ALLENTOWN – Dave Brundage could have went with the only starting pitcher who has spent the entire season in his rotation and one with big league experience, too, in right-hander David Buchanan.

You couldn’t have blamed the IronPigs manager if he had gone with right-hander Phil Klein, either. All Klein did this week was earn both Minor League Baseball Pitcher and International League Player of the Month honors.

Instead, Brundage went with another right-hander, Ben Lively, for Game 1 of the International League’s Governor Cup Playoffs. After the ‘Pigs took pregame batting practice, Brundage was asked if he liked how his rotation was aligned against the North Division champion Scranton-Wilkes Barre Railriders.

“I like it,” Brundage said with a knowing grin, “because I’m the one who lined it up.”

And Lively was a fine choice, too. The 24-year-old prospect acquired for Marlon Byrd had been churning out one quality start after another in the last month.

Lively was 6-1 with a 1.66 ERA in his last seven regular-season starts, with 40 strikeouts and seven walks. He allowed just four base runners in his most recent three starts. He didn’t allow a hit in his last start of the regular season, a six-inning outing on Friday at Rochester.

“I really like the fact that we have Lively going tonight,” Brundage said. “Well deserved, well earned. It’s a big ballgame. I mean they’re all big ballgames, but you want to get off on the right foot and he’s had success against this team. Mentally and physically he’s in a good frame of mind.

“He’s throwing the ball as well as he’s had in his career. I’ve heard the comment numerous times about, ‘That’s as good as I’ve seen Lively,’ from people from Philadelphia coming down to watch him.”

Ben Lively delivered on Wednesday night at Coca-Cola Park. The ‘Pigs offense looked more like their parent club, though.

Mason Williams ruined Lively’s shutout bid with a two-run home run with two outs in the eighth inning while Scranton held the home team to four hits in the IronPigs' 2-0 defeat. The Pigs host the second game of the best-of-five semifinal series on Thursday before the series moves to Scranton this weekend.

"You’d hate for it to come down (to that) but it’s playoff baseball and they had a pretty good left-hander on the mound who did well as well," Brundage said, referring to Scranton left-hander Jordan Montgomery, who entered the night 5-1 with a 0.97 ERA in six starts at Triple-A. "There’s a reason they were No.1 (in the division) and we were No.2. Outstanding job, I just wish it wouldn’t have come down to a two-run homer. (Lively) pitched his ass off."

Lively was deserving of a much better fate.

Facing a Yankees Triple-A lineup with new top prospect Clint Frazier hitting second and a trio of former big leaguers spread out elsewhere throughout the lineup, Lively retired 20 of the first 24 batters he faced and one of those four that reached probably shouldn’t have been credited with a hit, but, instead, for having reached on an error.

When Lively struck out former St. Louis Cardinals postseason hero Pete Kozma for the second out of the eighth inning, he was four outs away from a shutout. He had eight strikeouts and zero walks. He wasn’t overpowering, sitting in the 91-92 MPH range, but he mixed his pitches masterfully and put his team in position to win, just as he had for most of his time this season in Triple-A (11-5, 3.06 ERA in 19 starts).

"I felt good, I just kept rolling with everything," Lively said. "I was getting ahead and the putting guys away."

Despite Lively's effort, the ‘Pigs are two more losses away from going home for 2016 because their offense failed them.

Nick Williams, who many believe (present company included) would be the first prospect promoted to the big leagues back when the season began, continued his late-season swoon at the plate by going 0-for-4 with three strikeouts.

"I think it looks like he’s in between," Brundage said. "The first at-bat he hit the ball pretty good, got the center fielder turned around."

To be fair, Williams did hit part in the field with two highlight-reel worthy catches to help Lively, including one that saved a run to end the fifth inning.

"He had a couple of nice plays. ... But we also need his bat," Brundage said. "We need some good at-bats. But at the same time, we’re facing a pretty good pitcher. Sometimes you have to tip your cap to the other side as well."

Montgomery (seven shutout innings) was out of the game when the Pigs batted in the eighth, trailing for the first time Wednesday night. Two of the Pigs best hitters came to the plate with a chance to tie the game with one swing against left-hander Dietrich Enns.

Instead, with a runner on first and two outs, Williams struck out looking. Phillies top prospect J.P. Crawford, who has also struggled at the plate since July, preceded Williams by also striking out looking.

Three of the four hits the Pigs did collect on Wednesday came from two of the three hitters in the bottom third of their lineup: Brock Stassi (2-for-3) and Jesmuel Valentin (1-for-2 with a walk).

The offense, which included the aforementioned top two prospects, was difficult to watch in Allentown. But at least the Phils farm system is producing yet another useful right-hander in Lively.

While his absence on the current 40-man roster might not make him a favorite to get to Philadelphia this month (Buchanan and Klein are also candidates), Lively certainly didn't hurt his chances of becoming the latest Pigs' pitching prospect (following the likes of Zach Eflin and Jake Thompson) to earn a first-time major league promotion in 2016.