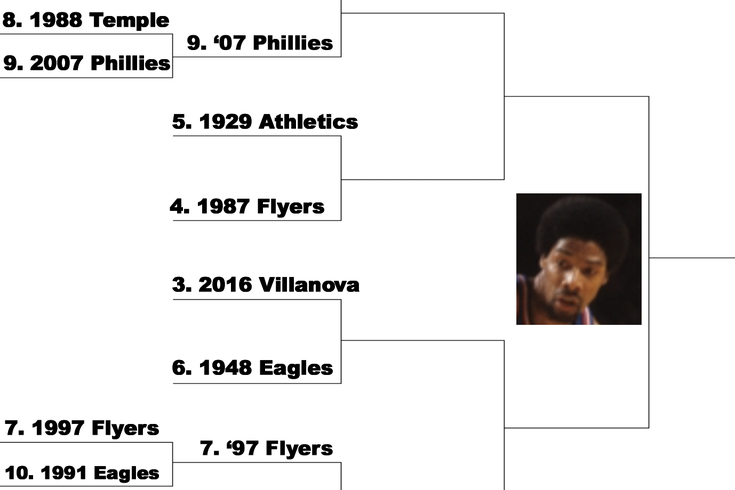 There are eight teams left in the Dr. J Region of our Best Team Ever bracket.

It's impossible to compare teams across eras.

The rules change. The quality of the athletes change due to technology, science, training techniques and so on.

The styles change. The 3-point line has only been around since 1979. The spread offense didn't exist a few decades ago.

But who cares. Let's do it anyway.

In the spirit of March Madness, we compiled a 40-team bracket. Managing sports editor Evan Macy, deputy sports editor Shamus Clancy and staff writer Nick Tricome ranked the 40 teams you see in the bracket below and we took the average of the three seedings to create the seedings we will use for this exercise.

coming this week on @thephillyvoice: pic.twitter.com/unti3yYnG7

How should you vote? Is it for your favorite of the two teams matched up? Which you think is better? Which you think would win a head to head match (if it were possible)? That's entirely up to you.

Today, we'll break down the matchups in our Dr. J Regional in the Round of 32. Below we'll give you some facts on each team, and some thoughts on what we think of them. And then it's up to you to help us crown the best team in Philadelphia sports history.

Shamus says: This Phillies team was the biggest offensive juggernaut during the franchise's Golden Age (2007-2011). They lead the National League in runs scored, walks, on-base percentage and slugging percentage. They had five dudes hit at least 22 homers. Rollins was the first NL player in 50 years to have at least 20 doubles, triples, home runs and steals in a season during his MVP campaign. Even more amazing, Utley may have won the award himself if not for a late season injury. The Phillies had last made the playoffs in 1993. I was born in 1994. The was the first Phillies playoff squad of my lifetime and watching them slug the crap out of the ball is one of my fondest teenage memories.

Evan says: I wrote about this team during the early stages of the pandemic when we named them the second best team in the city's history. This squad had four All-Stars, beat 10 hall of famers in the playoffs, contended with 12 teams winning 40 or more games and famously were one game away from going "fo fo fo." Here's what I wrote in 2020:

The '83 Sixers had to contend with Larry Bird's Celtics and Sidney Moncrief's Bucks in the East and had a much better and more highly competitive NBA all around when they were able to win the title. They lost just once in the postseason and swept Magic Johnson and Kareem Abdul-Jabbar's Lakers in the Finals. If you look at the NBA champions from 1980 until 1988, it is the Lakers five times, the Celtics three times and the Sixers smushed in the middle. They were the one team in the prime of the Lakers-Celtics rivalry that could stand up and take a championship away from Magic and Bird. [Philly Rank]

Shamus says: The Athletics’ 104 wins are more than any Phillies team ever and they won the World Series in just five games over the Cubs. The A’s had five Hall of Famers on the roster, including Jimmie Foxx, one of the three greatest right-handed hitters of all time. They finished a whopping 18 games ahead of an all-time Yankees roster to win the American League pennant. This was dominance.

This team didn't walk away with the Cup, but it pushed one of hockey's greatest dynasties to the brink. They went the distance with the Gretzky-era Oilers, who alongside the Great One, had Mark Messier, Jari Kurri, Glenn Anderson, and Paul Coffey all racking up points, with a hall-of-fame goaltender in Grant Fuhr backing them up. These Flyers had legit goal scorers in Tim Kerr and Brian Propp, a shutdown defensive pairing with Mark Howe and Brad McCrimmon, and Ron Hextall backstopping them, who at the time, Gretzky said was the greatest goalie he ever faced.

They face any other team, and the Flyers probably come out on top with their third Cup in franchise history.

Nick says: An absolutely dominant team that saw six of its players go on to the NBA (Hart, Brunson, Jenkins, Ryan Arcidiacono, Donte DiVincenzo, and Daniel Ochefu). They stormed through the regular season and on through the tournament, capping it off with a battle against North Carolina in the National Championship that went down to the final buzzer. Cue one of college basketball's greatest moments. (Here's the link, we know you were gonna go watch it again)

Shamus says: The first ever Eagles championship squad! After losing the title game to the Chicago Cardinals the year prior, the Birds came roaring back and completed a 9-2-1 season while beating that Cardinals team in the championship 7-0. The ’48 Birds were top two in both yards and points for and then yards and points given up. Hall of Famers Steve Van Buren was a beast with 1,000-plus yards from scrimmage and 10 TDs in 11 games.

Nick says: This was the peak of Flyers hockey in the '90s and the Legion of Doom's best, last and only shot. They stormed right through the Eastern Conference, racking up 103 points during the regular season, then rolled right through to the Stanley Cup Final finishing each series in five games.

Then they ran into a buzzsaw in Detroit... four-game sweep... it wasn't close.

Nick says: The 73-74 Flyers turned the NHL on its head and won the Stanley Cup. The 74-75 Flyers proved it wasn't a fluke. The Broad Street Bullies came back bigger and better, putting up a repeat performance, this time with Reggie Leach coming in and scoring a team-leading 45 goals and Bernie Parent becoming the undisputed Vezina winner as the league's best goalie.