Bicycle built in Philly to make historic trip across Antarctica 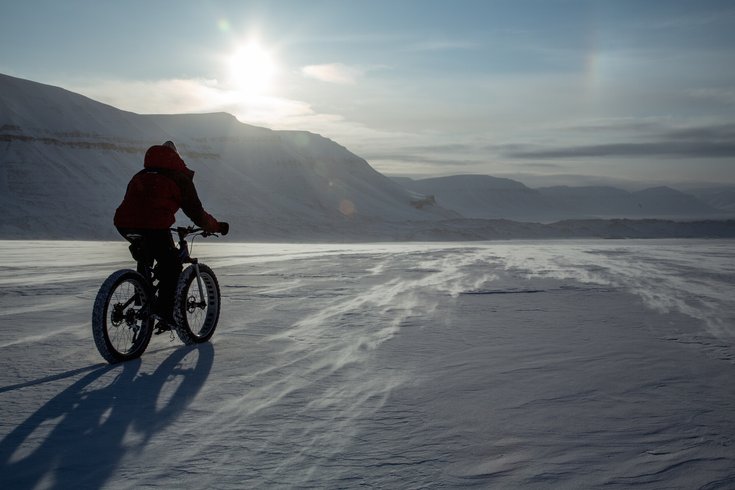 Kate Leeming performs a trial run of a Philadelphia-created bicycle in Svalbard, Norway. If a fundraising campaign proves successful, she will attempt to become the first person to ever traverse Antarctica on a bicycle.

Kate Leeming has ridden a bicycle all around Europe. And along a Trans-Siberian path across Russia. And across a zigzag course through Africa. And a landmark voyage through her native Australia. And through the bitter-cold conditions of Greenland and Scandinavia in preparation for her next superhuman trek.

In many cases, the “adventure cyclist” became the first woman to accomplish those feats in quests that doubled as “personal exploration” and a means to draw attention to issues that ail those in unseen parts of the world.

Now – with the help of a bicycle developed and built in a converted firehouse along North Second Street in Northern Liberties – the tennis pro, author and groundbreaking adventurer has her sights set on accomplishing something that’s never before been done by a human.

Leeming – an accomplished tennis champ from Melbourne, Australia – hopes to soon hop aboard a Christini All-Wheel-Drive “Fatbike” and traverse the continent of Antarctica by way of the South Pole. While the trip to from the continent’s edge to the South Pole has been done, no one has ever ventured further, as Leeming plans to do.

Along with Steve Christini – the locally-based manufacturer of that niche bicycle – she’s launched a Kickstarter campaign to raise funds for that arduous trip.

Christini’s path to this point started with a senior project at Villanova University “that evolved into a prototype company and production for mountain bikes that turned into a motorcycle line.”

In recent years, the company has returned to the mountain bike realm with the introduction of his All-Wheel-Drive Fatbike, the mechanics of which he breaks down in a video embedded on the Kickstarter for Leeming’s trip.

“You can get overwhelmed by the conditions. If you make a concerted effort to look at the beauty of the surroundings, it helps you get through." – Kate Leeming

That shift in production stemmed from Leeming’s request, made about three years ago, for a fatbike capable of helping her make history. They’ve since been created and Leeming has tried them out on trial runs across the tundra.

The $40,000 Kickstarter effort is designed to not only help Leeming afford a rather expensive voyage, but get more of those $4,995 bicycles – which enable riders to “drive the front wheel and the rear wheel” – made.

“She inspired us to relaunch the bike, and it’s currently only available through the Kickstarter effort,” Christini said last week at his company’s showroom on Second Street between Spring Garden Street and Fairmount Avenue. “We’re not going to make a whole lot of money off of this. The hope is that this will find somebody who wants to buy a bike to be a part of it, or investors who want to back the expedition.”

Leeming’s bicycling resume includes a 8,326-mile trip across Russia to aid the children of Chernobyl and a 13,700-mile voyage from Senegal to Somalia in an effort to “highlight the development needs of war-torn and poverty-stricken nations."

The nearly 1,200-mile voyage through Antarctica would take roughly 45 days in temperatures between 14 degrees and minus 40 degrees Fahrenheit. To prepare, she’s already done trial runs in Greenland and Norway.

During a Skype interview from Australia with PhillyVoice this weekend, Leeming explained how she got into this brand of cycling, her ties to Philadelphia and what she hopes to accomplish in the coming months.

It started in the late 1980s when she started cycling as a way to see Europe.

“It was my personal exploration,” she explained. “I loved travel and to see the world by bicycle. It increases the connection to the people and the land. It gives you such a brilliant sense of place, of how the world comes together. I can remember every photo I’d ever taken on the bike. It’s a stronger, deeper connection.”

From there came the Russia trip (of which she was the first woman to complete) and a foray to become a championship court-tennis pro. But a bad knee injury slowed those efforts to the point of exploring Australia by bicycle “to see how it matched up to the whole world.”

“I’m good at ultra-long distances, gauging what my body can do. Often, my mind gets me through (the challenging portions); the mind pushes the body,” she said. “It comes from the heart. It’s not just about me. It’s great that I can go out and do these things.”

Leeming was born and raised in Australia, where tales of arctic explorers captivate society moreso than in the United States. It’s somewhat because of that that she trained her sights south from that island continent to the land of the South Pole.

“We’re not very good at cold here, so North America was the best place to start researching,” she said of the desire to find a bicycle that would make such a trip possible.

Custom-bicycle manufacturer Davis Carver in Maine steered her in Christini’s all wheel-drive direction. They’ve never met face to face, but Christini bought into the project despite being out of the bicycle-production game since 2005. 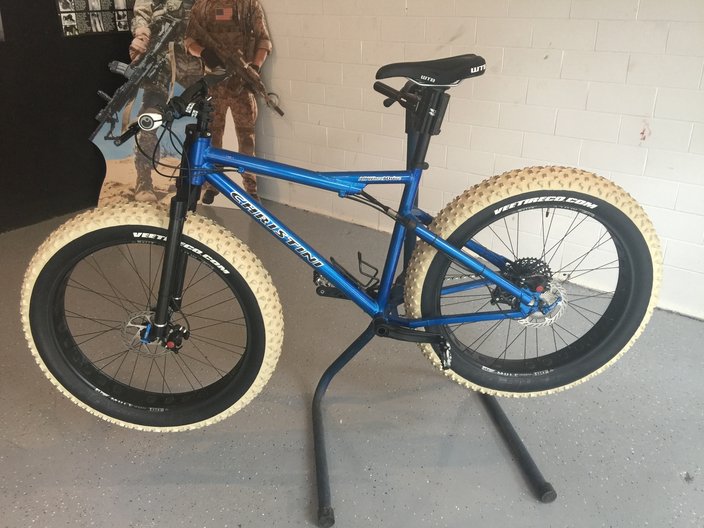 The same version of All-Wheel-Drive Fatback bicycle that Kate Leeming hopes to ride across Antarctica is on display at Steve Christini's showroom on North Second Street in Northern Liberties.

“Thank goodness he was into the idea. What amazes me is that he and I trust and respect one another implicitly despite having never met face to face,” she said of a collaboration that started roughly three years ago. “He loved the challenge, built the first one and sent it to Maine. I came through, picked it up and was off to Splitsbergen, Norway.”

There, she took it for a trial run and was impressed with how its tires grip surfaces both hard and soft, helps her stay upright and conserves energy through its cutting-edge technology.

Should she be able to raise the requisite funding – while the Kickstarter campaign has a $40,000 goal, the expedition itself tops a half-million dollars – she’ll be able to venture off in pursuit of history.

She was asked to describe what it’s like to bicycle in such prohibitive conditions, specifically if people think she’s insane for trying it in the first place.

“You have to get your mindset right in the first place. I constantly remind myself how privileged I am to get the chance to do these things,” she said. “You can get overwhelmed by the conditions. If you make a concerted effort to look at the beauty of the surroundings, it helps you get through. I learned that when faced with tough conditions. I had a chest infection and couldn’t breathe, but I never wanted to give up.”

As the mission currently stands, Lemming said a successful campaign would enable her to take a training trip to the Yukon in Alaska before setting out to become the first bicyclist to traverse Antarctica.

She said she was confident things would fall into place, though it’s still a struggle to secure the necessary funding.

“You have to understand the mission of what you’re doing. People who understand what I’m doing, why I’m doing it, don’t think I’m nuts. It’s a passion,” she said of a trip with no firm timetable yet scheduled. “When I give a presentation, I say it’s all about people making a difference. If I believe I’m making a difference with these missions, I can take the idea of people calling me mad and turn it around.”