First protected lane slated to be installed this summer

A cyclist navigates around vehicles parked in the bike lane on the 1800 block of Spruce Street.

Biking advocates urged the Philadelphia government on Tuesday to quickly install a series of protected bike lanes, saying they will enhance road safety for bicyclists, pedestrians and motorists.

Mayor Jim Kenney's administration has pledged to add 30 miles of protected bike lanes throughout the city during his tenure. Thanks to a $300,000 Transportation Alternative Program grant awarded by the Delaware Valley Regional Planning Commission, protected bike lanes soon could become a reality on several city streets.

Protected bike lanes use flexible delineator posts to physically separate bike and driving lanes. Roads also can be re-configured to place a parking lane between biking and driving lanes, adding an additional buffer.

A new two-way protected bike lane will be installed later this summer on Ryan Avenue.

The first – a two-way, protected bike lane on Ryan Avenue in Northeast Philly – will be installed later this summer. The other projects remain in dialogue with elected officials and community members, Deputy Managing Director Clarena Tolson said.

"Every location is different," said Tolson, standing alongside a bicycle lane at 15th and Spruce streets. "This is different from Northeast Philly. And if I go from here, two blocks over, it's different."

Members of the Bicycle Coalition of Greater Philadelphia, political action committee 5th Square and local bikers held a press conference with Tolson on Tuesday to increase the dialogue essential to completing these projects.

"We wanted to get that going a little bit more," bike coalition spokesman Randy LoBasso said, noting the city is seemingly wrapping up its soda tax discussions. "It's time to get on other forms of health."

The projects covered by the TAP grant include new protected bike lanes on portions of Race Street, Lindbergh Boulevard and the West Passyunk Avenue bridge spanning the Schuylkill River.

The grant also provides funding to redesign several conventional or buffered bike lanes into protected lanes. Buffered lanes include a strip of paint designed to leave more space between drivers and bikers, but do not include delineators.

The two-way protected bike lane on Ryan Avenue will be installed between Rowland and Lexington avenues. It will be located on the east side of the street, alongside Pennypack Park, Austin Meehan Middle School and Abraham Lincoln High School.

A four-foot buffer with delineator posts will separate the two bike lanes from a parking lane. Driving lanes will be located on the other side of the parking lane. 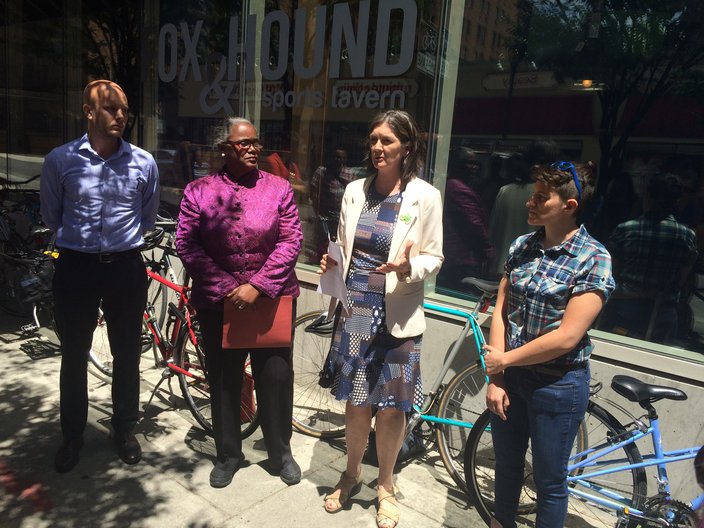 Installing one mile of protected bike lanes can be done for as little as $5,000, Curtis said.

"It's something that we could have here virtually overnight," Curtis said. "We can do a lot very quickly to address the issue. It's a very critical issue."

The hope is that protected biking lanes will help reduce traffic crashes and fatalities. Nine bicyclists died in Philadelphia last year, according to the bicycle coalition.

Philadelphia recorded 11,544 traffic crashes in 2015, its highest total in the last five years, according to PennDOT. Ninety-four people died, a slight decline from the 97 killed in 2014. Pedestrian deaths fell to 26 in 2015, but had risen the four previous years.

More than a dozen cities across the country have installed protected bike lanes, Clark said.

A New York City Department of Transportation study found that protected bike lanes improved safety for everyone. Total injuries dropped by 20 percent, although bicyclist injuries only declined by 2 percent.