The rock and roll legends will share the stage on Friday, June 16, 2023; here's how to get tickets for the special show 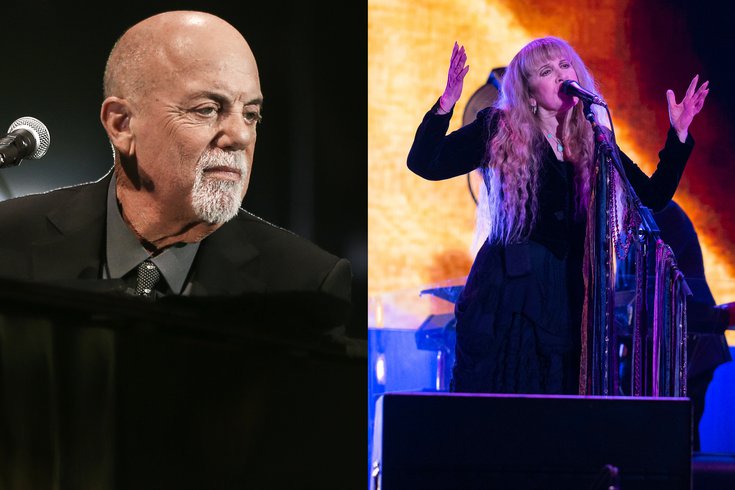 Rock and roll legends Billy Joel and Stevie Nicks will perform a one-night concert at Lincoln Financial Field on Friday, June 16, 2023. The special concert will mark the first time the two musicians have shared a stage in Philadelphia. Tickets go on sale Friday, Dec. 16.

Billy Joel and Stevie Nicks are set to perform a special, one-night-only concert at Lincoln Financial Field next summer, marking the first time the two rock legends have shared a stage in Philadelphia, Live Nation announced on Thursday.

The musicians will share the stage for "Two Icons – One Night" on Friday, June 16, 2023. Tickets for the general public go on sale beginning Friday, Dec. 16. The performance is part of a co-headlining tour from the two Rock and Roll Hall of Famers, which began as a single show in August and has since been expanded to seven cities across the country.

MORE: Jill Scott set for return to Philly in 2023 as part of anniversary tour for debut album

The music icons are expected to perform popular songs from their respective catalogs, though it remains unclear if there will be duet performances. For fans looking to hear "Uptown Girl," "Edge of Seventeen," "Piano Man" and "Rhiannon" all in the same night, there is only one place to be.

"This is a select few cities, at this point," Wilson Howard, chairman of Live Nation's southeast division, told The Tennessean in early November. "I think there may be five to seven shows. This is not something you can see in every city. It's going to be very special. Don't miss this one."

Joel, 73, and Nicks, 74, have loads of experience playing at music venues in the city. Joel performed with Elton John three times at the former Veterans Stadium, as well as six times at the Wells Fargo Center and twice at Citizens Bank Park. The singer, who will celebrate the 50th anniversary of "Piano Man" in 2023, also performed at the ball park as a soloist from 2014 through 2019.

Nicks, the only woman to be inducted into the Rock and Roll Hall of Fame twice, performed at the former JFK Stadium with Fleetwood Mac in 1978. She performed with the band at the Wells Fargo Center most recently in 2019.

The musicians are still enjoying solo touring in between the special one-night shows. Joel, who most frequently performs at Madison Square Garden, is continuing his residency into 2023, though there are no announced shows in the songwriter's hometown.

Meanwhile, Nicks just wrapped her fall 2022 tour with fellow songwriter Vanessa Carlton at the end of October. The Fleetwood Mac singer released her live album and concert film, "24 Karat Gold The Concert" and single "Show Them The Way" in 2020, her first original release in more than six years.