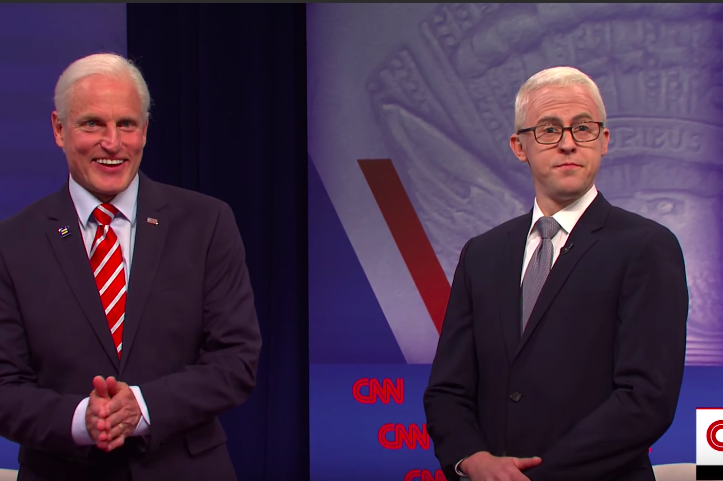 "Saturday Night Live" tackled the LGBTQ town hall on CNN this past week in the show's cold open, bringing out democratic presidential hopefuls with a snazzy flair.

Anderson Cooper (Alex Moffat) moderated the event and invited the-one-and-only Billy Porter to the stage to give a warm "Pose"-friendly introduction to the nominees.

Cory Booker (Chris Redd) graced the stage first, and he wants everyone to know that his girlfriend, Rosario Dawson, was in "Rent," so he "totally gets it."  Former HUD Secretary Julian Castro, played by Lin-Manuel Miranda, wants you to vote for him for vice president, while Elizabeth Warren (Kate McKinnon) has some seriously sick comebacks.

The last candidate to get introduced was the "Delaware Daddy" himself, Joe Biden. Woody Harrelson returned as the former Vice President to deliver creepy vibes and a long, questionable answer in regards to his previous support of the military's "Don't Ask, Don't Tell" policy. You see, he saw a gay couple once in Dover with his dad at some point in the 20th century, so it's cool. He then proceeded to ask Cooper if he ever kissed a vice president before kissing him on the lips. So, yeah, that happened.

The strong opening folded nicely into host David Harbour's first foray into sketch comedy. While there were many gold moments this episode, the highlight of the night was a trailer for "Grouch," an Oscar the Grouch origin story. The "Joker" spoof stars Harbour as the Sesame Street character as he comes to terms with his grouchiness.  He ponders,"If everybody calls you trash, and everyone treats you like trash, why don't you become trash?"