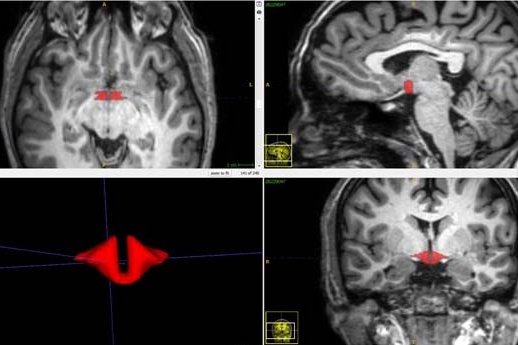 An MRI depicts the hypothalamus – the area of the brain that regulates mood, appetite and sex drive – in red.

Women who take birth control pills may have a smaller hypothalamus – the region of the brain that regulates mood, sex drive and appetite, among other bodily functions, new research suggests.

A smaller hypothalamic volume was linked to greater anger and depressive symptoms, according to preliminary findings presented Wednesday at the Radiological Society of North America's annual meeting in Chicago. Researchers found no correlation between hypothalamic volume and cognitive performance.

The hypothalamus sits at the base of the brain, above the pituitary gland. Among the other bodily functions it helps regulate: Body temperature, sleep cycles and heart rate. It also produces hormones.

Yet, the impact of sex hormones on the hypothalamus – including those found in birth control pills – had not previously been reported, researchers said.

"We found a dramatic difference in the size of the brain structures between women who were taking oral contraceptives and those who were not," said Dr. Michael L. Lipton, a radiology professor at Albert Einstein College of Medicine in New York.

Birth control pills are among the most popular forms of contraception. Among the 47 million U.S. women who currently use contraceptives, about 13% use birth control pills, according to a report by the U.S. Centers for Disease Control and Prevention.

Researchers found that women who take oral contraceptives had a significantly smaller hypothalamus volume than those who do not take birth control pills.

"This initial study shows a strong association and should motivate further investigation into the effects of oral contraceptives on brain structure and their potential impact on brain function," Lipton said.

The study enrolled 50 women, including 21 who were taking birth control pills. Each of the women underwent a brain MRI. Researchers then used a validated approach to measure their hypothalamic volumes.

The study's findings were presented on the same day that other researchers announced they had developed a monthly birth control pill that works in animals. A starfish-shaped gadget included in the capsule slowly releases the drug over the course of the month, preventing pregnancy.

"It has a lot of potential," Dr. Beatrice Chen, a family planning specialist at the University of Pittsburgh, who was not involved in the study, told the Associated Press. "Birth control is not one-size-fits-all."