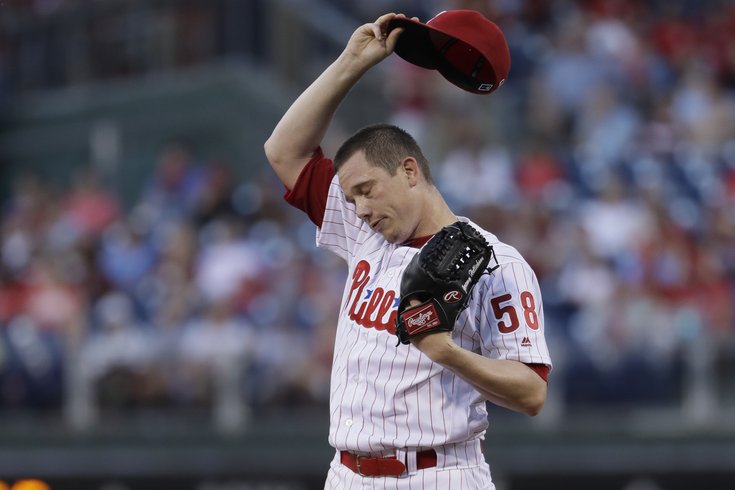 Philadelphia Phillies' Jeremy Hellickson during the Wednesday's 7-2 loss to Toronto.

If you were Pete Mackanin and watching from the perspective of the home dugout at Citizens Bank Park, the best you could have hoped for down two in the eighth inning was the possibility of seeing your set-up man get his groove back.

Instead, Hector Neris served up a booming home from to reigning American League MVP Josh Donaldson on his fifth pitch of the night, a 95-MPH fastball over the heart of the plate, and then walked and hit each of the next two batters, and eventually watched both of them circle the bases, too.

Well, how about the newly-minted starting first baseman, who was five nights removed from officially taking over the job before celebrating it with a pair of home runs in Washington. Maybe Tommy Joseph could take a few more encouraging steps forward and give the crowd of 24,753 something to cheer about other than hearing the Bare Naked Ladies on Canadian Heritage Night in South Philly?

Maybe Jeremy Hellickson, the veteran acquired to eat innings early and serve as trade bait in July. Could he begin a monthlong run of success that’d help fatten that possible return before the Aug. 1 trade deadline?

Growing Pains isn’t just a cheesy late 80s sitcom with Alan Thicke and Pavel Bure’s future brother-in-law. It might as well be the titled emblazoned on the cover of the 2016 Phillies Video Yearbook (do they still publish those?). Although it might not sell that well with that title.

The young-and-up coming Phillies played some pretty good baseball in the first two months of the season. But then a run of games with the Nationals, Cubs, and Blue Jays greeted them and the Phillies look a bit more like the young and the restless.

Hellickson gave up three runs after walking the first two batters in the fourth inning, Joseph and Neris continued their mini-slumps, and Toronto mashers Donaldson and Edwin Encarnacion both homered for the second straight day as the Phils suffered a 7-2 defeat to the defending American League East champions.

"We were in the game until that eighth inning," Mackanin said. "We had our chances. We were only two runs down. The negatives? Three walks and a hit batsmen. They all scored. That was our demise from the pitching aspect."

The Phillies (30-36) have lost six of their last seven games and are a season-worst six games under .500. They have lost 15 of 19 games since the aforementioned run wth the Cubs, Nats, and Jays began on Memorial Day weekend.

Was there something – anything – positive to pluck from Wednesday’s one-sided game between a veteran team that never stops hitting and mostly unproven team waiting for the bats blossoming on the farm? Sure.

Cody Asche, activated off the disabled list two weeks ago, had his best game of 2016. Asche went 3-for-4 with two doubles and a home run that reached the second deck of the right field bleachers in the Phillies defeat.

"Hopefully Cody can keep it going," Mackanin said of Asche's first career game with three extra-base hits. "That’s the best I’ve seen him in a while. Really pleased to see that."
But as for the rest of the game?
• Hector Neris has given up eight earned runs in his last eight games (since May 30) after allowing four earned runs in his first 26 games. So what's changed?
"What I see, the difference I see, when he was automatic, throwing the split for strikes at will," Mackanin said. "Now he doesn’t seem to have command of the split. He’s getting behind.  He’s just not repeating that pitch for strikes and that's what’s getting him into trouble."
Mackanin also mentioned the possibility of his arm angle being off. Neris said he's have to consult the video. Until then, he's trying to maintain the confidence that, along with the splitter, helped him become one of baseball's best eighth-inning relievers in the season's first two months.
"I’m good," Neris said. "Everything is fine. Everybody has bad times, you know? The point is to get back. Stay focused, do your job, and come back the next day. Because this day is past. Tomorrow is a new day."
• The Phillies would really rather not have Jeremy Hellickson hopping onto the Aaron Harang train to nowheresville in the month leading up to the trade deadline. (Harang had a 2.02 ERA in 11 starts in the first two months of 2015 and then had an 8.31 ERA in six starts between June and the All-Star break).
There's still time to get right, with more than six weeks until the deadline, but Hellickson's first three starts in June are troubling: he's 0-2 with a 7.41 ERA. More troubling stats: Hellickson has allowed five home runs in 17 innings his last three starts and his strike-out-walk totals are a very underwhelming 10-to-9, too.
"I just haven’t been making good pitches," Hellickson said. "I think that’s what it comes down to, not making good pitches when I need to. Not stranding enough guys, leaving too many balls up over the plate."
• Maikel Franco will be back in the starting lineup on Thursday, Mackanin said following Wednesday night's loss. Franco's status was uncertain prior to the game, when the second-year third baseman was held out of the starting lineup for the third straight day with a right knee injury.
But Franco pinch hit (and struck out) in the ninth inning and took ground balls in the infield in batting practice prior to the game.
"He feels a lot better," Mackanin said. "We'll get him back in there tomorrow."
Franco could help an offense in need of regular production. Before being held out of the lineup the last three games, Franco was hitting .279 with an .804 OPS and four home runs in 19 games since May 22.