We tried it: TITLE Boxing Club offers authentic workout in a great space

It's the first gym to open in Philly's boutique boxing boom 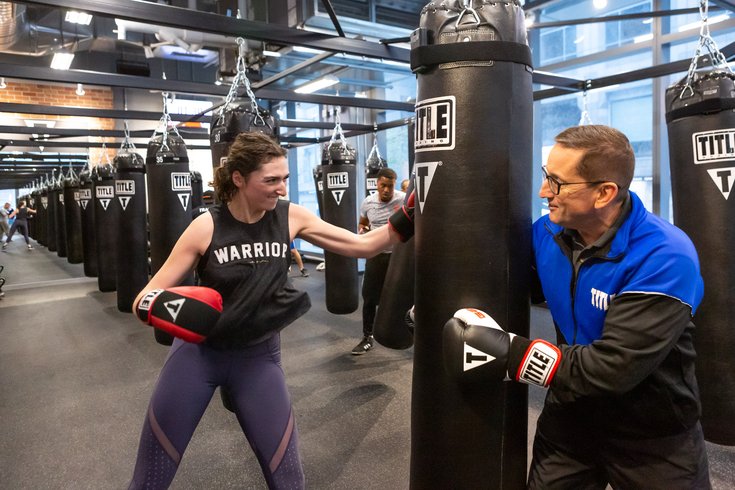 Whether you know it or not, the boxing fitness boom has arrived in Philadelphia. Three boutique clubs — all with strong reputations — will open within blocks of one another in Rittenhouse.

The first club to open, TITLE Boxing Club, hails from the Midwest, though franchises are popping up from coast to coast. TITLE's floor-to-ceiling window-lined gym officially opened here last month at 21st and Market streets. 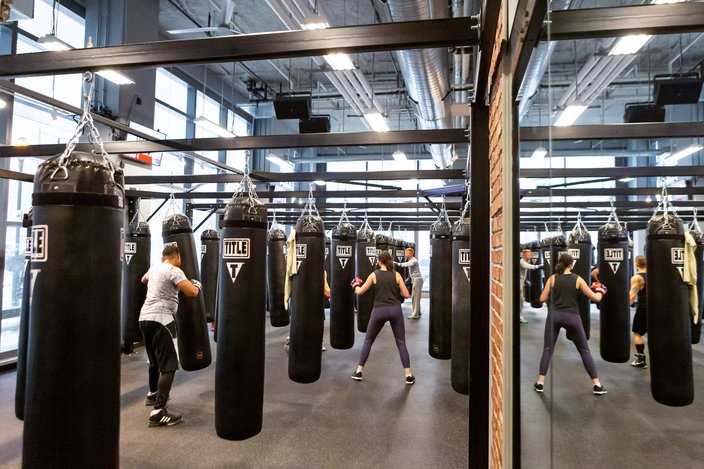 The Center City location has 44 heavy bags each outfitted with an accelerometer to measure force and velocity.

Jim Walsh, the owner of TITLE’s Center City franchise, compares the influx of boxing gyms here in Philadelphia to the proliferation of pho restaurants. Twenty years ago, it was rare to get pho but now, everyone is going for the Vietnamese soup, he explained.

RELATED READ: Put 'em up: The boxing gym boom has landed in Philadelphia

“You used to go to South Philadelphia to go to a boxing gym or you would go to North Philadelphia. Well, we’ve become like pho; they’re now going to be popping up all over. We all love pho.” 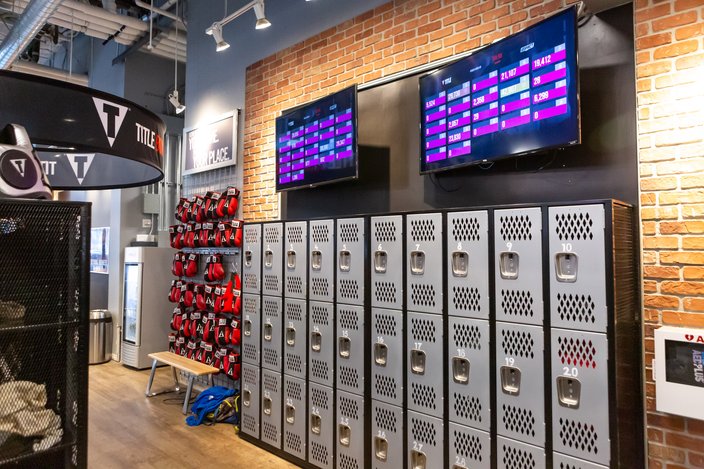 Two large flat-screen TVs near the lockers record scores from the accelerometer recordings on each of the heavy bags.

On a recent Thursday, PhillyVoice popped into TITLE’s Center City location for a tour of its well-lit and impeccably clean gym and try one of the signature boxing classes. Upon entering the gym, you’re welcomed into a gorgeous space by friendly faces who show you to a locker, and get you all set up — and there is some set-up involved in this no-joke workout.

A team member begins by wrapping your hands like a real-deal boxer, weaving impeccably clean wraps in and around your fingers, hands and wrists — a special, yet helpful touch since most of us probably don’t know how to properly use wraps.

Then, you’ll be showed to your heavy bag, which is decked out with sensors that project your score (based on how hard and frequently you’re hitting it) onto a screen to help keep your workout on track. In fact, TITLE is the only boxing club in the world to have sensors on every single heavy bag in the gym, according to Walsh.

The 60-minute class began with an intense cardio warmup.

The club's instructors are actual boxers, not just super-fit locals who have learned a few boxing moves, which provides an authentic experience for everyone who comes in the door. The three-part workout begins with a lengthy series of warm-ups, ranging from standard boot camp moves like squats and lunges to more boxer-like exercises like pretend jump roping and shadow boxing. 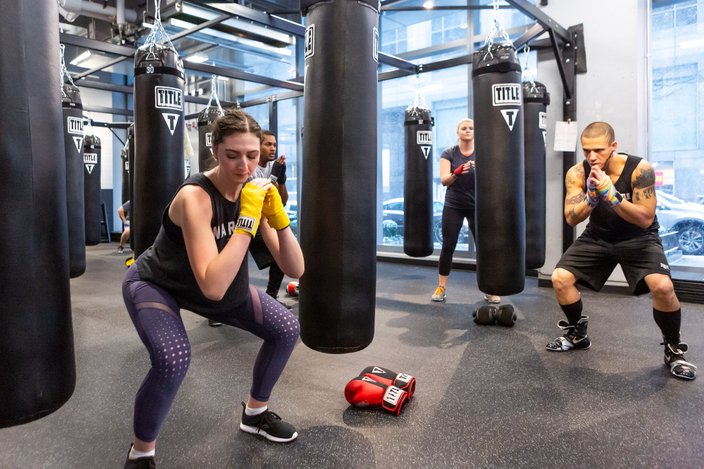 The class is broken up into three sections: a cardio warmup, a heavy bag routine and core workout.

Then, the gloves are strapped on and there’s no looking back. Listen for the bell, watch for the countdown on the screens inside the "ring" and get ready for a coach to lead you through eight rounds. Each round features combinations of the basic boxing moves: jab, cross, hook and uppercut. You would be amazed at how many combinations they can throw together with just four moves. And it almost goes without saying that these combinations will leave you dripping with sweat in no time at all. 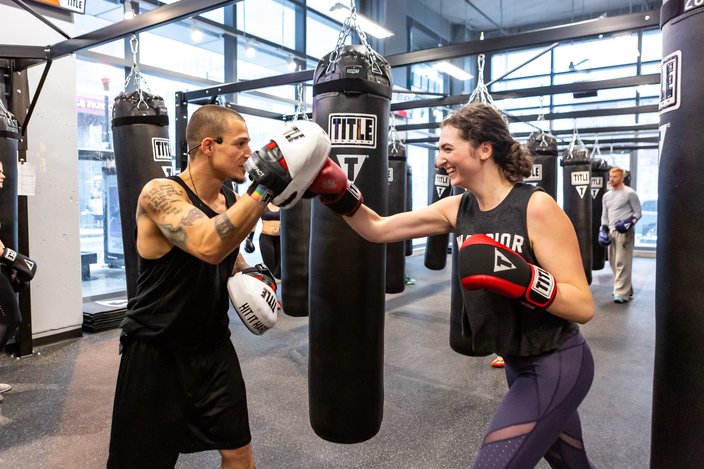 One of the best parts of the workout is the amount of personal attention you get. While there's always one instructor leading every round, you can expect at least two other TITLE team members to be meandering through the bags to lend some advice on form, remind you of the combination or challenge you to a bout with the boxing mitts — the padded gloves donned by a coach or staffer to give boxers a chance to punch a human target.

And just like that, the eight rounds are up. But this challenging, butt-kicking and borderline regretful (yet completely intoxicating) workout was not quite over. When the bell rings again, it’s time for abs. Needless to say, there were plenty of eyerolls and groans coming from my general vicinity since I was already so pooped, but abs it was. Planks, Russian twists, sit-ups and all sorts of other shake-inducing moves were to follow. 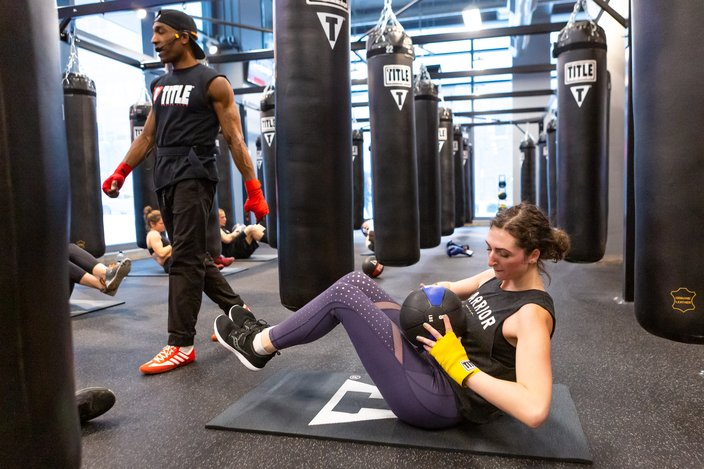 The class was that lead by pro boxer and trainer Kamaal Davis, concluded with an ab-strengthening core workout.

After class, you can check out your final score on the bag. A nice thing about the score screens is that they’re not a leaderboard per se, so they don’t list participants in order of best to worst. Rather, scores are listed by your heavy bag number — which is another nice touch for those who don’t love having their name up on a screen.

All in all, TITLE Boxing Club serves a killer workout (that will leave you sore for days) in a bright and welcoming space that is the polar opposite of the ever-popular nightclub vibe studios. TITLE’s gorgeous windows make it seem like your boxing on the streets on Philadelphia, which is pretty hardcore.

And Walsh has plans for another location to keep spreading the city's love of boxing.

Check out TITLE’s authentic boxing class for yourself — your first class is on the house. You can peruse the schedule and sign up here. Membership options and drop-ins are both available.