Artist was attempting to summon Thomas Eakins — and apparently succeeded? 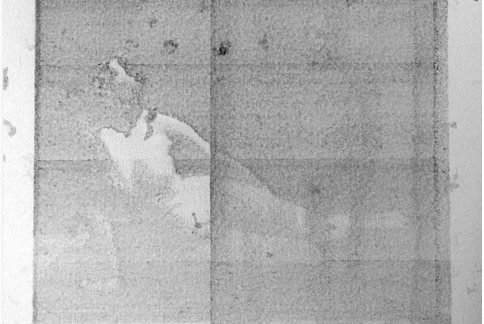 Either a ghost drew this or one of Fernando Orellana's machines became self-aware. These are the only plausible explanations.

You may recall an article that appeared in PhillyVoice in August about an artist named Fernando Orellana ; he makes machines for ghosts to use to communicate with the living. Well, what he really wants is for a ghost to show up and draw something.

His current exhibition at the Pennsylvania Academy of Fine Art (PAFA) is intended to lure the spirit of famous Philly artist Thomas Eakins out into the open by providing the machines, some blank sheets of paper and a nude model or two (the dude was fond of those). With any luck, Eakins or some other ghost would show up and draw or write something.

Orellana, by the way, is not a believer by any stretch. Which explains the wild disbelief he expressed in an Instagram post yesterday:

That’s right. Someone or something showed up and drew something using one of his machines.

We’re waiting for a higher resolution photo, and an investigation into the matter — security camera footage may reveal the culprit, be they worldly or otherworldly. And the machine needs to be checked for flaws. For now, the matter remains unexplained.

But this is the most interesting part of every mystery: The not knowing. So I caught up with Orellana on Facebook and then email, and picked his brain a little bit about the situation.

What are we looking at in this photo?

In the photo you see two robot drawings (one on top of the other) that are based on photos that Thomas Eakins made while he was alive. One of the drawings is of a female subject (I thought it was Eakin's wife but it is not) in a reclining pose and the other is a portrait of Thomas Eakins in the nude. The result looks like a shadowy or ghostly figure standing in front of a reclining figure. For your reference I have included links to the original Eakins photos the robot is drawing:

[Editor’s note: These are NSFW, unless you work in a museum or at a nudie mag.]

Can you please describe the machine in question and what would have to happen for a photo to be produced?

Holding one of Thomas Eakins original brushes inside its machinery, the drawing robot in His Study of Life has been designed to allow a ghost to draw in two distinct ways:

If the robot senses that two of the three readings spike in these sensors, it deduces that a paranormal event has taken place.

The first method for drawing is via a type of joystick designed to be used by the dead. Outfitted with an array of electromagnetic field (EMF) sensors, this paranormal joystick allows ghosts to drive a graphite pencil attached to the robot up, down, left, or right, much like you would do with an Etch-a-Sketch. This method is what the drawing robot is usually doing, waiting for a ghost to operate it. Until this past weekend, it had been doing that for the last month-and-a-half of the exhibition.

The second method for drawing is a bit more autonomous. Inside the memory of the drawing robot are five digitized photographs originally made by Thomas Eakins 120+ years ago. The idea here is that if the Eakins ghost (or any other ghost for that matter) did not want to draw, but instead wanted to see his old photographic memories, he could do that by manipulating three additional sensors on the robot that correspond to EMF, temperature and infrared light (IR). If the robot senses that two of the three readings spike in these sensors, it deduces that a paranormal event has taken place, randomly picks one of the five preprogrammed drawings from its memory and begins to draw it. This is exactly what happened over this past weekend, but it didn't happen once, it happened twice! On Friday, Oct. 14 it drew the reclining figure and on Saturday, Oct. 15, it drew the nude portrait of Eakins on top of the first drawing.

I checked to see if the sensors were working as they should and all indications are that they are OK. I also double-checked my code and didn't see any programming errors. Most likely the two sensors that went off were the EMF and IR, since the museum reports that the temperature in the gallery has stayed well above 32 degrees, which would be the threshold for my robot to consider a significant enough temperature change.

You've been making these machines for awhile — have you ever had results like this before?

To date, anytime one of my machines has been triggered, there was always been an explanation for the event. Be it user error or faulty hardware. This is the first time I cannot explain what happen…yet.

I know you're not really a believer in ghosts, but admit it: You've got to be a little spooked about this.

I would be lying if I did not admit feeling a bit… haunted. All indications do point to a bona fide unexplained or paranormal phenomenon. However, Occam's razor still rings true in that the simplest explanation must be the correct one. In this case, the simplest answer is that at least one of my sensors is faulty (probably the EMF) and I need to run more lengthy diagnostics when the drawing robot comes back to my studio in Troy, N.Y.

The other, even simpler explanation, is that a clever, but mischievous person might be triggering my devices on purpose. Though it is a challenge, this explanation is possible but for obvious reasons I won't go into how that would be done. That said, in order for this explanation to be true, the person would have to visit the museum two days straight, as each drawing takes a minimum of 12 hours to complete.

My friend also suggested that it could be that it wasn't a ghost, faulty electronics or a person at all, but that my robot was becoming self-aware!

My friend also suggested that it could be that it wasn't a ghost, faulty electronics or a person at all, but that my robot was becoming self-aware! That is definitely not the simplest answer, but it sure is fun to think about Skynet first becoming self-aware at PAFA while looking for ghosts.

Regardless, the resulting drawing the robot made is amazing and totally unanticipated. It is as if Eakins (or the robot) has created a new composition from beyond the grave. That the composition includes an image of himself as a shadowy figure without a doubt adds to the haunted nature of this new artwork.