Brian Dawkins is unofficially serving as a coach for the Eagles 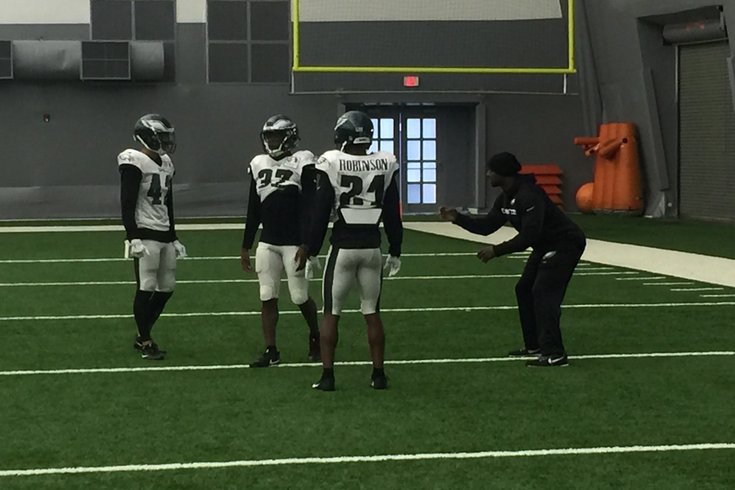 "When we finish practice, he comes over and gives pointers on tackling drills, how to rush the passer, and playing with good leverage, things like that, that helped him out when he played," said starting safety Rodney McLeod. "It's a different situation when you have a Hall of Famer like Brian Dawkins out here, who's labeled as a scout but has a lot of experience with the game, and is here to help guys out. Obviously, his job is in the scouting department, but now that we're on the field, he helps where he thinks he needs to be."

Dawkins has been attending practices, sitting in on film sessions, and coaching players throughout training camp, and Eagles players feel like they have benefited from Dawkins' wisdom, both from a technique and toughness standpoint. The respect that Dawkins garners is obvious.

"He's teaching all those little bitty super super small errors that you're making on the field that he saw when he was playing," said cornerback Jalen Mills. "Coming from a guy like that, at the level he played at each and every week, those little little bitty things they are so monumental to your game and helping you elevate as a player."

"He's the master of being physical," said second-year linebacker Don Cherry. "Obviously everyone knows that he's one of the hardest hitters to ever play the game. He's taught me about getting off blocks, and punishing ball carriers for running into my gap."

Rookie Nate Gerry has attributed some of his ability to transition from safety to linebacker at the pro level to Dawkins' coaching.

"Football is all about technique," said Gerry. " Right now I'm just trying to work on leverage and things like that, and that's one thing that Dawkins has helped me with. Being physical, using my size. I'm not as tall and whatnot, but I have to be able to get lower than the bigger guy."

"He's just always here," said linebacker Kamu Grugier-Hill. "If you ever need me, I'm here. He's always at practice, so we can always go up to him, and say, 'Can you give me some help? What can I do better?' And he takes time out of his day to come help us."

Dawkins' coaching is not just limited to younger players. Even an eight-year veteran like Malcolm Jenkins has incorporated Dawkins' teachings into his game.

"He talks about playing downhill, physicality, but there's also a technique to that," said Malcolm Jenkins. "Even myself, when it comes to tackling, not just getting the guy down, but striking somebody, but there's a technique to that, and that's some of the things that he's been pouring in to some of the guys, including myself, little small things that you can add to your game."

Dawkins' official job with the Eagles is in the scouting department. Unofficially, he is taking it upon himself to do everything he can to help the Eagles win.