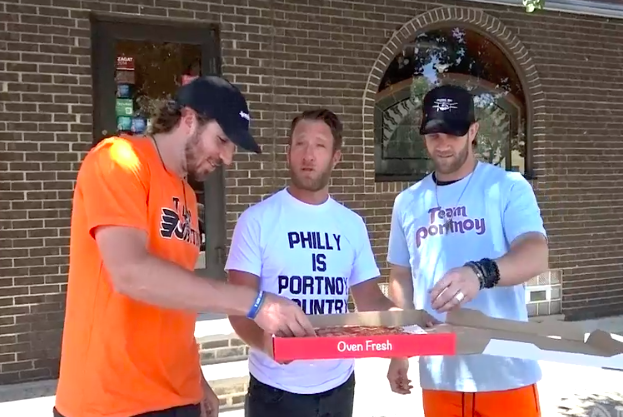 Philadelphia Phillies outfielder Bryce Harper was signed to a $330 million contract to hit a bunch of home runs and bring postseason baseball back to Citizens Bank Park. If he can't do that this year, he's at least going to share his thoughts on the quality of one of the city's top pizza joints.

Harper and Flyers newcomer Kevin Hayes joined Barstool Sports' Dave Portnoy in Port Richmond on Monday to try out Tacconelli's Pizza, one of the oldest pizza places still standing in Philadelphia. The restaurant dates back to 1918 and is best known for its crispy, thinly-sliced brick oven pies.

Portnoy and Barstool Sports CEO Erica Nardini created a pizza review app One Bite that takes them all over the map, particularly in the Northeast, to score pizzas. Portnoy brought Flyers mascot Gritty to New York City last October to review a pizza place up there. He wore a Patriots T-shirt and spent most of the review talking trash about Philadelphia.

This time around, Portnoy mixed up his stock Philly insults, claiming "scumbag" fans here threw batteries at Santa Claus. Santa got snowballs. Batteries were thrown at J.D. Drew. At least get it straight.

As for the pizza review, it's about what you would expect. Harper and Hayes had a few minor criticisms based on their personal pizza preferences, but everyone gave Tacconelli's a high grade.

The Phillies went on to get destroyed 16-2 by the Dodgers on Monday night, so either hanging out with Portnoy or eating pizza is not a good omen for Harper and the Phillies.