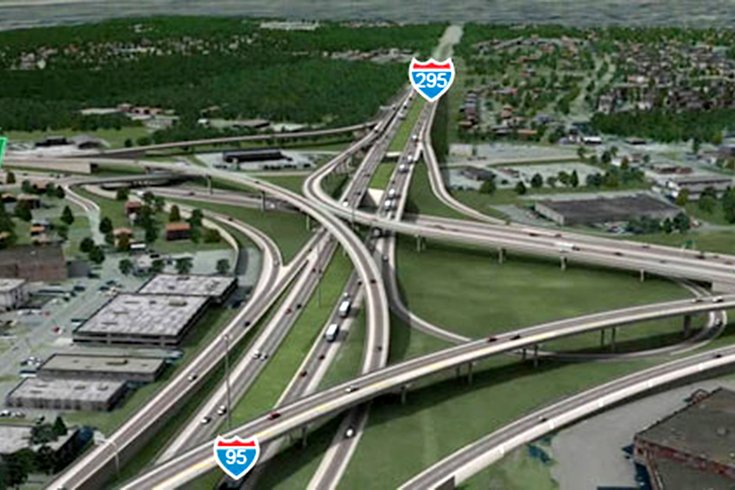 I-95 will be connected to the Pennsylvania Turnpike.

The $1.4 billion project to close I-95's “missing link” in Bucks County is moving ahead.

The 1,920-mile interstate will ultimately be connected to the Pennsylvania Turnpike, just north of Route 413, in Bensalem.

The next step in the years-long project is the widening of the Turnpike from Bensalem to the Delaware Valley exit, according to Brad Heigel of the Pennsylvania Turnpike Commission, who provided an update during Friday's inaugural Annual Transportation Conference. The event, titled "Building for Tomorrow," was attended by about 100 people at Parx Casino in Bensalem. It was sponsored by the Bucks Transportation Management Association, a private, nonprofit membership association that represents its diverse membership in solving highway and transit issues.

Heigel said the turnpike widening phase just went out to bid and is expected to start in 2017. The project includes construction of a new toll plaza just east of Route 1 in Bensalem, which could be done by the end of this year.

All the work is expected to be completed in 2018. But Bensalem Mayor Joe DiGirolamo, a TMA co-founder and its first president, expressed some skepticism, making a comical reference to his own demise.

“There will be a place where you can visit me when it’s done,” he told attendees.

The event also provided an update on the ongoing I-95 work in Philadelphia.

According to PennDOT officials and consultants, phase one work continues between Vine Street and Cottman Avenue with reconstruction being done at the Betsy Ross Bridge and Girard Avenue exits. The Bridge Street ramps will follow next year. After that, in 2017, is the reconstruction of the Allegheny Avenue interchange.

The next phase will include the interstate from Vine Street south to near the Philadelphia International Airport. The third phase will run from the airport to Delaware and the fourth from Cottman Avenue to the Bucks County Line.

Elaine Elbich of PennDOT said the transportation agencies are committed to a “goal to keep all lanes open and minimize construction” during the Pope’s visit to the city in September during the World Meeting of Families.

The Secret Service will determine what is safe and what is not, and there will be some restrictions of transit services, said Byron Comati, director of strategic planning for SEPTA.

If you don’t have to be in the city during that time, he said, it would be a good time to leave.

Comati said construction on I-95 gives SEPTA opportunities to relieve congestion there with improvements elsewhere. That includes possible express bus lines, with all-door boarding, on Roosevelt Boulevard; the planned purchase of 13 to 18 new locomotive trains -- at a cost of $7 million each -- followed by at least 48 new train cars; and the purchase of 48 multilevel coach buses. All of that is expected to take place in the next three years, he said.

U.S. Rep Mike Fitzpatrick, a keynote speaker, said the federal Highway Trust Fund is expected to be insolvent by October. The answer to maintaining federal funding for infrastructure, he said, is a bill he has co-sponsored called The Partnership to Build America Act.

Under the act, American companies would be incentivized to purchase infrastructure bonds by allowing them to repatriate a certain amount of their overseas earnings tax free. A new American Infrastructure Fund, set up by the sale of $50 billion worth of bonds, would then provide low-cost loans or guarantees to state or local governments to finance qualified infrastructure projects.

“A significant number of jobs in the short term would increase our national competitiveness in the long term,” he added.

The bill has been introduced and is in committee in the House. It also has companion legislation in the Senate.