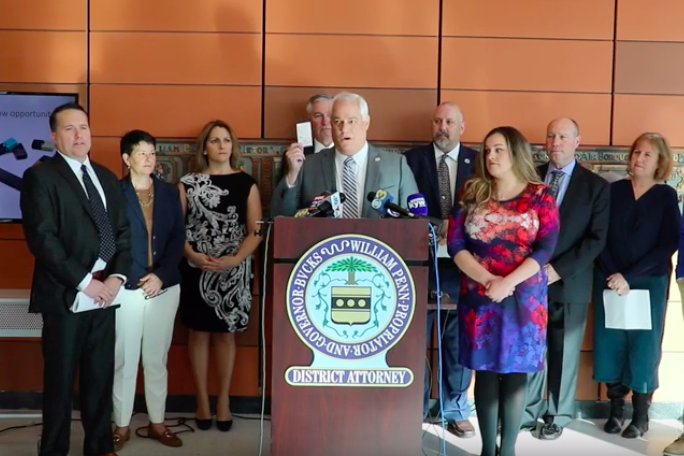 Bucks County is suing e-cigarette maker JUUL for its role in the epidemic of vaping among teenagers. The county seeks restitution, civil penalties and injunctive relief and plans to use anything won in court on educational programs and medical services.

Bucks County has joined neighboring Montgomery County by filing a lawsuit of its own against e-cigarette maker JUUL, the company most widely blamed for the spread of vaping among teenagers.

District Attorney Matthew Weintraub revealed the 63-page lawsuit at a press conference on Wednesday, vowing to stamp out the sale and marketing of vaping products to teens and others under 21 years old, the new minimum age for purchasing tobacco in Pennsylvania.

"Through deceptive marketing that targets our children and with its network of retailers, JUUL has created a public health crisis,” Weintraub said. “Together we are sending an unfiltered message to JUUL and to all retailers who knowingly traffic e-cigarettes to minors: your false, deceptive and harmful business practices will not be tolerated in Bucks County.”

The lawsuit names California-based JUUL Labs, New Jersey-based JUUL pod maker EONSMOKE LLC, and a pair of gas stations in Quakertown and Warminster that were previously busted for selling vaping products to minors.

The lawsuit, one of many facing JUUL Labs, comes after five years of steadily increasing rates of vaping among teenagers. The issue gained widespread attention last year amid a rising number of vaping-related lung illnesses in the United States, which the U.S. Centers for Disease Control and Prevention has linked primarily to ingredients used in black market THC-infused cartridges.

The American Lung Association this week gave failing grades to Pennsylvania for its progress in reducing smoking among teenagers.

“In Pennsylvania, our smoking rates remain at 17%," said Sarah Layer, director of advocacy for the ALA in Pennsylvania. "Sadly, with the youth vaping epidemic still rising, we may have lost an opportunity to make the current generation of kids the first tobacco-free generation."

Late last year, the Trump administration issued a ban on flavored and mint e-cigarette pods that will take effect in the coming months.

Weintraub said any restitution gained from the lawsuit will be used for educational programs and medical treatment for those impacted by vaping illnesses in Bucks County.