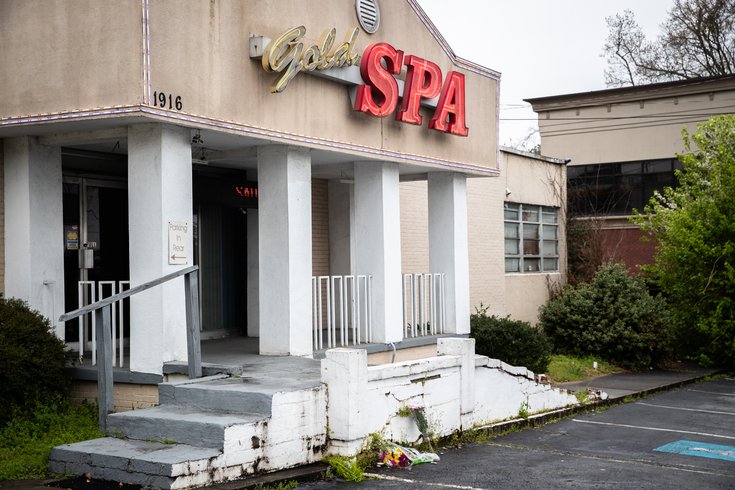 Bouquets of flowers lie outside Gold Spa in Atlanta in March 2021, when a gunman opened fire at a series of massage businesses and killed eight people. In Bucks County, Pennsylvania, officials have adopted a new ordinance that will place stricter regulations on massage parlors.

A new ordinance established in Bucks County this month will tighten regulations on massage parlors to deter illicit activity and uncover possible human trafficking. The measure is the first of its kind by a county government in Pennsylvania.

In recent years, small massage parlors have increasingly drawn law enforcement scrutiny as suspected hotbeds of prostitution and forced sex labor. The Polaris Project, a Washington D.C.-based non-profit, cited statistics from The National Human Trafficking Hotline in 2017 that found about 3,000 of the more than 32,000 cases of human trafficking logged that year were tied to massage parlors.

The organization's report on illicit massage businesses in 2017 estimated that about 700 such businesses operate in Pennsylvania, New Jersey and Delaware. Nationally, that number stood closer to 9,000 in a dark industry whose revenue surpasses about $2.5 billion annually.

Last Wednesday, in recognition of National Human Trafficking Awareness Month, Bucks County Commissioners adopted a series of new regulations that will make it harder for these businesses to operate and help investigators determine if illegal activity may be occurring.

“In about the last decade, one of the questions that I was so often asked in dealing with human trafficking was, does it really exist in Bucks County? And it does,” assistant county solicitor Chelsey Jackman said at a public meeting last week.

January is Human Trafficking Awareness Month, so it's fitting that the Bucks County Commissioners at this week’s public...

The new ordinance includes a series of requirements governing how massage parlors are licensed, how they must be maintained and during which hours they are permitted to operate. Some local governments, such as Falls and Middletown townships, already have existing ordinances. The county-wide ordinance will set more far-reaching standards for the industry when it takes effect later this year.

Massage parlors will be limited to operating between the hours of 7 a.m. and 10 p.m. They'll be required to keep their front doors unlocked during business hours and anyone younger than 16 years old will be barred from visiting massage salons unless accompanied by a parent or guardian.

All customers who patronize these businesses will be required to enter using the front door unless they receive an exemption from the county health department. An owner or manager must be on duty during all business hours, and must maintain a list of clientele and services provided for at least 90 days after service. All charges must be stated clearly in business brochures and should not be changed without a corresponding update.

A key provision of the new ordinance makes it unlawful for an owner or employee to "expose their sexual or genital area to any customer or other person," according to the Bucks County Courier Times. It also explicitly prohibits owners or employees from touching, fondling or otherwise having any physical contact with a sexual or genital area of a customer, or making an offer to do so.

Those who violate the ordinance may be subject to fines ranging from $100 to $1,000 and could be found guilty of violating the "unlawful conduct" section, which calls for possible imprisonment up to 10 days.

When authorities investigate these businesses, which are often located in strip malls, they sometimes encounter underage immigrants who live at these establishments and are coerced into providing sexual services as a means to cover their rent — effectively living as indentured servants to their traffickers. And in many instances, though these businesses may appear as single storefronts, they operate as networks that set up locations in areas with lax regulations.

A large number of employees who work at these illicit businesses do so in search of high earnings, however, and assume great personal risks in order to provide for themselves and their families. Many of these women are undocumented immigrants who may lack English proficiency and possess few immediate options for adequate employment and a living wage.

National awareness of these businesses has grown in recent years following a massive bust covering several counties along the Treasure Coast in Florida, where billionaire New England Patriots owner Robert Kraft was caught patronizing a spa called Orchids of Asia. The charges against Kraft were dropped after a Florida appeals court ruled that police violated his rights by secretly installing a camera inside the business.

Frequently, police interventions at these businesses end up costing the women who work there more than the customers who seek their services. Of the 57 people arrested in three Florida raids in 2019, all but three were women. Most were immigrants from China, Cuba, Haiti, Guatemala and elsewhere around the world. Forty-two of these women faced prostitution charges.

Last March, the plight many of these women face was underscored by a deadly series of shootings at parlors in the Atlanta metropolitan area. The 22-year-old gunman, described as a sex addict, allegedly targeted these businesses to remove his "temptation" and killed eight people at three businesses. Seven of the victims were women and six were Asian.

In Philadelphia, police estimated in 2018 that approximately 100 illicit massage parlors operated across the city, with a concentration in Rittenhouse and Chinatown.

Officials in Bucks County are hopeful that the new ordinance will create better industry practices and help legitimate massage businesses operate more safely. The ordinance will take 180 days from its passage in order to give businesses an opportunity to adjust and ensure that they meet safety standards.

Some common signs the public can use to identify illicit massage parlors include the following:

•Women appearing to be living at the business

•A locked front door that customers can only enter if buzzed in or entrance through a back or side door.

•An excessive amount of security or video cameras

Anyone who suspects that an establishment in Bucks County is operating illicitly may contact the Department of Consumer Protection/Weights & Measures at (215) 348-6060 or email consumerprotection@buckscounty.org.