Dr. Katie Venanzi has been caring for the feline since he was released from the BluePearl Pet Hospital in April 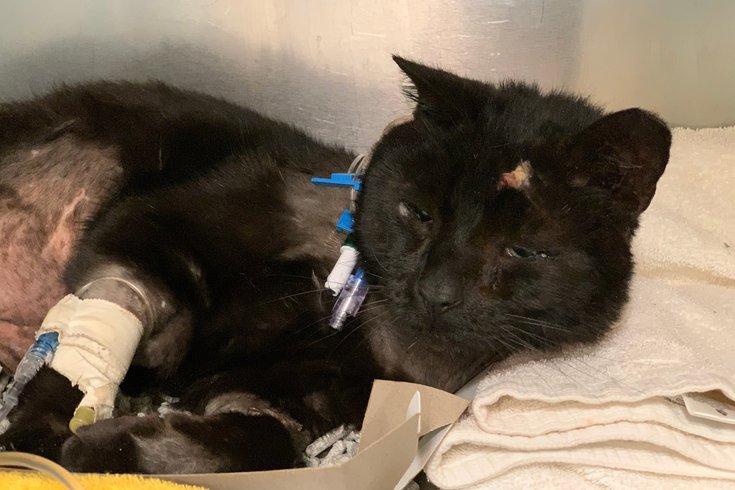 Buddy the cat, who was attacked by two dogs in Frankford in March, has been officially adopted by Dr. Katie Venanzi, the veterinarian who fostered him after his release from the hospital in April.

Buddy the cat, who was mauled by two dogs in Frankford in March, is continuing to recover and has officially been adopted, said Gillian Kocher, a spokesperson for the Pennsylvania SPCA.

Dr. Katie Venanzi, the veterinarian who has taken care of Buddy since his release from the BluePearl Pet Hospital, has been looking to adopt him since the middle of April. She and her husband Dave said they fell in love with Buddy's "spunky" personality and knew they wanted to keep him.

The PSPCA was the first to release a video of the gruesome attack, in which Buddy was approached by two dogs after their owners saw the cat sitting by himself on the porch of a home on the 1600 block of Granite Street. The owners dropped the dogs' leashes and allowed them, sometimes even encouraging them, to attack the cat.

Buddy was in critical condition by the time someone from inside the house came outside to intervene and was taken to the PSPCA. He was released from the pet hospital into foster care at the beginning of April, where Venanzi and her husband, Dave, introduced him to their other foster cat, Teddy.

There, Buddy has been recovering while getting to know his new family. Now, he spends most of his days lounging on windowsills and "watching the world go by" from the front screen door of his forever home.

"Buddy is a symbol of everything we do here at the Pennsylvania SPCA," the PSPCA posted on Facebook on Thursday. "Our Humane Law Enforcement team rescues animals every day from cruelty and neglect. Our medical team works miracles to breathe life back into the most critical patients. And, our foster care and adoption teams find our animals the very best homes."

At the end of March, two juveniles were arrested in connection with the dog attack after walking into the PSPCA with a parent to address the incident. They were both charged with animal fighting, aggravated animal cruelty and conspiracy, two of which are felonies.

A GoFundMe for Buddy's medical expenses went viral following the incident, and the PSPCA said that the remaining funds will be used to help save other animals suffering from cruelty and neglect.

Though the PSPCA's journey with Buddy the cat is over, his owners set up an Instagram account to share updates on Buddy, his recovery and his new life.

The PSPCA is also running a promotion of dog adoptions as the organization is currently full. From now until Sunday, May 29, all dog adoptions are $25.