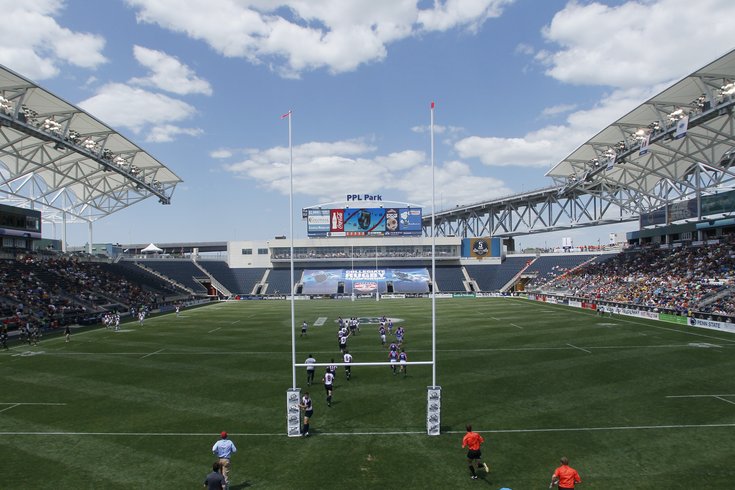 Amid the myriad empty beer bottles strewn over the parking lot of PPL Park on Saturday afternoon, along with the lines at the craft brewed ale shacks and billowing smell of sweet barbecue smoke that permeated the air, it was easy to lose sight of the fact that there was actually a demanding sports event taking place inside the stadium.

Despite the frat party ambience, the tenor of the 20-team Penn Mutual Collegiate Rugby Championship becomes apparent quickly once a player is seen lying on the training table getting his left eyelid sewn together and then going back out on the field; or seeing players whose limbs started the day free suddenly wrapped in tape like marching mummies, click-clacking their way down the cement stairs to the PPL Park turf.

That ruggedness applied to every player on every team in the five-pool tournament, which includes locals St. Joseph’s, Temple and Penn State. But perhaps no team personifies the guile, agility and bone-crushing toughness required to succeed in collegiate rugby sevens, which will be an Olympic sport in 2016, than two-time defending national champion California.

After one day, the Golden Bears are in a good position to threepeat, going 3-0 in pool play. Cal’s road may possibly be impacted on Sunday in the championship rounds by Arkansas State, which has not lost a sevens match since 2012 and is competing in this event for the first time. The Red Wolves were USA Rugby 2012 and 2013 national champions in a separate tournament that used to be held in the fall.

When USA Rugby moved its national tournament to the spring of 2015, bypassing the fall 2014 event, and competing directly against the collegiate rugby championships, Arkansas State opted instead to compete in the Penn Mutual collegiate tournament, which is considered more competitive and deeper.

The Red Wolves, who are 3-0 in pool play, feature a tiny ball of dynamite in Dylan “The Little General” Carrion. They’ve outscored their opponents (Michigan, Texas and UCLA) by a combined 59-15. Still, California has smoked its three opponents (Boston College, Notre Dame and Virginia Tech) by a combined 84-17, the largest point differential of any team in the tournament.

That’s not enough for Golden Bears’ coach Jack Clark, whose standards are kept quite high.

“I thought we were a little rusty today, and I thought it was an uneven performance, especially in that last game (12-7 over Virginia Tech),” Clark said. “I thought we made it really hard on ourselves. We were down to six guys, and I thought we showed some guts. As long as we can clean up our game tomorrow, we should be in pretty good shape.”

Penn State and St. Joe’s each walked away from pool play with 1-2 records, while Temple was shutout, going 0-3.

And though none of the locals will likely go deep into Sunday’s semifinals and final rounds, they did provide a spark on Saturday, with the most exciting finish of the afternoon. Penn State just edged out St. Joseph’s 24-21, on a try on the last play of the match.

“Today was a long day. We lost to Arizona and we lost a close one to Dartmouth, so this was great to scrap for that last one and get us a good feeling for all of that hard work we put in,” Penn State coach Chris Amoratis said. “It’s been a trying season for us. We took a lot of injuries coming out of 15s. We played long and we’re tired and sore. We’re doing well. I’m happy with the performances we put in—and I’m really proud of the guys for putting it together and sticking with it at the end.”

While the victory charged up the Nittany Lions, it was devastating to the Hawks.

“I think fatigue set in on both sides, and we had a lot of opportunites to close it out in the end, but we seemed to have some tough calls and we didn’t do it ourselves,” Hawks’ coach Paul Downey said. “There were a lot of tough breaks that lost the game for us. We’re going to need some help on Sunday.”

Rugby may be the only sport where a Life University, a tiny chiropractic school out of Marietta, Georgia, can get on the field and devour a major school like Alabama, 36-0.

“Rugby is an amazing sport, and once you play it, like I did for 15 years, you understand it a lot better,” said Dallas Mavericks owner and Shark Tank star Mark Cuban, who was at PPL to cheer for his alma mater, Indiana. “It’s not even about being tough. It’s about the love of the sport. You’re going to go out there and run hard, hit hard and tackle. You never stop. I’m in love with the sport and I always have been. I played at Indiana and as I got older I played the old boys.”

Here are the eight teams that advanced to the quarterfinals: