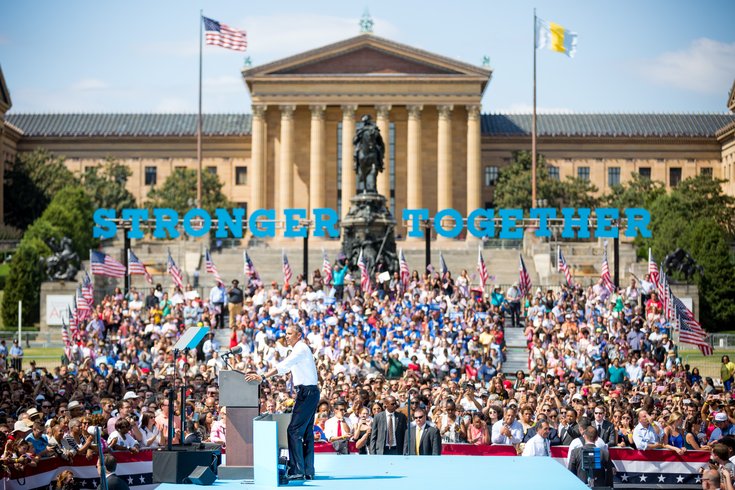 Something that President Barack Obama said at Eakins Oval this afternoon really bothered me.

No, it wasn’t shouting out his beloved Chicago Bears a few days before they meet their Carson Wentz maker. This being Philly, it could’ve easily been that, but he tempered it enough by relaying Vice President Joe Biden’s respect for this city’s new quarterback.

Some of you disagree. Just like you did last week. And last month. And last year.

And just like you will next week. And next month. And next year. And forever, regardless of what happens on Nov. 8.

So, back to what Obama said that riled me up. It was two simple words amid his 40-minute championing of Hillary Clinton as his preferred successor: “eight weeks.”

That’s how much time is left before the (presumed) end of a presidential election that’s already fractured familial and friendly relationships.

Another way to qualify that in the space-time continuum is this: It’s an eternity after what’s already felt like an eternity, even if the president maintained that he’s “more optimistic about our future than I’ve ever been.”

He noted that this is one of the last times he’ll be in town as president, thanked Philly for all the support it has shown him and dropped a “Thanks, Obama” in swag fashion when an audience member shouted out the fact that gas costs around $2 a gallon now.

Heck, he even dropped a Rocky Balboa analogy (him running up the steps in 2008 but Clinton never being too far behind him during the primary) into the mix.

“The choice you make, the choice we make, just eight weeks from today will determine the direction of this country for a very long time,” he said. “And I’ve already said this: This is not the usual choice between parties, and left and right. This is more fundamental. This is a fundamental choice about who we are as a people. This is a choice about the very meaning of America.”

When everything’s already been said, what’s left to say?

Sure, some people out there claim to be undecided about for whom they’ll vote. I don’t know any of ‘em, but I’ll take their word for it, I guess.

And sure, with constantly fluctuating polls currently having Trump within striking distance (if only in a popularity, not electoral college sense), the trio of forthcoming debates could conceivably shake things up.

I guess that’s reason enough to hold off on wishing it would all just go away already. Nothing good’s ever come over a hands-over-ears-la-la-la-la-la-I-can’t-hear-you approach to life.

Instead of continuing to vilify people who disagree with us – in the same exact way the tenor of this political season has forced us to do time and again – let's use these eight weeks to make sure the damage to the national fabric isn’t irreversible.

Regardless of who wins the election, we still need to co-exist with one another, right?

In the meantime, I’ll be scouring the wires to see if anybody tries to link the fact that somebody fainted in the Eakins Oval audience (27:12) to a conspiracy theory involving Clinton’s health.

If we let things keep going the way they're going – with paranoia, fear and aggressive angst defining the mood of our times –that’ll be the sanest thing we hear in the next eight weeks.

Anyway, thanks for listening.

Please send some positive thoughts and prayers to your higher power to help me abide by that call to sanity for at least the next 20 minutes. I, and we as a nation, need all the help I, and we, can get.