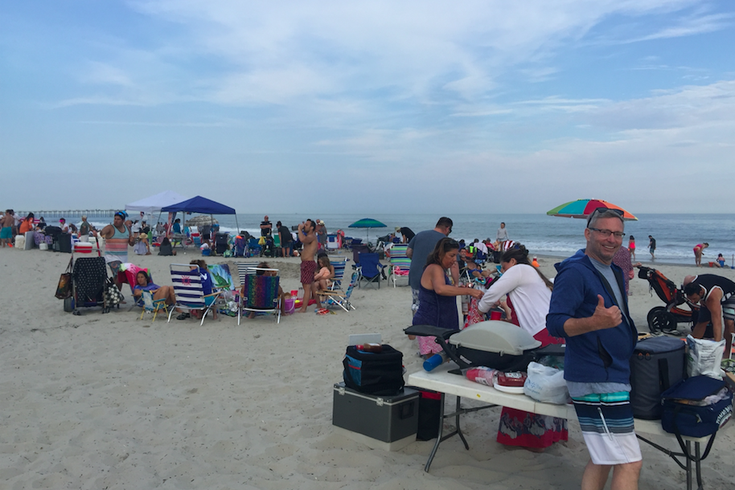 Grilling on the beach on the Fourth of July.

It’s gotten to the point where I don’t think you people like anything about the beach.

First came the Ask Hickey question in which I was, well, asked to ponder the worst people to share a spot on the beach.

Then, there was the initial onslaught of “Yo, you missed these cretins” emails for which another post was created.

Well, three days later, the responses continue clogging my inbox and the comments sections on those posts.

Since I promised to share responses widely, the time has come for a third post regarding this important issue.

Some have dug their heels in the sand of the locals vs. shoobies battles.

Others have taken their grievances off the sand and into the resort communities.

Me? I just wish I’d have asked what you folks actually LIKE about the beaches.

For me, seeing my lad and his friends smile as they boogie board and gather shells, relaxing with my bride (and a Daisy Cutter), monitoring the latest bikini fashions and chatting with the Ice Cream Man who’s celebrating his 50th year on the job sit atop that list.

If you want to make me feel better about the Jersey Shore, drop a line with suggestions about the Best Kinds of Beach People through Facebook, Twitter or email (with "Best Beach People" in the subject line)

But enough with the positivity. Here’s the latest in Worst Beach People suggestions:

“How about playing your toss games, ring games, horseshoes up beach, not where people are trying to relax or kids may get bopped? Common sense, man!” – Frank V.

“People who think they should play football, soccer, beach volleyball (with no net), and ultimate frisbee at full speed in the middle of a crowded beach.” – Suzanne F.

“People that don't pay attention to their kids wandering off.” – Dana M.

“Your annoying kids you can't control kicking sand on everyone as you take a nap. Look, the other beach goers are not your babysitter. We are several yards away from you giving plenty of room for sand castles. When they run past us kicking up sand like they're doing a ‘burnout’ as you snore the afternoon away really wants us to bury you up to your head. At least you won't get sunburnt. ...

“Boat Ramp etiquette: So, you just bought your first boat but live in the mountains of Pennsylvania. If you can't get the boat down the ramp and straight after 15 minutes, maybe you should go to a marina and have them drop it in the water for you. The rest of us would like to enjoy time on the water before lunchtime.” – Rob T., who also cited “left-lane drivers and those who speed up in a lane that’s about to end to cut off others who waited respectfully in a traffic jam

“You should have included ALL smokers, not just cigars. Cigarette smoke is just as foul. There is little that could be more irritating than finding out that a smoker is sitting upwind of me and has to light up all afternoon. They should leave the beach to smoke!!” – Cathy P.

“People who smoke at the beach. At least go to the back away from everyone so other people don't have suffer from your disgusting life choice.” – Chris M.

“How about people who play loud obnoxious music?” – Modris1

"People who play their radio/music loudly should be near the top of the list. The noise pollution is especially annoying as the players rarely have my excellent taste in music. And, the beach is for the sounds of the sea!" – Barb L.