What they're saying: The Carson Wentz era burned out in Indianapolis 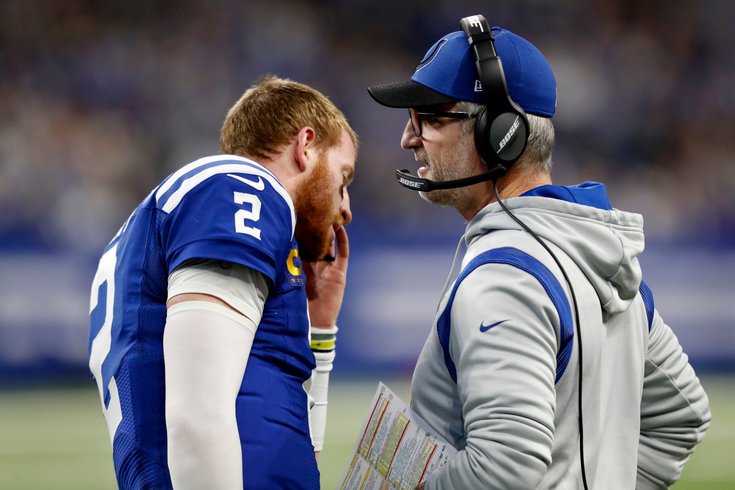 The last 48 hours have been a whirlwind for quarterback news across the NFL. Aaron Rodgers is remaining in Green Bay with a gigantic new contract. Russell Wilson (and Ciara) are on their way to the Mile High City. Most notably for Eagles fans, former franchise quarterback Carson Wentz is headed back to the NFC East with the Washington Commanders.

How did Wentz fall so far?

As has been discussed an infinite amount of times, Wentz played like an MVP in 2017 before suffering a career-altering knee injury. Nick Foles became a beloved folk hero to both the Eagles roster and the team's fan base. Wentz had high highs and low lows in 2018 and 2019 that encouraged the belief that he could be that 2017 version of himself once again, but his crippling 2020 campaign put an end to that dream in Philadelphia. He then became Frank Reich's ultimate reclamation project in 2021 before an embarrassing collapse to end the season that ended the Colts' playoff hopes. Wentz is now gone from Indianapolis, on his way to his third team in as many years.

It's been 459 days since Wentz started a game for the Eagles, but he remains a huge talking point both locally and nationally. And that's the jumping off point for our latest "What they're saying" feature.

Keefer, who covers the Colts for The Athletic, did a deep dive on how Wentz's tenure in Indy swiftly fell apart, detailing friction with ownership, his teammates and even the coach who hand-picked him:

The quarterback, who learned he was on shaky ground with the organization over the last month, reached out to Irsay in hopes of setting up a meeting to “clear the air,” a source said. Irsay declined the meeting because he was out of town. The two spoke later.

Last year’s trade, then, ends as an abject failure just 12 months in and will go down as one of the worst in the franchise’s recent history. It’s also the most consequential miss of Chris Ballard’s five-year run as general manager: Indianapolis sent first- and third-round picks to Philadelphia for a quarterback who lasted one year with the team and failed to lead them to the playoffs.

Irsay’s furor has waned little since the Jan. 9 loss in Jacksonville, and the fact that the game was never even close — the Colts lost 26-11 only after scoring a meaningless fourth-quarter touchdown — still mystifies him. With so much on the line, his team played its worst football of the season. [The Athletic]

McCrystal writes that the Commanders trading for Wentz doesn't preclude them from potentially drafting a quarterback in next month's draft. Washington has the 11th pick and could use that and potentially take the first QB off the board. I can't imagine that would thrill Wentz, as the second-round selection of Jalen Hurts in 2020 caused irrevocable tension that led to Wentz's departure from the Eagles.

At this point, it’s unclear if the acquisition of Wentz changes Washington’s draft plans. Wentz has two years remaining on his contract, but Washington could easily bail after 2022 if needed.

Wentz will likely make Washington too competitive in 2022 to be in the mix for next year’s highly touted quarterback prospects C.J. Stroud of Ohio State and Bryce Young of Alabama. So it’s possible Wentz was brought in to help Washington win immediately, while the Commanders also snag a quarterback at No. 11 to groom for the future.

The presence of Wentz may actually increase the odds Washington drafts Liberty’s Malik Willis at No. 11.

Willis is highly unlikely to be ready to start in 2022 and Washington clearly wants to win now. So drafting Willis without a veteran in place would have sent the team down a different path. [Sharp Football]

Gowton can't believe Washington gave up so much draft capital (a swap of 2022 second-round picks, a 2022 third-round pick, a 2023 third-round pick that could become a second) for a player the Colts clearly had no intention of having on their roster this fall.

Everyone knew that Washington was very desperate for quarterback help. They weren’t shy to admit as much publicly. But trading for Wentz is a whole new level of desperation.

He offers more upside than Taylor Heinicke from a physical talent standpoint, to be sure. But is he even definitely better than him at this point? And by a significant margin?

You really weren’t deterred by the Colts being so willing to give up on him just one year after they traded a first-round pick (No. 16 overall) and a third-round pick to get him? You aren’t concerned that Frank Reich, who was Wentz’s biggest remaining backer in the NFL, no longer wanted to work with him?

Washington gets so, SO much wrong both on and off the field. This is just another big, embarrassing mistake for them. [BGN]

Welcome to the Dark Side

Kaye writes that going from a great environment in Indianapolis back to the NFC East with the Washington is a rough switch:

The Colts’ smear campaign on Wentz didn’t do much to hurt his trade value after all. While the quarterback has been run out of another town in less than 12 months, he doesn’t have to stick around another bad situation. That said, he’s headed back to the NFC East and will face his former team, the Eagles, twice a year, with one matchup coming at Lincoln Financial Field.

Wentz probably doesn’t care about his villain status among Eagles fans, but his landing spot with an NFC East rival will make his heel turn more complete than Darth Vader’s switch to the Dark Side.

Yes, Wentz hasn’t played up to the level of his 2017 performance prior to his ACL injury. However, he is still a viable starting QB. And Ron Rivera and the Commanders clearly still believe in him enough to obtain his entire financial commitment.

A third team in three years is really bad public relations, but Wentz has never seemed to care much about that anyway. He’s out of a rough situation, but he’s also headed to one of the least appealing squads in the league. But hey, at least Terry McLaurin and Antonio Gibson are there, right?

Santoliquito, whose 2019 story on Wentz's locker room issues spearheaded the discussion around the quarterback's personality, follows up on that original expose. Former Eagles players laughed at Wentz being dealt to the Commanders, resigned to believing he won't change his ways in the NFL.

“When Carson was in Philly, we all wanted him to succeed, and I’m sure that was the way in Indy,” said another source of the original PhillyVoice 2019 Wentz story. “He was never the same after he got hurt (Dec. 10, 2017 vs. the Los Angeles Rams). He was a reason we won that Super Bowl. Everyone thought it, maybe except him. This all makes me laugh. Carson has all the ability in the world. He just can’t help it. He gets in his own way. The stuff about him being ‘selfish,’ not a ‘good leader,’ that he shirks up when he’s coached hard? We’ve heard it before, haven’t we?

“Good luck with that Washington. Do they really think anything is going to change?” [PhillyVoice.com]