If Frank Reich couldn’t fix Carson Wentz, no one can 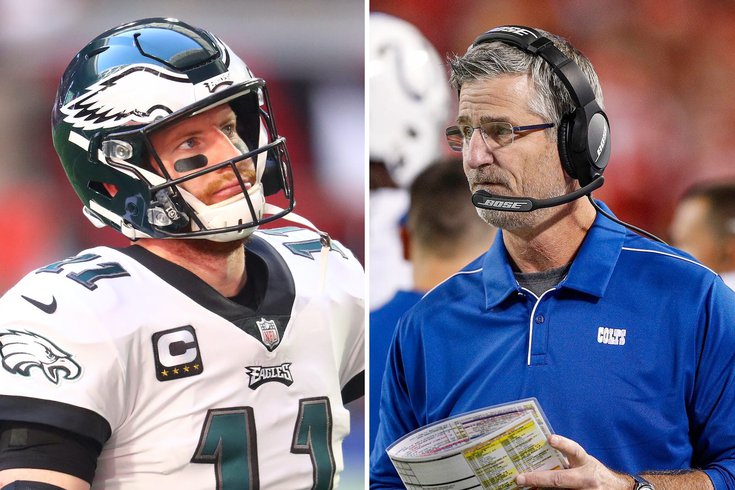 At one time or another on Wednesday afternoon, a bunch of guys wearing Super Bowl LII championship rings were laughing. News had just come out that the Indianapolis Colts had traded quarterback Carson Wentz to the Washington Commanders for a 2022 third-round pick and next year's third rounder that can convert to a second rounder based on incentives (the trade cannot be finalized until the new NFL year begins March 16, and also contained a swap of second rounders and a seventh rounder for Washington).

Among the reasons why Wentz was traded were believed to be that “some grew frustrated at what they deemed a lack of leadership, a resistance to hard coaching and a reckless style of play,” from Wentz, according to the well-documented story by The Athletic’s Zak Keefer. This will be the third team Wentz will be with in as many years.

Perhaps no quarterback in NFL history with a $128 million contract has ever been to three different teams in three years. That’s how adamant the Colts were about getting rid of Wentz. And they did it without a safety net. The Eagles had Jalen Hurts. Look at the Indianapolis depth chart and Sam Ehlinger, a 2021 sixth-round pick who hasn’t thrown a pass in an NFL game, is currently listed as the starter ahead of James Morgan.

It doesn’t come as a surprise at all to a bunch of guys with Super Bowl LII rings who lived it.

Colts’ coach Frank Reich was supposed to be the remedy. He was hand-chosen by Wentz to be his personal “quarterback whisperer.” The belief was Reich would rekindle the magical 2017 form Wentz had before a knee injury wiped out what may have been an MVP season, topped by winning Super Bowl LII. Wentz even had his “pal,” Press Taylor, the former Eagles’ coach, in Indianapolis with him, serving as a senior offensive assistant to Reich. Taylor has since rejoined Doug Pederson in Jacksonville as the Jaguars’ new offensive coordinator.

Instead, Wentz, who turns 30 this December, continued to languish — and he only has himself to blame, it appears.

“It doesn’t surprise me (that Wentz was traded),” said one of the original sources in the PhillyVoice January 21, 2019, story that brought to light many of the behind-the-scenes issues with Wentz. “Carson can’t help but being Carson. You had guys yelling in Philly about him. Everyone was listening, except the Colts (laughs). Frank Reich is a good dude. If Frank Reich can’t help him, no one can.”

Even while in Philadelphia, Reich and quarterback coach John DeFilippo had constant battles with Wentz, multiple sources acknowledged. He stubbornly pushed back against running certain plays. For example, there was one red-zone play Reich and DeFilippo implored Wentz to use. He kept pushing back, and pushing back, until finally, during the Super Bowl 2017 season, Wentz acquiesced and ran it.

It resulted in a touchdown to tight end Zack Ertz. From then on, Wentz couldn’t get enough of the red zone play. When constantly reminded to save himself for another play, Wentz seemed to greet that advice with deaf ears. During the Eagles’ 28-23 victory at Carolina on October 12 during the Super Bowl season, the game which convinced the Eagles that they could make a Super Bowl run, Reich had constantly told Wentz to slide more, which has been well documented.

Wentz took off during one play and lowered his shoulder to gain additional yards. Reich fumed. He had warned Wentz to be smarter and protect himself. Wentz may have scored macho points, but those don’t translate well to NFL scoreboards when it jeopardizes your franchise quarterback’s health — and Wentz had a history of health issues going back to his playing days at North Dakota State. Viewed as courageous to some, it was viewed as reckless to others.

It’s a tag that apparently followed Wentz to the Colts, according to the Keefer story.

Another interesting facet to the Keefer story was Wentz’s “resistance to hard coaching.” DeFilippo has an old-school edge and pushed Wentz to his best season as a pro. Duce Staley, the long-time former Eagles’ running backs coach, coached hard, too, and was often reminded by Eagles’ brass to lighten up, according to numerous sources. The Eagles prefer, according to sources, “a softer approach.” It’s a reason why Staley is in Detroit and no longer with the Eagles, and why Wentz preferred the coddling of Taylor as opposed to the demanding nature of DeFilippo.

“I never saw anything like it,” said a former Eagles’ assistant coach, in reference to the Taylor-Wentz relationship. “It was as if the player was coaching the coach.”

In Philadelphia, Wentz had a direct line “to the bat phone,” meaning Eagles’ owner Jeff Lurie, and wielded some power. In Indianapolis, apparently, Wentz had no such luxury. He was there strictly on Reich’s recommendation. And according to the Keefer story, was held on a very short leash by Colts’ owner Jim Irsay. The Eagles were willing to tolerate Wentz, since he was Lurie’s pick. Wentz was guarded on and off the field, sometimes alienating himself from teammates. Again, it was a label that he was unable to shed in Indy.

Wentz’s refusal to receive the COVID-19 vaccination didn’t help. In September, Wentz’s decision appeared to rub Irsay the wrong way, when he told Indianapolis WXIN’s Chris Hagan that Wentz not being vaccinated against COVID-19 makes it “difficult” to depend on him. Week after week, Wentz took the chance of being placed in COVID-19 protocol, while not only risking his health, but the health of his family and his teammates. The “selfish” label he received in Philadelphia was grasped quickly by the Indianapolis media — and the Colts.

Four years ago, a group of players fresh off a Super Bowl LII victory wanted another. They all credited Wentz for getting them there in 2018. Many blamed Wentz for not getting them back in 2019.

Washington Commanders coach Ron Rivera has a sound track record. “Miracle worker,” however, does not fall under his job description. Scott Turner, the son of former NFL head coach and Super Bowl winner Norv Turner, is the Commanders’ offensive coordinator. He’s worked with the enigmatic Cam Newton and Sam Bradford. He graduated UNLV with a degree in psychology.

He may be putting it to good use this season.

“When Carson was in Philly, we all wanted him to succeed, and I’m sure that was the way in Indy,” said another source of the original PhillyVoice 2019 Wentz story. “He was never the same after he got hurt (Dec. 10, 2017 vs. the Los Angeles Rams). He was a reason we won that Super Bowl. Everyone thought it, maybe except him. This all makes me laugh. Carson has all the ability in the world. He just can’t help it. He gets in his own way. The stuff about him being ‘selfish,’ not a ‘good leader,’ that he shirks up when he’s coached hard? We’ve heard it before, haven’t we?

“Good luck with that Washington. Do they really think anything is going to change?”