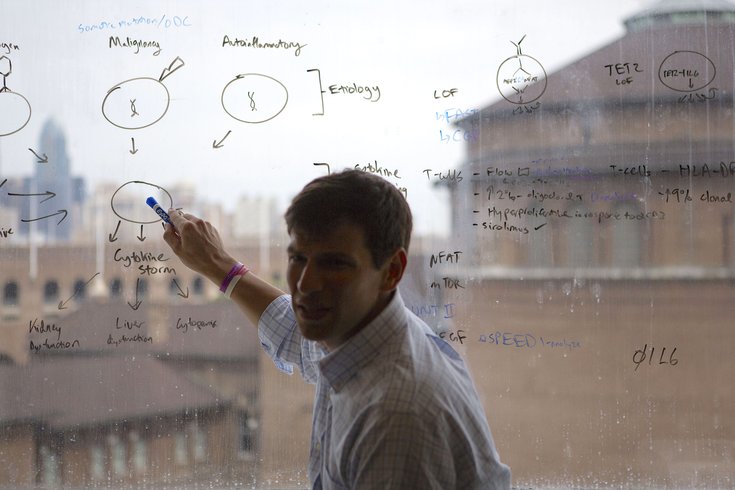 Dr. David Fajgenbaum says he considers his life to be in 'overtime,' having survived five life-threatening hospitalizations caused by Castleman disease. He's leading a clinical trial of siroliumus, a drug that could help treat some people with the disease.

David Fajgenbaum's life went into overtime the moment a priest read his last rites in November 2010.

At least that's how the Penn Medicine immunologist views his last nine years.

That belief has reshaped the way Fajgenbaum confronts idiopathic multicentric Castleman disease, a rare immune system disorder that has dealt him five life-threatening blows. It's also changed the way he goes about his life.

"When you're in overtime, every second counts. You don't know how much time you have," said Fajgenbaum, a former quarterback at Georgetown University. "It really helps you focus in on what's important and what's not important."

For a while, Fajgenbaum said he "just hoped and prayed" that someone, somewhere, would find a cure and better treatment options for Castleman disease, which kills about 35% of its victims within five years of diagnosis. Then, he realized he might be that person.

That life lesson is among several that Fajgenbaum, 34, recounts in his new memoir, "Chasing My Cure: A Doctor's Race To Turn Hope Into Action." Fajgenbuam wrote the book partly in hopes of boosting awareness of Castleman disease, which has not gained the notoriety of other rare diseases despite its deadly nature.

"We shouldn't either hope or take action – we should hope and take action," Fajgenbaum said. "I'm here on the phone because of that turning point." 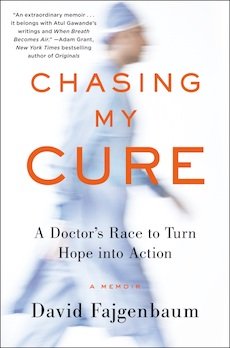 Dr. David Fajgenbaum wrote a memoir about his experience living with Castleman disease.

Idiopathic multicentric Castleman disease – the most severe form of the disorder – activates the body’s immune system, releasing an abundance of inflammatory proteins that can shut down the liver, kidneys and bone marrow. Relatively little is known about it.

Fajgenbaum, an assistant professor in Penn Medicine's Translational Medicine and Human Genetics division, has spearheaded efforts to identify more effective treatment options for people with Castleman disease. After all, he recognizes his clock may stop ticking at any moment.

Chemotherapy can keep the disease at bay for a while, but it's not a permanent solution, Fajgenbaum said. Patients tend to relapse after treatment, creating a vicious cycle that he knows all too well.

Thus far, the U.S. Food and Drug Administration only has approved one treatment – siltuximab – for Castleman disease. But it only works in about one-third of patients and Fajgenbaum is not one of them.

Fagjenbaum's research – and his personal experience – eventually led him to sirolimus, an immunosuppressant typically prescribed for kidney transplant patients. Because the drug inhibits activated T-cells, he suspected it might put his disease in remission.

"I knew if I did not start myself on a drug, there was no way I was going to make it," Fajgenbaum said. 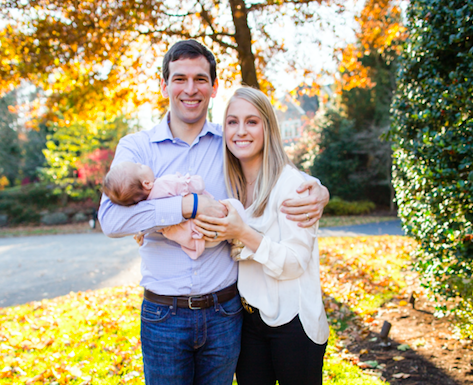 David Fajgenbuam, who is leading research efforts to identify a cure and treatments for Castleman disease, poses with his wife, Caitlin, and daughter, Amelia.

Under the supervision of his doctor, Fajgenbaum began taking sirolimus after his last life-threatening hospitalization six years ago. At the time, Fajgenbaum was simply hoping he'd live long enough to marry his girlfriend, Caitlin – something he said he once took for granted.

Since Fajgenbaum began taking sirolimus, his symptoms have not flared up.

Now, he and Caitlin have a daughter, Amelia. And Fajgenbaum is leading clinical trials examining sirolimus' effectiveness against Castleman disease. Like siltuximab, the drug appears it may help some – but not all – people battling Castleman disease.

That has Fajgenbaum wondering how many other existing drugs have been overlooked as potential treatments for other diseases. It's another lesson that he expands upon in his book.

"Sometimes, solutions can be hiding in plain site," Fajgenbaum said. "This drug I'm on is in my neighborhood CVS all these years and no one had thought to try it. How many other things are like that ... in science or medicine?"

Since writing the book, Fajgenbaum said he has heard from all kinds of people who have faced challenging health diagnoses, whether it's cancer or some other rare disease.

It's definitely moving the needle, Fajgenbaum said. In September, the month the book was published, more people Googled Castleman disease than ever before. And more people have donated funds to the Castleman Disease Collaborative Network, an organization he co-founded to expedite research efforts.

"It's really been, in many ways, therapeutic to be able to share my story, the ups and the downs," Fajgenbaum said. "Even writing it was therapeutic. To bring back some tough memories, to expose them and to face them." 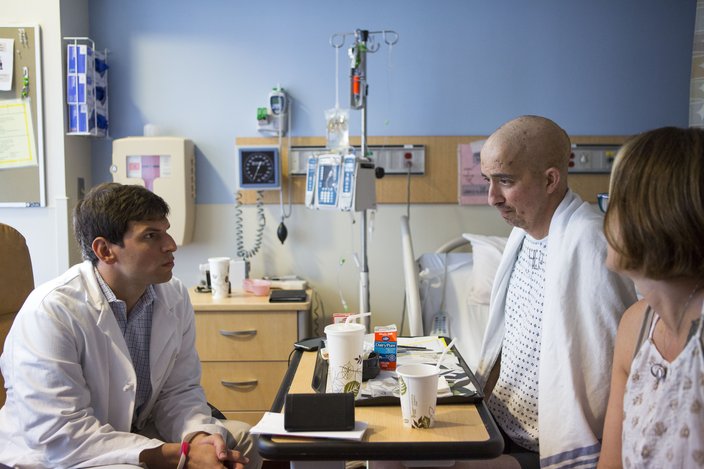 THE POWER OF HUMOR

Sometimes, Fajgenbaum said, it's best to face the tough times with a sense of humor. That's a lesson he gained from his late mother, who died of cancer when he was at Georgetown.

Fajgenbaum recalled flying to Raleigh, North Carolina to see his mother after she had a brain tumor removed. He tentatively walked into her room alongside his family, unsure what to expect. He found his mom sitting, her head shaved and partly covered by a gauze wrap.

She pointed to her head and joked that she looked like the Chiquita banana lady. 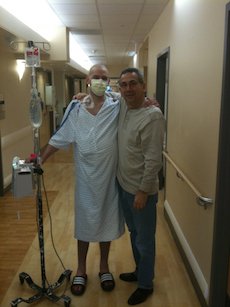 David Fajgenbaum poses with his father during one of this five life-threatening hospitalizations due to Castleman disease.

A few years later, Fajgenbaum found himself walking around the hospital with his father on New Year's Eve. This time, Fajgenbaum was the patient. His stomach was filled with 30 pounds of fluid, the result of his ill-functioning kidneys and liver.

As they passed the family waiting area, they stopped to help a man who was laying on the floor, noticeably drunk. The man thanked Fajgenbaum's father, wishing him and his "pregnant wife" the best of luck.

"We just burst into laughter," Fajgenbaum said. "I turned to my dad and said, 'Man, you've got an ugly wife.'

"If I hadn't had my mom's example ... maybe I would have just burst into tears and gone back to my room. Rather, that's hilarious. This drunk guy thinks I'm a pregnant woman because of the size of my belly."

That moment, nearly nine years ago, came just several weeks into Fajgenbaum's "overtime" session. He's overcome a lot since and learned a great deal. But he knows there's more work to be done – for him and for others.