Wharton MBA grad leading fight against rare disease - his own 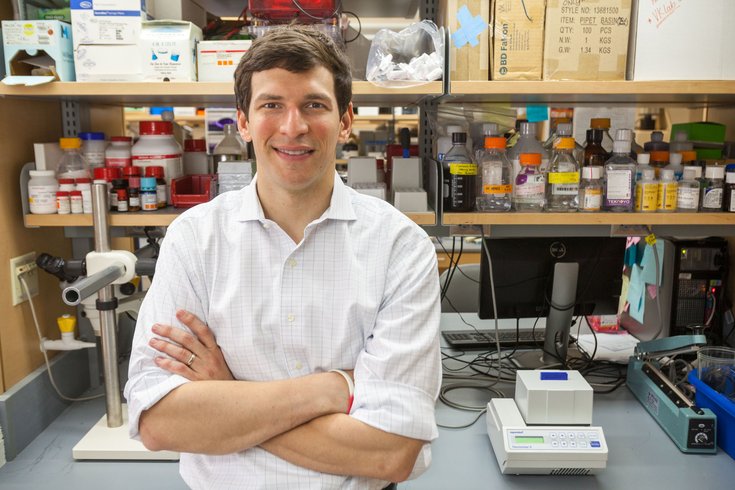 David Fajgenbaum, who will graduate with an MBA from Wharton on Sunday, was diagnosed with multicentric Castleman disease five years ago. Now, he's leading research efforts to find a cure for the immune system disorder.

David Fajgenbaum lay in the intensive care unit five years ago battling a rare disease that inflamed his immune system so badly that multiple organs failed.

A former Georgetown University quarterback, Fajgenbaum’s once muscular body bloated as his muscles atrophied. His blood platelets fell so low, he could not risk shaving.

“All of sudden you start to see him wasting away,” said Grant Mitchell, who befriended Fajgenbaum at the University of Pennsylvania. “The transformation that occurred over a couple of months was staggering and terrifying.”

At his lowest point, Fajgenbaum’s condition grew so dire that a priest delivered last rites.

“Maybe it’s blind hope, but I really have very clear hope that if we can figure out what is going on, that there will already be a drug that exists. At all times we’re a day away from curing this thing. That five-year (timeline) goes out the window once we do that.” – David Fajgenbaum

After spending parts of six months in the hospital and undergoing various chemotherapy treatments, he rebounded and resumed his studies as a Penn medical student.

But his fight against multicentric Castleman disease — an immune system disorder without a known cure — only was beginning.

Fajgenbaum spearheaded research efforts that not only have reshaped the way healthcare professionals view his disease, but also could serve as a template for combating other rare diseases.

His accomplishments have led to a bevy of honors, including being named to Forbes’ 30 Under 30 list of healthcare minds. On Sunday, he’ll serve as the student speaker when he graduates with an MBA from the Wharton School.

Fajgenbaum has done this while suffering multiple relapses and knowing that 38 percent of people diagnosed with multicentric Castleman disease die within five years. He will hit that mark in November.

The disease activates the body’s immune system, releasing an abundance of inflammatory proteins that can shut down the liver, kidneys and bone marrow.

Between 5,000 and 7,000 new cases of the disease are diagnosed each year, Fajgenbaum said. As many as one-third of those cases are multicentric, one of three subtypes of Castleman disease.

Neither the cause nor a cure is known, Fajgenbaum said. There is only 1 FDA-approved treatment, Siltuximab, though many have been tried. Reoccurrences are not unusual.

Fajgenbaum has relapsed every 15 to 17 months for the last four years, he said.

After his first reoccurrence, Fajgenbaum realized two things — that multicentric Castleman disease was not going to leave him alone and that, despite some research, very little was known about it.

Fajgenbaum took it upon himself to change both.

He has tirelessly researched the disorder, dedicating between 60 to 80 hours each week to studying the disease. He began by pouring over 2,000 case studies and co-founding the Castleman Disease Collaborative Network (CDCN), an organization connecting researchers from around the world.

“I’d like to think if I didn’t have this disease, and I was a physician or a researcher, that I would have the same urgency that I do,” Fajgenbaum said. “But I know when you got a disease, you bring a sense of urgency that you can’t describe. When people say give me a day, or give me a week or a month to do this — that’s a day or a month or a week that could be the complete difference between surviving or not.”

Together, he said, CDCN members prioritized studies to be conducted by leading research teams from across the globe, streamlining research efforts that previously had not seen much collaboration.

Research efforts yielded what Fajgenbaum labeled a “major breakthrough.” He detailed them last year in the medical journal Blood.

Researchers previously thought benign lymph node tumors released inflammatory proteins that activated the immune system and led to the dysfunction of vital organs. Fajgenbaum's research found the enlarged lymph nodes are not benign tumors. Their enlargement — and organ dysfunction — is a reaction to inflamed proteins released by the immune system.

Essentially, Fajgenbaum said, lymph node changes are now believed to be the result of inflamed proteins — not the cause.

"If this thing rears its head and it’s not responsive to the next line of treatment, I will know that I have put everything that I have into this thing. That helps me to cope with the unknown.” – David Fajgenbaum

“Before, when we thought they were tumors, we needed chemotherapy to kill the tumor,” Fajgenbaum said. “But now that we think about it as an inflammatory disorder, there are all kinds of immunosuppressants — drugs that target the immune system — that may be effective and that we’re trying out on patients right now.”

The hope, Fajgenbaum said, is that a drug that could cure Castleman disease may already exist, saving researchers — and those inflicted — years of development.

“Maybe it’s blind hope, but I really have very clear hope that if we can figure out what is going on, that there will already be a drug that exists,” Fajgenbaum said. “At all times we’re a day away from curing this thing. That five-year (timeline) goes out the window once we do that.”

Fajgenbaum, who is staying at Penn as a research professor, remains optimistic that the collaborative approach adopted by the CDCN will lead to a cure. But he also envisions the approach serving as a protocol for combating other rare diseases.

“Unless you’re doing the right research and unless you’re doing it in a coordinated process, then you’re not going to get progress,” Fajgenbaum said. “We’ve got to change the way research is done for me or anyone else with my disease to survive.”

Prior to the formation of the CDCN, Fajgenbaum said, some researchers had independently examined the disease, but there had been little coordination or networking.

These problems led Fajgenbaum to pursue a Wharton MBA after completing medical school in 2013. He also continued his own research at Penn, gaining full-time, voluntary assistance from about 20 Penn students eager to assist the CDCN. Another 100 students have sent donations, he said.

“It’s so much easier to get behind a cause and try to champion something when you can literally see the face of it,” said Mitchell, who also completed Penn’s medical and MBA programs. “You can see that such an amazing person has been stricken with it and is not just asking for money, but is asking for your skills and your time. Those things have an immediate impact.”

Fajgenbaum said the CDCN did not raise money during its first 18 months, choosing instead to review case studies, build connections and determine the best research paths to pursue.

Now, as the CDCN pursues various studies, funding is paramount. The group hopes to raise at least $300,000 this year.

It is not the first time Fajgenbaum has raised money for a cause.

He collected funds for brain cancer research after his mother, Anne Marie, was diagnosed with terminal brain cancer in 2003. Following her passing, he founded National Students of AMF Support Network, a decade-old organization that offers support to college students grieving the death of a loved one.

“This is what keeps me mentally clear,” Fajgenbaum said of his research efforts. “I’m doing everything in my power that I could possibly be doing. I’m going to have no regrets.

"If this thing rears its head and it’s not responsive to the next line of treatment, I will know that I have put everything that I have into this thing. That helps me to cope with the unknown.”

Anyone wishing to donate to multicentric Castleman disease research can do so at the Castleman Disease Collaborative Network's website.