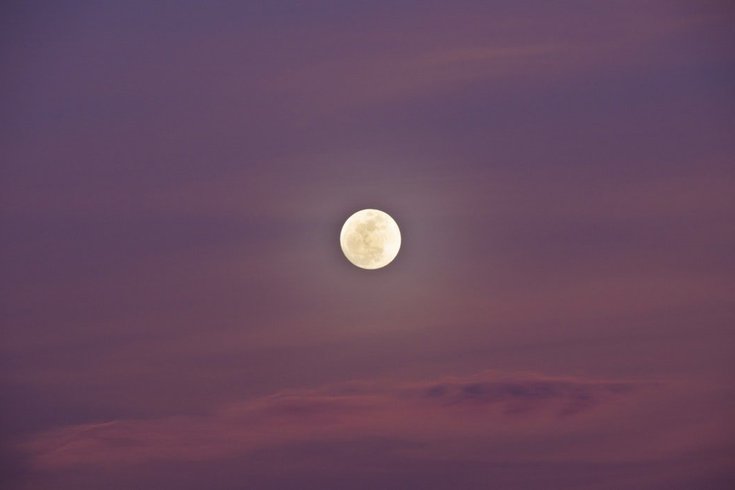 The first supermoon of the year, called the pink moon, will rise on April 26 and stay in visibility through the beginning of next week.

One of the biggest and brightest moons of the year will light up the skies next week.

The so-called "pink moon" won't actually appear pink, but it will be one of the first of three consecutive "supermoons" — moons that turn full when their orbit is tracking closer to the Earth than an average full moon.

The supermoon looks 7% to 14% larger and can look up to 30% brighter than an ordinary full moon. Experts call the first moon of spring a "pink moon" because it symbolizes the growth and blooming of flowers of the time.

You can catch the April supermoon at its fullest phase at 11:31 p.m. Eastern time on Monday, April 26. It will start to rise in the east-southeastern sky in the Philadelphia region at 7:28 p.m. Monday and will set in the west-southwestern sky at 6:32 a.m. Tuesday, according to TimeAndDate.com.

The moon's color will start yellowish and golden-orange when it's near the horizon and will give off a whitish glow as it moves higher in the sky.

Some cultures call the April full moon the egg moon, the fish moon or the sprouting grass moon for their associations with the season as well, NJ.com reported.

Keep an eye out for the other two supermoons this year. The next one will appear on May 26, which coincides with the lunar eclipse. It will be called the super flower moon or a super blood moon, named after the reddish-rusty hue given off during lunar eclipses.

The full "strawberry moon" will rise on June 24.