Nearly killed in a hit-and-run one year ago, the 23-year-old former lacrosse player takes the Liacouras Center stage 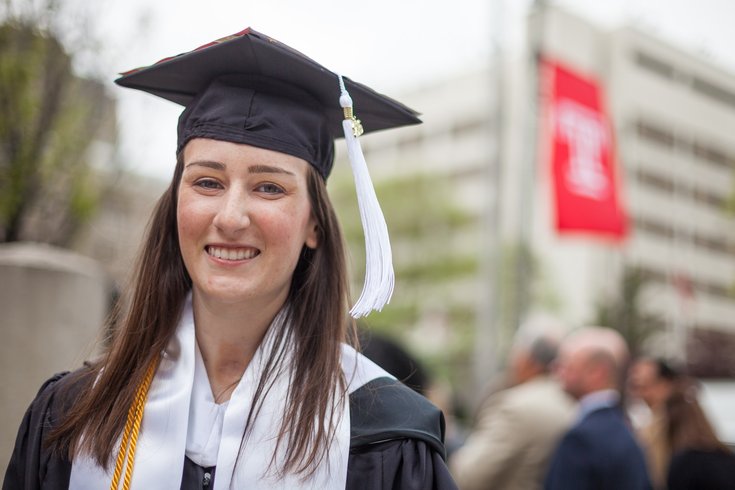 Rachel Hall outside of the Liacouras Center before her commencement ceremony at Temple University, Thursday, May 5, 2016.

At 4:19 p.m., inside Temple University’s Liacouras Center, the “Land of Hope and Glory” began playing through the sound system. Many of the 750 graduates-to-be made their way to their seats for the College of Liberal Arts' baccalaureate ceremony.

The procession, met with congratulatory yells from the stands and waves and smiles from the cap-and-gowned attendees, would take 15 minutes. Fifteen rows back in the middle section – under a cap decorated with an American-flag pattern, open-mouthed shark and the number 16 – sat 23-year-old Rachel Hall.

She welcomed everybody to the ceremony that came one day before a university-wide commencement. She noted that 58 percent of the college grads were women, 25 percent were people of color and, among them, was a 63-year-old and a class peer celebrating her 21st birthday.

“Some of you have overcome serious hardships, between work, school, family or health,” Bakley said.

Which brought her to Hall, who was wearing the St. Christopher medal her brother found on the ground a year earlier, as his sister faced challenges beyond the realm of serious hardships after a hit-and-run incident left her on the brink of death.

The vice dean let the class and their loved ones know that Hall – a double major in sociology and criminal justice – was supposed to walk at commencement in May 2015, a celebration made impossible by the fact that she was in a coma.

“She fought her way back,” Bakley said, “and she will walk with the class [today].” 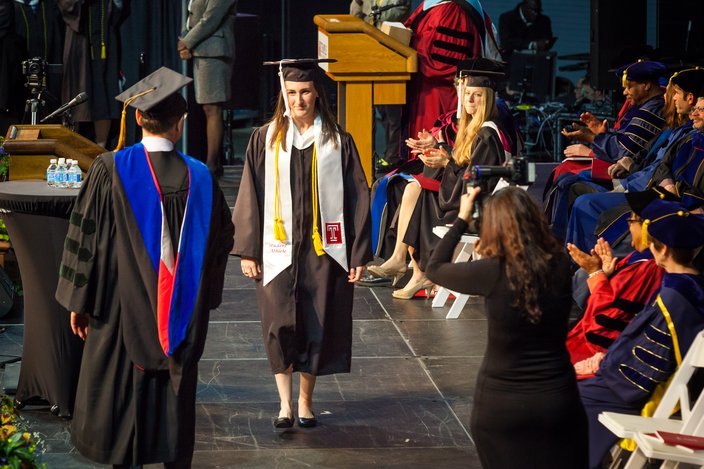 Rachel Hall walks across the stage of the Liacouras Center during the commencement ceremony for the College of Liberal Arts at Temple University, onThursday, May 5, 2016.

Those words were met by a rousing ovation from those inside the Liacouras Center, where Hall’s support network sat in a section with a straight-on view of the stage.

There were speeches about perseverance. One came from that 63-year-old grad who returned to finish a degree he was one course shy of earning during his 1984-87 run on North Broad Street. Another was courtesy of a fellow grad whose best-laid plans turned into an 11-year quest for a diploma thanks to Lyme disease.

Perseverance. The theme of the day.

As the 14 rows of peers sitting before her made their way to the stage to hear their names called and shake hands with the dean – diplomas will be mailed out in the near future – Hall smiled and chatted and laughed.

A minute before 6 p.m., after adjusting her cap and walking up the center aisle toward the stage, it was her turn.

When the name “Rachel A. Hall” was announced, it was met by more applause.

A year ago, Rachel Hall was in a coma after a hit-and-run. She just walked at @TempleUniv lib. arts graduation. pic.twitter.com/1sMrymPV8b

Then, she was off to the side of the stage for a photo and the walk back to her seat before the ceremony closed 18 minutes later with a “Bon Voyage.”

It was a long day, which Hall started at the honors ceremony. On Friday, she will again don the cap and gown for Temple University’s 129th commencement, which starts at 10 a.m. at the Liacouras Center.

But around 6:30 p.m. on Thursday, Hall stood on a crowded sidewalk along North Broad, texting her mother, with whom she had to catch up for the ride home to Mullica Hill in South Jersey.

She was asked how it all felt, the events of the day after a grueling year of rehabilitation that led up to it. She offered a smile and a one-word answer.