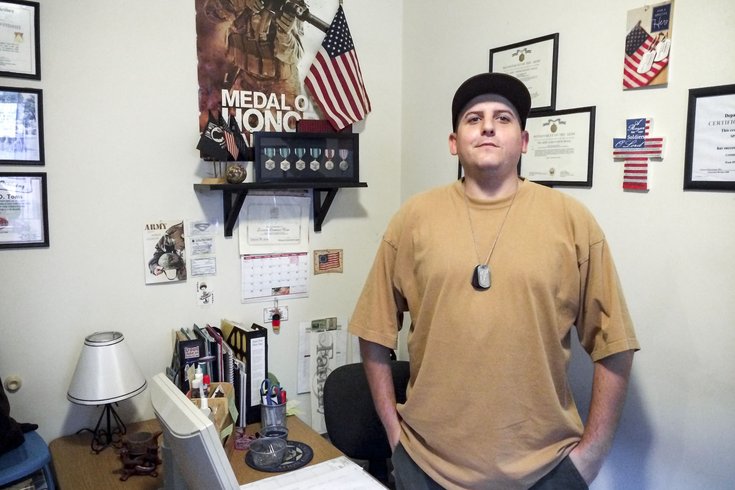 Damon Toms prominently displays his Army medals and memorabilia within his apartment at Buchman Meadows, a Chester apartment complex that offers low-income housing to veterans encountering homelessness and financial hardships.

Damon Toms says his life had sunk to its lowest point when he moved into Buchman Meadows nearly five years ago.

The Army veteran was struggling to adjust to civilian life after serving two tours of duty in Iraq. He suffered from depression and Post Traumatic Stress Disorder. He had battled drug addiction. He and his wife, Jackie, had little money.

But Toms found a home at Buchman Meadows, a Chester apartment complex offering low-income housing to veterans struggling with homelessness or financial difficulties. So have dozens of other beleaguered veterans.

“This place has saved my life, for sure,” said Toms, who grew up in Pittsgrove, Salem County. “I was down and out. I’ve been turning my life around.”

Toms, 34, regularly volunteers for various tasks at Buchman Meadows and serves as a building captain. He remains on disability but does some work repairing computers.

Toms’ story may not be typical for a veteran. But it is not unusual, either.

Some 50,000 veterans were homeless in early 2014, according to federal statistics, though that marked a 33 percent reduction from 2010. Many others have encountered financial hardships.

Buchman Meadows has played a small part in reducing veteran homelessness. Within six months of opening in December 2010, the 42-unit complex was at capacity. It has remained full ever since. As one tenant leaves, another veteran is ready to move in.

“The mission remains,” said Dominic Frangelli, one of several Delaware County investors who funded Buchman Meadows. “We feel we’re getting closer, but the applications don’t slow down.” 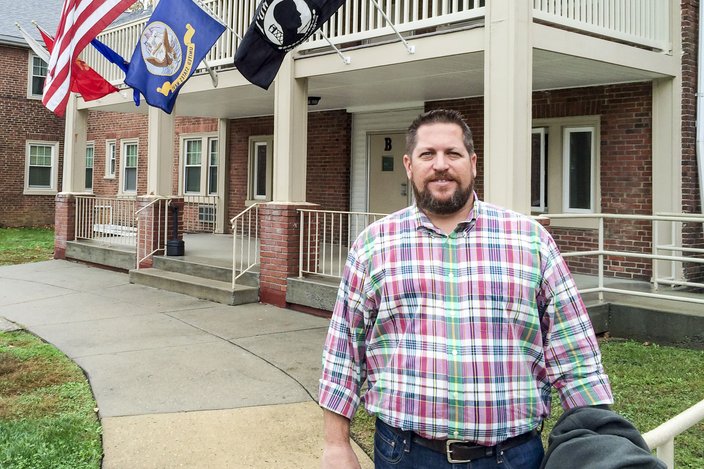 Dominic Frangelli is part of a Delaware County investment group that spent $2.5 million to renovate Buchman Meadows, a building that originally was constructed as part of a war town that housed shipbuilders during World War I. (John Kopp / PhillyVoice)

The investors initially sought to transform Buchman Meadows into a fair-market housing complex. But after researching its history, they thought otherwise.

The building was constructed in 1917 as part of Buchman Village, a war town created to house shipbuilders during World War I. It later served as a veterans hospital. Now, it is helping veterans get back on their feet.

“Since I’ve been living here, it’s been great for me,” said Robert Smith Jr., a 54-year-old Army veteran who moved into Buchman Meadows last December. “I’ve got peace of mind. I enjoy my apartment. It’s not a bad place to live.”

Veterans rent one- or two-bedroom units for rates that fall about 20 percent below fair-market value. Many also receive subsidies from the Chester Housing Authority through its Project-Based Voucher Assistance program.

The complex currently houses 41 veterans whose average annual income is $14,204, according to data provided by CHA. The average tenant share of rent is $118 per month.

Buchman Meadows serves as a service broker, pointing veterans to organizations that can provide necessary social services. The complex also accepts and distributes donations, including food, furniture and clothing.

Two former tenants have since become homeowners. Several others moved out to rent houses. One veteran obtained a college degree while at Buchman Meadows. Others are attending school.

While Buchman Meadows points veterans toward social services, it also provides them with a shared experience.

“I think what we have created is community,” said Mary Militello, CHA director of housing choice voucher programs. “They certainly hang together. It is that military-experience community that has helped us.” 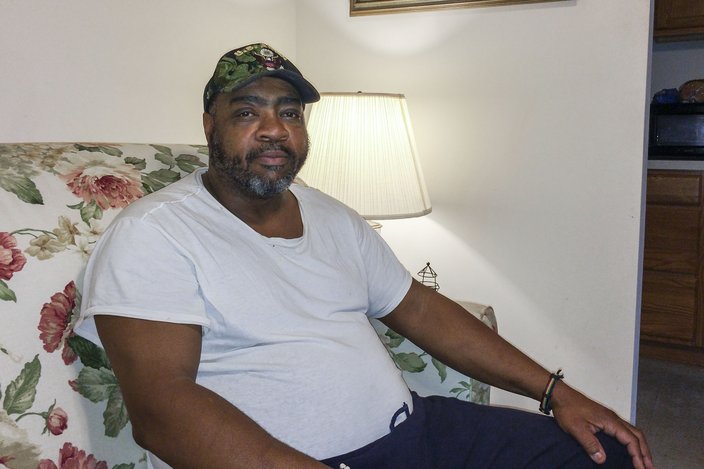 Army veteran Robert Smith Jr. sits in his apartment at Buchman Meadows, which he says brings him a "peace of mind." (John Kopp / PhillyVoice)

The veterans, whose experiences have encompassed World War II through the latest conflicts, are known to congregate on the porch during the warmer months, sharing stories and boasting of their branches.

Toms said he found a companion in a Vietnam veteran who could relate to his struggles with PTSD.

He has decorated a room with his Army awards, medallions and memorabilia. Nearly five years after he first moved in, Toms remains grateful to Buchman Meadows for providing him an opportunity to re-establish himself.

“They let us move in when we were at our poorest,” Toms said. “We didn’t have any money. Thank God for this place.”