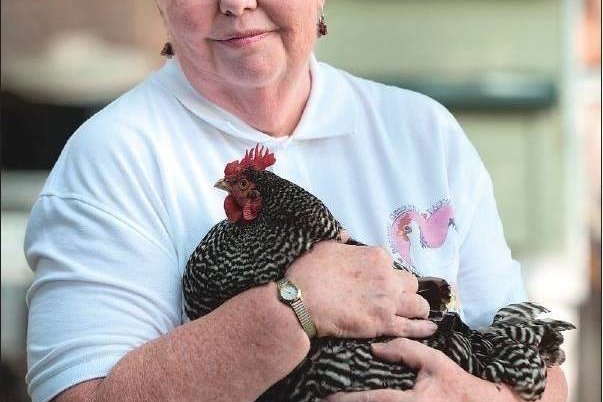 Gwenne Baile is teaching a class on tending chickens Sunday in Camden County as part of plans to allow backyard chickens in Haddon Township on a pilot program.

Chickens are coming home to roost in Haddon Township, part of a backyard chicken movement sweeping American suburbs, an extension of the sustainability movement.

Chickens are also an illegal underground movement in Philadelphia.

Though chickens are officially banned in the city, one store in the Mount Airy section sells $2,000 worth of chicken feed a month – enough to feed 600 chickens for 30 days, according to a worker at Weaver's Way, a co-op.

But the birds are coming out into the open in densely-developed Haddon Township, which is conducting a one-year chicken pilot.

The program is limited to 25 families, allowing up to four hens – the no-rooster provision means no noise and no growing flock of chicks. No egg sales are allowed. A license, which includes an inspection of the required coop, is required.

The program, which begins in February, will be evaluated at the end of a year.

The three elected township officials who approved the pilot program for the township did not respond to requests for comment from PhillyVoice.

Nick Mink, who had served on the town’s dual zoning and planning board, which rejected the proposal in 2014 only to have commissioners approve the pilot program last summer, said he’s not sure how or why the reversal of the board’s advisory decision came about.

He’s since quit the board.

He said two real estate appraisers have told him that the nearby presence of chicken coops would definitely drag down appraisal prices for homes.

Before becoming a poulterer in Haddon Township’s pilot chicken program, you need to attend Chicken College: “The Basics of Backyard Chickens in the Suburbs and City.”

Gwenne Baile, who refers to herself as a Mamma Chicken and is technically chairwoman of Camden County Chickens, oversees the class with Maureen Breen, the chairwoman of Philadelphia Backyard Chickens.

Primex, a garden center in Glenside, Montgomery County, has “at least doubled” the number of chicks it sells since it began meeting the demands of backyard poulters, according to Nickie Goldstein.

The business sells several types of chickens, all good for egg laying, and one variety that does double-duty as a layer and a meat chicken, said Goldstein.

FAR Wind Egg Farm in Winslow Township, which sells pastured eggs, including at the popular Collingswood Farmers Market, is also available as a source of eggs for hatching or chicks.

The reality is that chickens have something of a shelf life as laying chickens, in their prime for the first year or so, then tailing off, Goldstein said.

By the time a layer hits the age of 6, laying has stopped or is very sporadic, though they keep eating up to three cups of feed per bird each day. Chickens can live about 8 to 10 years.

By the age of two, the hens' meat is tough, useable only for soup or stew. Goldstein said meat chickens are generally slaughtered before they hit a year old, and often at just a few months.

But Goldstein said her customers tend to treat chickens past their egg-laying prime as pets.

In fact, the Haddon Township program does not permit a chicken owner to slaughter a bird within the confines of the township – though owners are free to take the birds elsewhere and dispatch them.

“We don’t want someone to think it is time to make soup and the neighbor children to see,” said Baile, a retired nurse-midwife.

“We don’t euthanize our dogs at eight because they are slowing down," she said. "I can never see myself making soup. In fact, I’m not sure how I’ll feel about eating chicken, which my husband likes. It might be an issue,” she said.

If you have not pre-registered and paid the $10 fee, arrive at 12:30 p.m. The program is open to all, not just township residents.

To register or check and see if the program is still on despite the weather, you may email her at gbaile@verizon.net or call her at 856-858-6644.