On the Chip Kelly draft board nonsense 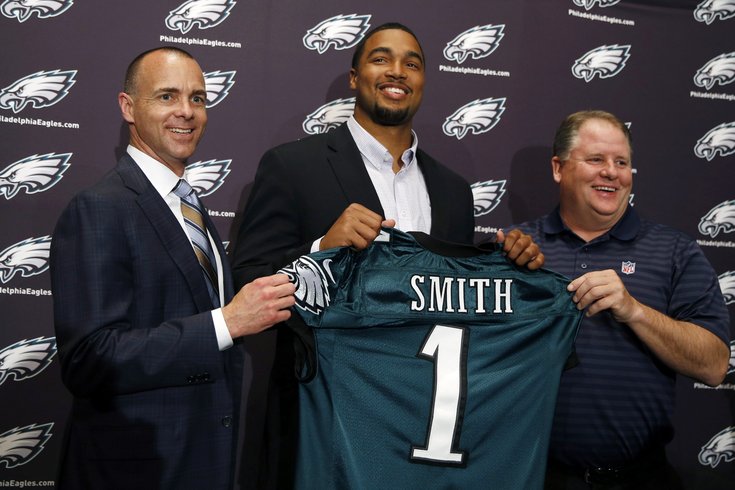 When Chip Kelly enters the war room, prospect nameplates shake like iPhone apps that are about to be deleted.

Many Eagles fans are suffering from "Chip fatigue," which is understandable. For the first time since he was fired, Chip Kelly spoke with Philly reporters at the owners meetings a week ago, and had more than a few interesting comments. As a result, they were covered in depth. The Chip stories have, however, carried into the following week and are beginning to get ridiculous.

A report from NJ.com recently surfaced stating that Chip Kelly alienated scouts during his time in Philadelphia, ignoring their player analysis and drafting whoever Kelly wanted. From the report:

"Right before that draft, the scouts set the board," the person said Tuesday. "Then Chip got a hold of it and totally turned it around. Scouts had no say at all in that draft. Anybody that Chip didn't want, that player's card got removed from the board and thrown in the trash. Those guys were never even in the discussion.

"Almost immediately, you had a lot of scouts looking around and wondering, 'Why am I even working? Why the hell are we even here?' We put all of this work in, put the information in and Chip changed everything and took whoever he wanted to take."

According to a source, the notion that Kelly just started skeet shooting with prospect nameplates "right before the draft" is "totally untrue." While Kelly may have frustrated scouts because he would eliminate players on whom the scouts created reports, mostly due to character concerns, he did not stroll into the war room with the music from "The Good, the Bad and the Ugly" playing in the background before completely changing the draft board.

It's the job of NFL scouts to write reports and analysis of players to help give the decision makers a full picture of prospects. They are considered in the present, and cataloged for the future. Oftentimes, decision makers will completely dismiss a player that a scout likes, or fall in love with one a scout does not like. The decision makers will win that standoff 100 percent of the time. Scouting can be frustrating, unfulfilling work, but that's the job.

And it happens everywhere. For example, Tommy Lawlor of IgglesBlitz.com noted that even sweet, cuddly Andy Reid dismissed his scouts' recommendations when he drafted Jaiquawn Jarrett in the second round of the 2011 NFL Draft. The scouting department felt that was bad value, but Reid went ahead and took him anyway.

To be clear, we're not calling into question NJ.com's reporting. Rather, it's more likely the former scout (one person) referenced in their report is grossly over-exaggerating Kelly's actions.