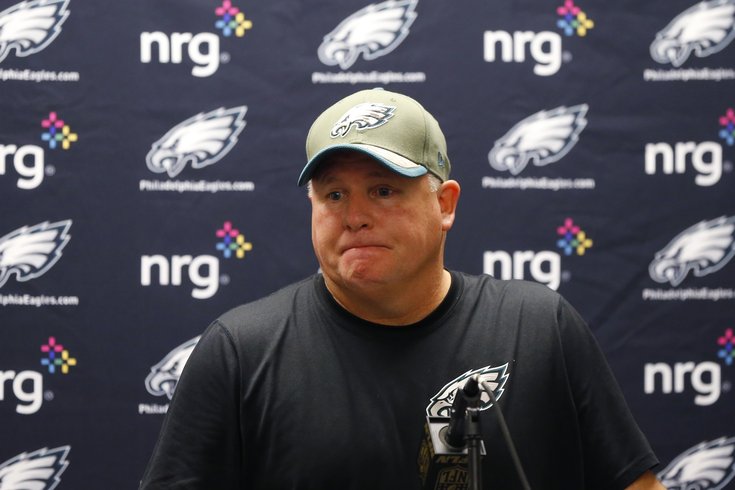 Chip's culture is not withstanding a disappointing season.

DETROIT -- Jason Kelce is exactly what Chip Kelly, or really any coach, wants in his players -- a robot. Kelce is a conscious robot, in my opinion, in that he knows that being a robot is what is best for the team, but a robot nevertheless who will do whatever the coaches ask of him, never questioning their methods. To be clear, in no way is it a bad thing that Kelce is a robot. If you could have 53 robots on one team, you'd really have something.

When asked if he felt that everyone on the team was buying in the same way that he does, Kelce went full-on robot.

Kelce has not had a good season, however, he has taken accountability for several of his performances in losses this season. It's clear he believes that his teammates should do the same.

"The reality of the fact is, I think we have good leadership," he explained. "I think we have players on the team who can keep each other accountable. And the only way teams get out of these funks or fix these things is to take a long hard look in the mirror and get it fixed. And that’s everybody, across the board. This is a group effort whenever you get your ass kicked like this two weeks in a row."

"There are doubters and people that don’t trust their teammates, people that don’t trust their coaches. Those are losers. That’s the way you lose games. And obviously we’re losing a lot of games right now. We’re not doing very well. But that’s not ever going to change my approach, my trust in the players in this locker room and the coaches that are telling me what to do."

As we are all well aware of by now, Chip Kelly has put an extreme emphasis on bringing in and/or retaining players he feels are good culture fits. He infamously jettisoned some who were not. Kelce, clearly, is a high character player among several others on the Eagles roster.

Unfortunately, Kelly likely realizes that he asks his players to buy in on a hell of a lot more than other coaches around the league. Faster-paced practices, far fewer days of rest, and pressure to adhere to other sports science measures like sleep monitoring are just a few examples of that. And so, Kelly's emphasis on players who will buy in is really more of a necessity than it is some kind of innovation.

Unfortunately, it's also unrealistic. If this were the NBA, a few star players with high character can keep a 12-man roster in line. In the NFL, you are never going to get anywhere near 53 players to buy in to your approach, unless of course you're winning, which obviously, the Eagles are not.

When Kelce says that people who don't trust their coaches are "losers," he's partially right. A football team is obviously going to operate more efficiently when there's 100 percent cohesion. Unfortunately, that doesn't exist. The "losers" who begin to let doubt creep in, I would argue, are simply human.

In Kelly's last six full years as a head coach at either the college or professional level, he has racked up an extraordinarily impressive record:

During those six years, Kelly's culture initiatives were never really put to the test of losing. Now that it has, we're seeing how the players have responded, and that response shows that a great culture foundation was never really there in the first place.