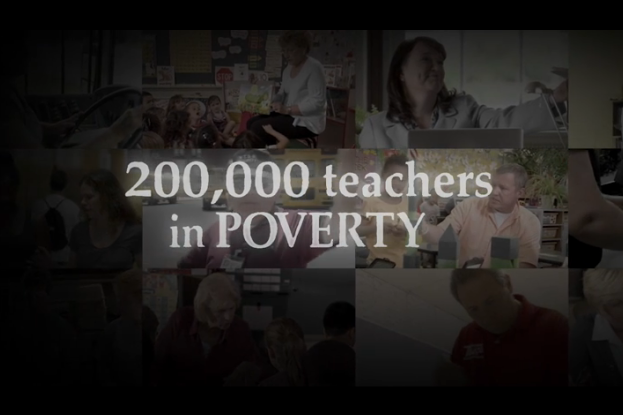 The NJEA will pay $750,000 a week to air a new ad highlighting funding gaps in the state's pension system.

Teachers in New Jersey have hit the airwaves with a challenge to Governor Chris Christie over the state's pension funding crisis, which escalated to the state Supreme Court earlier this month.

The New Jersey Education Association, the state's largest public labor union, introduced a new multimedia ad on Thursday that charges Governor Christie with underfunding the pension system in order to balance multiple state budgets. In just 12 years, the teachers union warns, more than 200,000 retired teachers could be left in poverty.

More than a dozen public worker unions have a stake in the current court battle over whether pension obligations are a "constitutionally protected contractual right," according to NJ.com.

The Teachers' Pension and Annuity Fund is the largest in New Jersey, accounting for more than $3 billion in state payments since 1996. This year, however, the state is on track to contribute $380 million to the fund against $752 million that the union says teachers will have paid by the end of the year. A review of the fund's actuary report by NJ.com found that in 2027 it will run out of money, with $29 billion on hand to cover almost $54 billion in pension promises.

On Wednesday, a spokesman for Christie called the NJEA ad "fear mongering," while Christie himself has attempted to reign in the state's insolvent public pension system since imposing cuts in 2011. The current legal contest erupted after an additional $1.57 billion in proposed pension cuts were challenged by the state's unions as a violation of terms.

With New Jersey's public pension system ranked the worst funded in the United States, the NJEA ad and the issues it highlights may further compound doubts about Christie's viability as a presidential candidate.