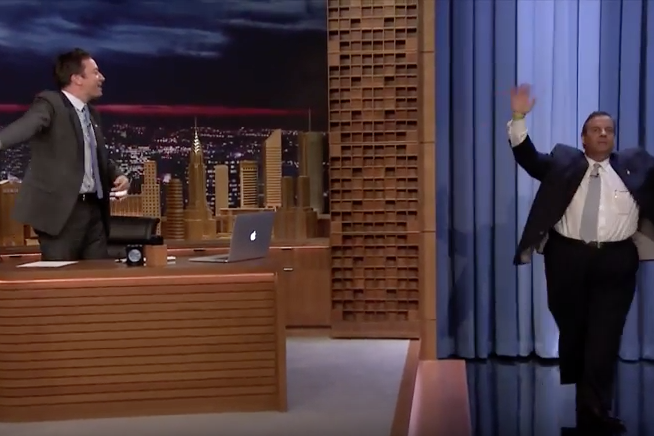 The Tonight Show with Jimmy Fallon/Youtube

Jimmy Fallon, like any comedian, could not resist slipping in a joke about Chris Christie's weight when the Republican presidential candidate tried telling a story about ice cream.

During an appearance Monday on "The Tonight Show," Christie was regaling about a time he and Marco Rubio stayed with Mitt Romney in the coastal town of Wolfeboro, New Hampshire, recently.

Christie said his family, the Rubios, and the Romney clan went on a boat ride during their stay, and after pulling into the dock, Mitt suggested they all go get ice cream.

The New Jersey governor said his reaction to getting some sweets was "alright," but Fallon, referencing his weight, said his reaction had to have been a little more excited. After Christie catches on, he (jokingly) walks off the stage and then comes back with a zinger of his own.

Christie went on to joke about being ignored during the first GOP debate.

One candidate who can't make that complaint is Donald Trump, who is set to make a Sept. 11 appearance on "The Tonight Show." If Fallon couldn't help poking fun at Christie's heaviness, he should have a field day with Trump.