City breaks ground on memorial to victims of 2013 building collapse

"I'm so sorry, I'm so sorry," Mayor Kenney told members of the families of the six victims of the tragedy. 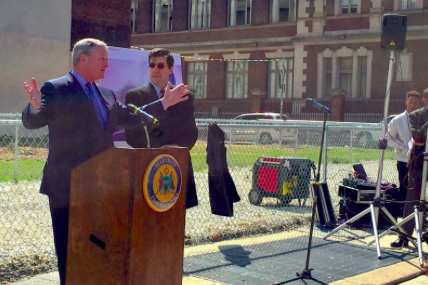 On June 5, 2013, six people died and 14 were injured when a building collapsed onto a Salvation Army Thrift Store at 22nd and Market streets in Center City.

On Wednesday, almost three years later, city officials joined with members of the victims' families to break ground on what will be a memorial park for those who lost their lives.

"Our hope is to send the lasting message that human life should take precedence over any development," he added.

Called The June 5th Memorial Park, the memorial will consist of a park with three stone pillars engraved with the names of the six victims as well as the poem "Unable are the Loved to Die" by Emily Dickinson. The $3 million park will be financed by private donations, contributions of labor and a donation of land valued at $700,000 by the Salvation Army.

It is expected to be completed by the fall. 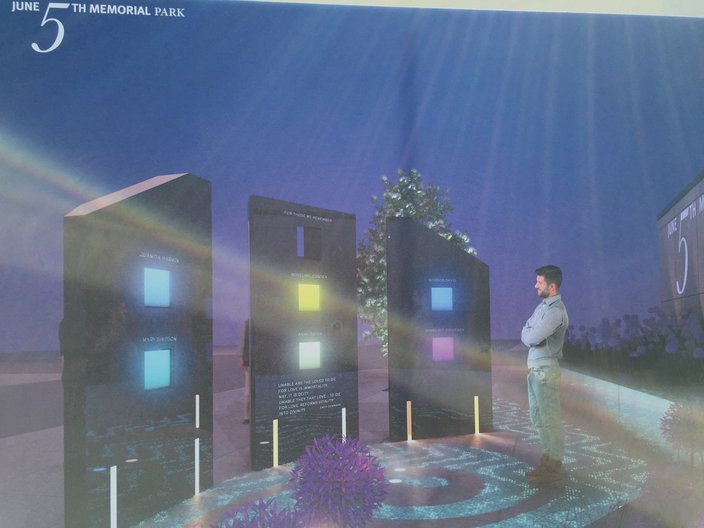 A rendering of what June 5th Memorial Park is expected to look like once it's completed.

"Unable are the loved to die, for love is immortality," recited Nancy Winkler, the mother of collapse victim Anne Bryan, sharing a stanza from the poem with the gathered crowd.

Along with her 24-year-old daughter, an aspiring artist, Winkler remembered the five others who died that day: Mary Simpson, 24, an audio engineer; Kimberly Finnegan, 35, who was newly engaged and had started a job at the shift store that morning; Roseline Conteh, 35, a nurse, originally from Sierra Leone; Borbor Davis, 68, a Salvation Army employee; and Juanita Harmon, 75, a retired secretary.

"The victims were a cross section of Philadelphia and the region," Winkler said. "We are here to remember that they were crushed to death in a Third World-style disaster."

In discussing the tragedy, Winkler noted the suicide of Ronald Wagenhoffer, 52, the City Department of Licenses and Inspections official who was tasked with inspecting the demolition site.

She also thanked the many people and organizations involved with the development of the memorial park.

In his remarks, Kenney pointed out that several individuals involved in the collapse have been punished. Griffen Campbell, a construction contractor, was initally charged with six counts of third degree murder, but was instead convicted of involuntary manslaughter and sentenced to 15 to 30 years in prison.

Sean Benschop, the operator of the excavator used in the collapse – he tested positive for marijuana and admitted to police that he had been taking codeine and Percocet – pleaded guilty to charges of involuntary manslaughter and was sentenced to seven-and-a-half to 15 years in prison.

Without naming names – including Richard Basciano, owner of the building that was being demolished, but not charged in the collapse – Kenney said that while two men were punished, the one who chose to have the demolition done quick and cheap wasn't charged.

He said that he hopes the memorial park will last as an everlasting sign that the city will endeavor to make sure something like this doesn't happen again.