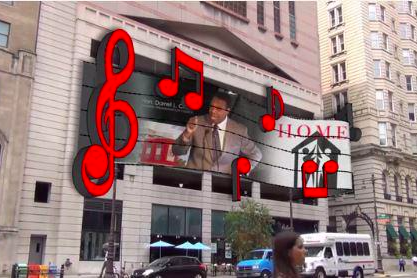 A sample of a possible 3-D billboard in Center City.

The City Council’s Committee on Rules unanimously approved a bill Tuesday that would allow three-dimensional digital displays to be built at a few key corners in Center City, CBSPhilly reports.

Catalyst Outdoor, a Malvern company, will be constructing the 3-D electronic billboards, which will range in height from about 30 to 50 feet. The company calls the structures “Urban Experiential Displays,” or UEDs.

The firm’s founder, Thadeus Bartkowski, proposes three locations — outside the Convention Center, across from Reading Terminal Market and on the facade of the Bellevue Hotel garage on South Broad Street.

He says 70-percent of the content displayed would be ads, the rest would be PSAs and other material — including promotions for local non-profits: “What’s trying to be created here is a pedestrian-viewer experience, not just a simple single form of technology."

While committee members approved the proposal unanimously, the displays are not welcomed by all. Last week, the Planning Commission voted 6-2 against the measure, and at the council meeting, the Center City Residents Association expressed opposition because of the magnitude of the signage.

The bill now heads to the full Council for a vote.

The Philadelphia Business Journal conducted a poll in which their readers overwhelmingly supported the idea of the billboards.

-61 percent said "They make the city seem vibrant and contemporary."

-25 percent said "The ads are crass and detract from the city's sense of history."

-7 percent said "at least if you're looking up at the ads, you aren't looking down at all the trash in the streets."